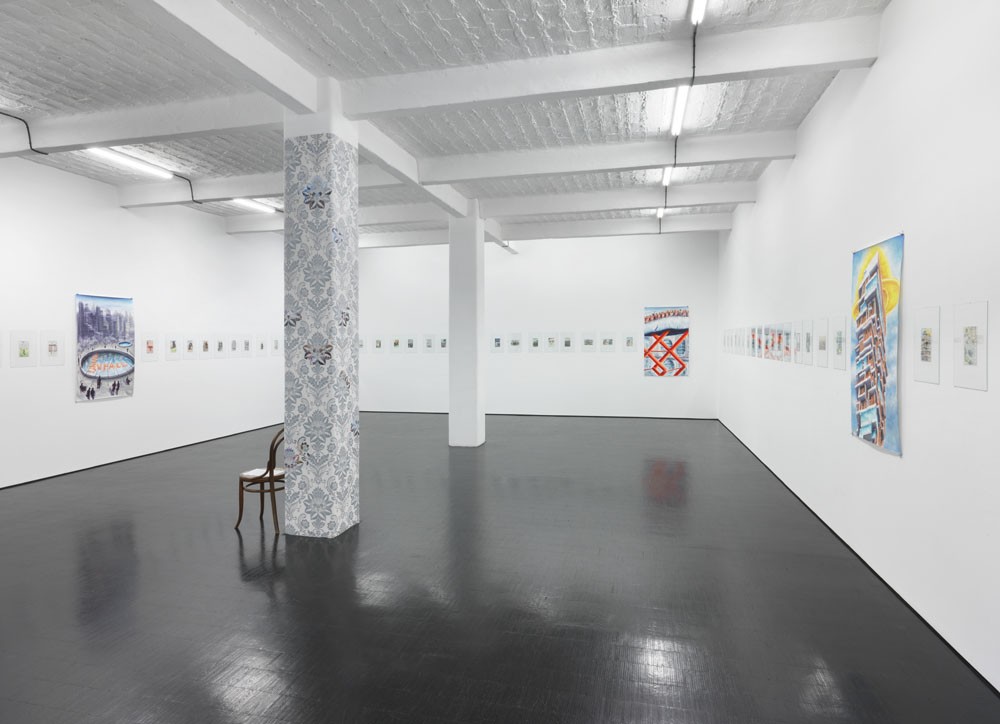 Galerie Barbara Weiss is pleased to announce Andreas Siekmann's fifth solo exhibition at the gallery, featuring a series of watercolors and an installation, which relate in various ways to the social sphere within our current situation. Falsche Freiheit (False Freedom), as the series of watercolors is called, consists of a number of fictional proposals for artworks in public space. The installation The Big Four, meanwhile, attempts to portray the steps toward privatization currently being taken in Ukraine under the aegis of the World Bank, the International Monetary Fund, and the European Union.

Siekmann has been working on Falsche Freiheit for the past two years, a period of time in which public space, or the question as to what public space actually consists of, gained a new sense of urgency. The artist's proposals for hypothetical artworks – dealing, for example, with the refugee crisis, public–private partnerships, or tacky investment architecture – strive to distill political realities into effective representations while in the same moment revealing the impossibility of adequately doing so. Along the way, something goes wrong, and the results gear towards empty monuments, caricatures, or farce. This failure relates to imagination; the artist couldn't help projecting onto public space as a standard of artistic production. The proposals acknowledge this misstep and the desire it betrays, while at the same time, they are crisscrossed by bold headlines: an avalanche of world news, which slips in between the space of projection and perhaps claims that what we understand as publicity – democratic participation in the social sphere, in living spaces, and regarding existential resources – no longer exists or even never did. Still, the longing doesn’t cease.

The Big Four is a concrete case study of the processes leading to the erosion of public space. Sewing patterns for mens' suits, displayed like flags, depict events that recently took place in Ukraine. The country, which has been bound to the EU since an association agreement in 2014, undertook – following pressure from financial backers, namely the World's Bank, the IMF, and the EU – extensive and long-term privatization. What's more, it came to serve as a test site for new 'security concepts' and biotechnological experiments forbidden within the EU under current law. The expression 'The Big Four' refers to monopolistic formations found in various world markets, numerous cases in which four organizations control a large portion of the market – examples can be found in the fields of business consulting, ratings agencies, and agriculture. Andreas Siekmann's installation links this concept to the Bible's Four Horsemen of the Apocalypse, each of whom lays waste to a different domain by unique means. Siekmann uses sewing patterns to illustrate the economic plans devised by corporations, think tanks, and lobbyists from the EU, the US, Germany, China, and Saudi Arabia, which have fought long and hard to secure considerable influence. Such activities are typical in the case of – what has since 1989 been known as – a 'transition economy'. Siekmann's work consists of four elements from the pattern for a suit, each relating to a different actor involved in the process of transformation:

The left leg: the detention centers, under instructions from the EU, in the forests near Pavichno, Zhuravuchi, Martyniwske, Volyn, and Mukachevo. The willingness to cooperate that is expected of Ukraine: sites to which the EU can outsource torture and unlawful imprisonment.

Half suit jacket: The three organizations working together in the case of Ukraine are the World Bank, the IMF, and the EU commission. They tie accession prospects and credit prospects to conditions on commodifying political opportunities for making choices as well as rights. The Ukrainian administration, with its arsenal of governmental accounting resources, ensures that the conditions become realities without any alternatives.

Right leg: The other arsenal consists of structured financial products, by means of which the infrastructure and the resources of a given country can be appropriated. They include joint-venture, leasing, and cross-border agreements. Portrayed here through the example of flex crops, genetically modified seeds that can be purchased according to the state of the global market for food, biofuel, animal feed, or as humanitarian aid. For that reason, agriculture is taken into account as a factor in the trade of futures.

Horse's head: SWOT analysis is an important instrument for investors in evaluating a country's prospects and weaknesses. On the reverse, viewers will find the possible objects of these analyses and valuations. The profits, which have now been rated, need only be verified.

An earlier version of this work was included in School of Kyiv, the 2015 Kyiv Biennale.
www.galeriebarbaraweiss.de