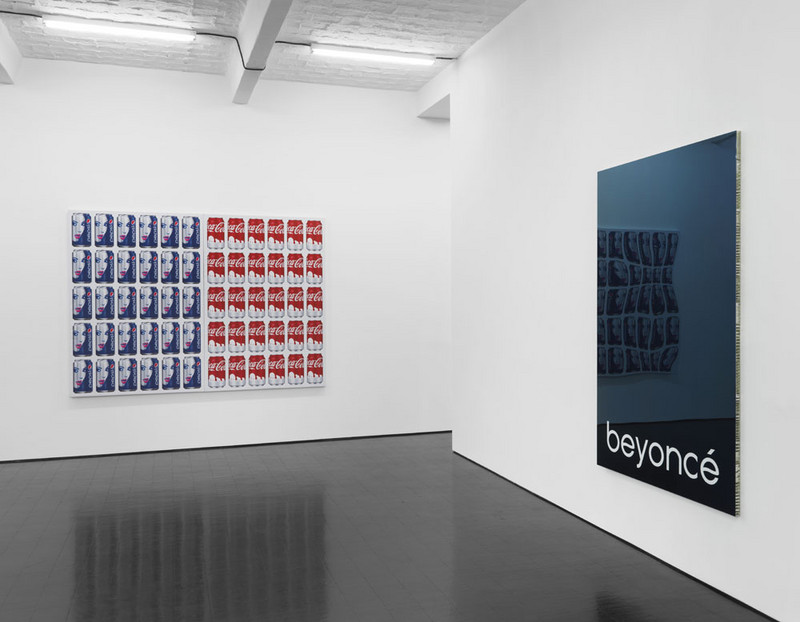 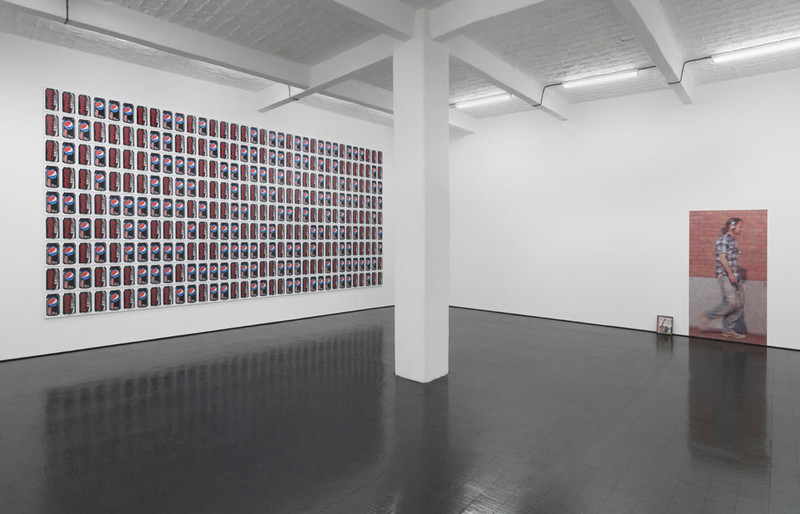 
Galerie Barbara Weiss is pleased to present Mrs. Carter and the Diet Cola for Men War, featuring new work by New York artist Jonathan Horowitz. Here, Horowitz continues his subtle and incisive analysis of the current zeitgeist, refining a number of recurrent themes in his body of work. While past conceptual video and photo-based works have focused on topics including the cultural and political implications of vegetarianism, the LGBT movement, environmental activism and the harsh, media-orchestrated division of the American political landscape, his new exhibition centers on the ambiguity of the publicly-staged rivalry between large corporations, celebrity endorsements and the shifting identity of the consumer today.

Horowitz’s reference to the notion of the image in Pop Art is especially prominent in his Diet Cola for Men War (306 Cans), a work reminiscent of Warhol’s silkscreens showing consumer products, though it also recalls the composition in Picasso’s monumental war painting Guernica. 306 small canvases, each emblazoned with a can of soda, form a large mosaic of tautological market leadership. The brand rivalry between Pepsi and Coca-Cola – two companies with almost indistinguishable products – has also appeared in earlier works by Horowitz. Since the brand colors of the respective soft drinks match the visual branding for the U.S. Democratic and Republican Parties, this perceived antagonism has tangible political implications. It also becomes a broader metaphor for today’s economic and politic system, one in which “enemies” are in fact best friends who share the market and propel each other forward. The cola cans in this work sport the corporations’ latest marketing campaign for their calorie-free soft drinks. In this case, the hyper-masculine look of the products is explicitly geared toward men and is supposed to dispel the femininity commonly associated with dieting.

Given the impartial juxtaposition of both designs, Horowitz’s works do not appear as anti-consumerist. Rather than follow the well-worn path of classical consumer critique, these fictionalized designs for consumer products are taken for granted as an inherent part of culture today. Consumer product marketing forms a semiotic system that we should learn to read if we are to deal with it consciously and appropriately. For Horowitz, these soda cans are an authentic reflection of a culture in which obesity has become an epidemic and gender roles are exaggerated to the point of self-caricature.

This attitude toward consumer products as cultural artifacts becomes even more evident in the second body of work exhibited in the show, where American pop star Beyoncé – under her newest moniker “Mrs. Carter“ – takes center stage. The singer was named the spokesperson for Pepsi at the start of 2013. In juxtaposing Pepsi cans with the outlines of Beyoncé’s face and Coca-Cola cans displaying a family of polar bears, Horowitz alludes to the racial subtext of these designs and marketing campaigns: While the polar bear is informed by a cultural anxiety (white people’s fear of their own “extinction”), Beyoncé represents an almost superhuman figure and a new, mixed-race world order. In another work made from reflective steel on an aluminium honeycomb panel, Horowitz merges the “Beyoncé” brand iconography with that of Pepsi, and in doing so seems to suggest an almost cyborg-like quality to the pop star’s brand as displayed in public. Her potential for consumerist projections is seemingly endless. No public figure endorses more brands in the U.S. than Beyoncé. The universality of her public performance appeals to virtually every demographic and race.

The work of Jonathan Horowitz exudes the deeply democratic belief that art does not have to be separated from other spheres of public life. To some extent, the artist attempts to restore the image of some of its long – lost classical power – the power to entertain and to inform, and to affirm or undermine existing power structures. The works Man and 95 Dots form an almost corporeal counterpoint to the rest of the exhibition: In Man, a framed copy of an Art in America magazine cover showing a sculpture by Joel Shapiro leans against a wall – right next to an enlarged detail of the same magazine cover, where we see a man wearing headphones and work clothes, walking behind the large sculpture. 95 Dots, on the other hand, is a collaborative project for which Horowitz has asked 95 artists to paint an eight-inch dot onto a canvas, using nothing but paint and a brush. The individual canvases stand in stark contrast to the smooth aesthetics of consumer goods seen in the rest of the exhibition. Each of the dots is slightly different in size and shape, and carries the traces of an individual artist’s hand.