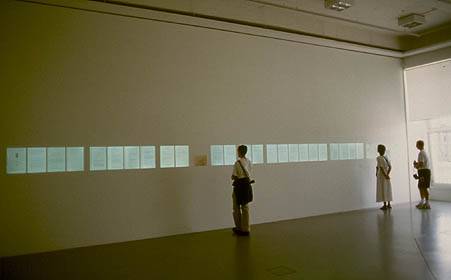 Maria Eichhorn became internationally known through her participation in the exhibition /Metropolis/ in the Martin-Gropius-Bau in Berlin (1991). Since then her participations have included the /Venice Biennale, the Istanbul Biennial, Sculpture.Projects in Münster /and /Documenta11/. In this, her seventh solo show at Galerie Barbara Weiss, three continuing new works from the years 1997-2005 will be presented.

The /Film Lexicon of Sexual Practices/ takes an encyclopaedic approach, and was begun during the exhibition /May Day Film Media City/ in 1999 in the Portikus, Frankfurt am Main. It is now being continued for the first time for this show in the Galerie Barbara Weiss. The three-minute short films (colour, 16 mm, no sound, static camera) show sexual practices as close-ups. Three new films were made for the exhibition in the Galerie Barbara Weiss - visualizing the practices French kissing, love bite and ear licking with two actresses.

The radio play /Interviews/ with /Daniel Buren, Adrian Piper, Lawrence Weiner/ (2005) consists of the original interviews edited together. These interviews by Maria Eichhorn were made in the context of her exhibition /The Artist's Reserved Rights Transfer and Sale Agreement/ of Seth Siegelaub and Bob Projansky in the Salzburg Kunstverein (1998). The interviews thematize the significance and application of the "artist's agreement" and also issues concerning the sale and resale of works of art.