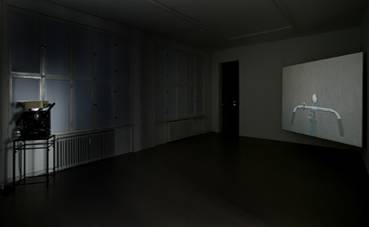 In her second solo exhibition at Galerie Barbara Weiss Marijke van Warmerdam is showing new works with a simple and open pictorial language that speaks directly to viewers and invites them to embark on a journey into an immaterial world.

The film /Met losse handen (Freewheeling),/ 2004, shows the front wheel and the handlebars of a bicycle being ridden along a straight country road whilst gradually increasing in speed. The viewer sees the scene from the perspective of the cyclist. The point of view slowly shifts from the road to the horizon, and the ride leads above the treetops to the sky, before the cycle regains firm ground and the journey begins anew.

In the same room an object is suspended that bears the same title as the exhibition: /Outward Journey/. Three bottles are placed on a wooden shelf before a mirrored wall. One of them is a ship in a bottle, whilst the others are unopened bottles of alcohol: Malibu Caribbean White Rum and Absinthe. The labels of these two bottles combined with the ship in a bottle produce a play on words and images, centred on the notion of a longing for exotic worlds.

The film /Roeren in de verte (Stirring in the Distance)/, 2004, shown in the gallery's back room, presents a room with a large window looking out onto snow falling. On the left margin of the picture there is a cup in which a hand is now and then stirring a spoon. The snow falls quickly, then more slowly, and the more the viewer beholds the falling snowflakes the more the gaze is captivated by the movement of the snow. Both of these films, Met losse handen and Roeren in de verte, run as loops. In this way Marijke van Warmerdam counters traditional expectations regarding plot and narrative in film - as in her previous work.

A number of objects and silkscreen prints are installed in the foyer. /There Are Superior Beings Here,/ 2005, is a natural square pyrite stone, installed on a black right-angled metal triangle. Marijke van Warmerdam shows us the stone's simple beauty, with its perfect form as a marvellous product of nature. This is Marijke van Warmerdam's answer to Sigmar Polke's work titled /Höhere Wesen befehlen: obere rechte Ecke schwarz malen (Superior Beings Command: paint upper right corner black),/ as van Warmerdam's work states that the superior beings have already completed their work. Opposite this piece we see the silkscreen print /Puddle,/ 2005, which is printed on a mirror. A hand is seen holding a branch that touches the centre of a puddle of water. The magic of this picture is intensified because the viewer is mirrored in the surface - in the water - and this effect increases the closer one moves towards the image. The second silkscreen /Take off,/ 2005, depicts two hands holding a mirror up to the sky, whilst both an airplane and the viewer are reflected in it. /First drop,/ 2004, is installed on the wall above the beholder's head and is reminiscent of a cloud. A large round transparent drop is about to fall from it.

These films, objects and silkscreens disrupt the continuity of time and place, and thus open up a totally different reality. Marijke van Warmerdam leads us to a borderline at which reality and daydream meet.