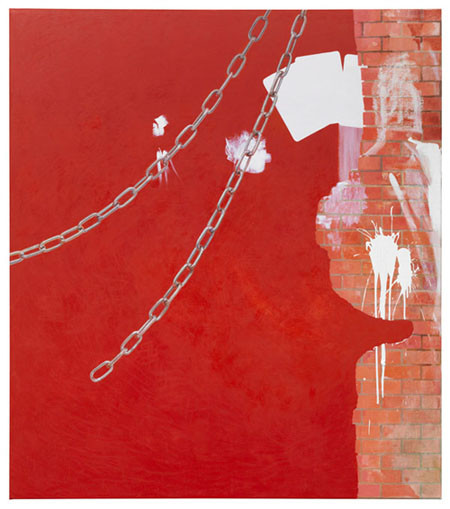 In all its heterogeneity and diversity, Monika Baer’s painterly works with each new exhibition manage to convey a sense of witnessing a long-term experiment beyond linear calculation that is highly relevant not only for all those interested in contemporary debates on painting. Today, Baer’s artistic negotiations between figuration and abstraction, between image and non-image, between evocations of narcissistic-identificatory modes of spectatorship and modes foreclosing identification, are fueling one of the rare artistic projects capable of drawing fresh, new impulses from the paradoxical notion of a “painterly critique of painting”.

In Monika Baer’s new paintings, the representational elements – brick wall, wall surface, chain, keyhole, as well as gestural, explicitly realistic white traces of painting, scratching and scraping as literal moments of figuration – dwell, as it were, by the side of a smugglers’ road across the border to abstraction. Immediately striking is a broadened variance of layers and surfaces, ranging from the massively pastose of the black paintings, the curiously feverish and seemingly thin, flouncy, wavy, gaping color skin of her flesh colored paintings, to those abrasions, craquelures, and „non-painterly“ retouches, actually intermingled with picture-constitutive ghost lines, in her cadmium red brick wall paintings. An exceptional position, highlighting the role of visuality, is taken by the (painted) keyholes and the (paint-embedded) mirrors which also function like holes, though in a different way. In addition to the haptic impulses inviting us to identify or disidentify ourselves with the skin-and-flesh qualities of the paintings, they also lure us into an optical scheme of positional exchange, in which the rear part of the paintings, the space behind them, as well as the pictorial ground are –very economically – brought to the viewer’s attention as autonomous constructs. Even in the face of the play with the bodily abject which comes across as clearly more than just coldly calculated here, the title of this exhibition, „The Return of the Rear,“ sends us off in diverging directions and thus need not be interpreted as a psychology-laden hint to a „return of the suppressed“ only – since the topological meaning of „rear“ seems to play the more significant role here. Crucial in these new works is the engagement with the space of viewer identification vis-à-vis the painted image. More than ever, they are now developed as analogies of a physical perception of self and body no longer primarily oriented on the model of panel painting, but on an expanded pictorial space. Gazing inward and outward „through“ the keyhole surgery executed on the now paradoxical „picture plane“ – actually looking from the viewpoint of the picture itself, which, in turn, gazes back at us – to see the body, the sky, the skin, we find that the mirrors on one of the grey paintings are arranged in such a way that we can easily see them, while it takes quite some twist to see ourselves inside them.