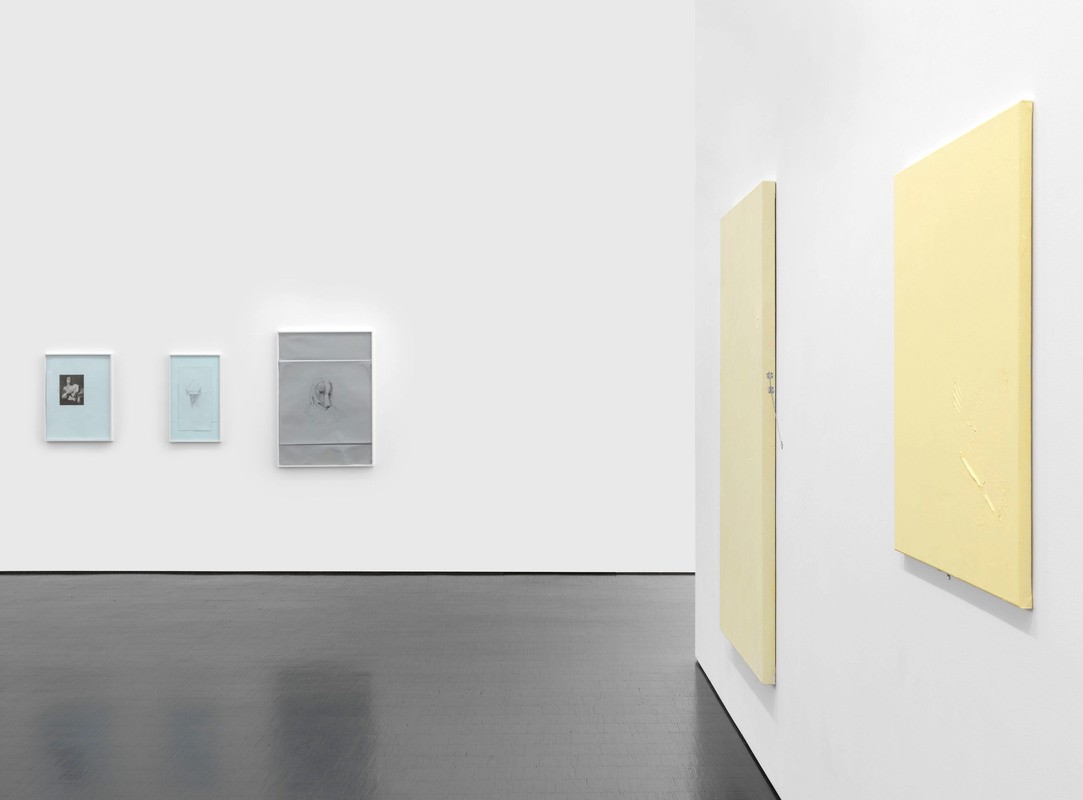 Galerie Barbara Weiss is delighted to announce Monika Baer’s sixth solo exhibition, Die Einholung. Baer presents an ensemble consisting of three parts in which she further develops her engagement with the history and possibility of painting. A group of yellow pictures and a series of large-scale pigment paintings form a constellation that intensifies the confrontation of different painterly idioms characteristic of Baer’s work.

The works involving a yellow painting and a filigree metal device mark a new step in Baer’s painterly investigations. The yellow tone as well as the scale vary in each painting. In several works, furrows and traces literally fan out the picture plane, letting the paint materialize into discreet reliefs. The mounting elements, individually made of polished aluminium for each painting, are screwed directly into the wall. The object-like, narrative motif, which in earlier works fractured the reference of the monochrome, has been removed from the now empty picture plane and fixed at the side of the canvas. The demands made of panel painting as a commodity – mobility and availability – are confronted with a moment of resistance that appears absurd in its utter ineffectiveness.

In the large-scale pictures, painting takes place as a metamorphotic process of dissolution and densification. A mirror is inserted into painterly clouds based on the watery application of metal and stone pigments, while singular drops appear as reliefs on the canvas. In this game of aggregate states, relations are reversed, as the ephemeral nature of water becomes the actual material densification within the picture. The drops are three-dimensional objects that have been applied to the canvas like stuccowork. Their form is reminiscent of earlier elements in Baer’s work, of those coins, breasts and slices of sausage that already sketched a painterly morphology of the circular shape.

Whereas Baer’s relation to painting and the image is always negotiated and questioned as a productively problematic one, she employs drawing in a direct way. Therefore, the works on paper stand in a certain distance from the paintings. But instead of providing narrative clues, they confront the scenic character of the large paintings and the décor of the yellow canvases with their own theatric lure.

As in Monika Baer’s former work, Die Einholung puts the engagement with the image to a test, performing as well as extending the relation. With their formal language and compositional principles, the works on view connect with earlier series of the artist such as the alcohol paintings (2013-2015) and the monochrome works with key hole motifs from 2009. Yet they map out an entirely new constellation. The decorative reliefs on the canvas of the yellow pictures are precisely added traces, in which the gestural is conspicuous only as a phantom. Institutional conventions such as theft protection become a narrative moment that undermines the abstract composition, and drops materialize as wall decoration. Whereas in the earlier works the relation between figuration and abstraction, illusionism and literality was also decisive, now painting’s possible relation to its other and outside – the wall itself, the notion of decor, and the economic systems in which the works circulate – is thematized in a more direct and even brutal way. Yet, doing so, Baer does not address her themes by determining them, but rather through the movement that the different elements are made to undergo in her paintings.
www.galeriebarbaraweiss.de