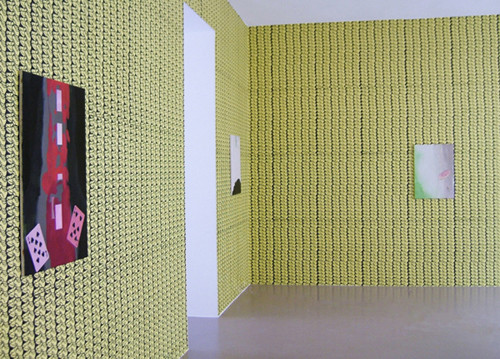 Streets connect people and places, facilitating mobility and transport, but also causing noise and pollution. This experimental exhibition project Monika Baer Thomas Bayrle at Galerie Barbara Weiss takes the motif of the street, with all its many associations, as a central theme and also as a concrete link between the works of the two gallery artists, who are exhibiting together for the first time. The central gallery space is turned into a (P)Op-Art-Salon and also into an intersection or junction. Here works by Baer and Bayrle are directly juxtaposed. Bayrle’s wallpaper shows thousands of pairs of identical black men’s shoes next to and above each other in a regular grid pattern against a bright yellow background – creating an iridescent glow that permeates the whole room. On top of the serial pop structure of these shoes Monika Baer has “parked” several small and medium-sized paintings and drawings at irregular intervals. From the two adjacent rooms the sound of cars racing and the rattle of a film projector can be heard. Bayrle’s video Motorway Intersection (co-production with Daniel Kohl) and the 16mm film Rubber Tree are being projected here.

The new paintings and works on paper by Documenta 12 artist Monika Baer employ various methods and languages to explore the motifs of the street and money, reflecting on a link between these two promising and intriguing concepts. Baer again works with the realistic and at the same time heightened and slightly ironic style of her earlier work, presenting here a number of images of banknotes (mainly 10 or 50 euro notes), coins, or slices of sausage before an undefined and often unappetising green-brown background, where these objects seem to be suspended or to be falling into the depths. The cartoon-like scenes also presented here are new to Baer’s work; in them money (small change) plays a key role. The picture entitled Street is also particularly remarkable – the viewer looks onto a section of a street from above through layers of excrement-like paint onto which coins have been stuck, while the street itself is red with a pink lane down the middle. This rather vulgar image is reminiscent of the sober and sexually laden pictures by the American artist Lee Lozano (1930-1999). Monika Baer’s collages of paper also address the same themes. Here she has assembled newspaper cuttings on a greyish and watery ink background, and on paper that has been sprinkled with dots of paint. The artist addresses the phenomenon of the automatic telling machine – anyone who has an account with funds can pass a hole in the wall and access banknotes as if from an invisible source. Monika Baer is not concerned with a critique of the temptations and irresponsibility of consumer society, but rather wishes to observe – and penetrate - the fetishised surfaces of money.

“I never say ‘good motorway’ or ‘bad motorway,’ it’s always both at the same time. I am both enthusiastic and critical at the same place, or enormous and miniscule at the same time.” This statement by Thomas Bayrle from the year 2002 is a good summary of his position. Bayrle has received many awards for his work, in which he has been developing his own German version of Pop Art since the 1960s. He dissects phenomena from mass society into pixels, cells or dots, thereby addressing issues such as “mass,” mass production, mass media and mass mobility. He interprets the motorway as a metaphor for the functioning of “the whole system with its droning and repetitive litanies of jobs, environmental issues, motorway construction, insurance, car theft.” In addition to Bayrle’s shoe wallpaper of 1967 the gallery is also showing a film and a video by the artist in separate rooms. The black-and-white motion pictures of the 16mm film Rubber Tree of 1993 show a moving perspective on a rubber tree that is revolving around its own axis. Its “multi-story” leaf structure becomes a kind of architecture, on which, like insects, a group of pedestrians is seen to be walking to and fro. This is a low-tech production, for which the artist placed thousands of photocopies side by side and animated them. We are also showing the new video Motorway Intersection (co-production with Daniel Kohl). Here, the form of the crucifix, which Thomas Bayrle has used in previous works, has been divided into a grid of about four hundred polygons, which are filled with various digital image sequences showing moving cars. The background is a matrix with thousands of rectangles filled with small digital images. The camera moves slowly from left to right over the body of the crucified man, who seems to be brought to life by the movement of the cars, while all the time the monotonous sound of car engines is heard. He becomes the motorway: motorway intersection – a nightmare or reality, traffic as an ersatz religion – the victim of an accident as the martyr to traffic?