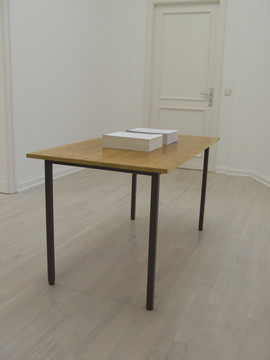 These sentences form a part of the work, Good Looking Out (2008) by Dave McKenzie (* 1977, Kingston, Jamaica, lives in Brooklyn, New York). Densely packed, nearly unreadable aluminum letters build to form a text that hangs on old discarded television antennas. They are fragments of a conversation, McKenzie had with a stranger at a bus stop. This stranger was drunk and rambling but he somehow managed in a short amount of time to convey to me his ideas about what it means to be living in America. Good Looking Out is my memory and understanding of that encounter.

Good Looking Out is the center piece of the exhibition entitled Citizen and it directs us to McKenzie’s main subjects that are best circumscribed by questions: What does it actually mean to be a citizen, what is the meaning of nationality, a status one is born into or one that can be obtained by following certain procedures of naturalization, how does it feel to exist in grey areas as many people do who have no papers and no official citizenship?

McKenzie does not lecture on these topics. Instead he takes his own experiences as a starting point for his works. So, for example, the experiences within his own process of naturalization act as a center for creating, Politics is the Art of Compromise (2008). He comments:
I became a U.S. citizen sometime during the Bush presidency. I was born in Jamaica but had spent the vast majority of my life in America. Although I have always thought of myself as more American than Jamaican I think I became a citizen mostly out of post 9/11 fear. At the end of the citizenship or naturalization process I received a Welcome to America letter. I thought the letter was strangely terrifying. Within that short letter I felt that there was a real political agenda being advanced. I then decided to review the letter that naturalized citizens would have received under the Clinton administration. The Clinton letter was much more laissez-faire. I then decided to combine the two letters into one letter by keeping all the words that they shared in common as a way to make a third text.

Within the exhibition this third text is shown as two piles of paper on a desk, each letter is signed by George W. Bush and by Bill Clinton, but the text itself consists basically of fillers. The Welcome to America letter is worked out depending on the political atmosphere and the differences between the basic definitions remain to be imagined by the reader.

Open Letters (2004) is another text work, two letters to unknown drivers from opposite sides of a similar situation.
While crossing the street one afternoon, I was almost hit by a car that was making a right hand turn. This is one of those common and shared experiences that so many of us have, but I began to obsess about the driver and the fact that he or she may never know how they affected me. That ignorance combined with the fact that I had the right of way (I suppose this allowed me to claim some moral superiority) turned into a desire to act. Without knowing the form, I had resolved to try and make a work out of the experience.
About an hour or so later, though, another routine event occurred. I jay walked in front of an oncoming vehicle. Because of the earlier incident, and my desire to make a work out of it, I was able to assess my current action in a way that I hadn’t before. Instead of making a work that only dealt with indignation, I made a work that spoke to both indignation and regret.

For McKenzie artworks are often an instrument of communication, of the filling of voids and of interaction, and two works in the exhibition speak directly to this. With the painting Proposal (acrylic on linen, 2007) he proposes for example to meet with him once a year until one cannot or will not. While in the video We Shall Overcome (2004) McKenzie adopts Bill Clinton’s role. The former President had moved his offices to Harlem but was rarely seen there. McKenzie uses that absence as a starting point to don a costume head of Clinton and walk through the streets of Harlem talking with passersby.

In his film Present Tense (2007) McKenzie reflects on his own work and at the same time reflects on larger questions that concern the progress of mankind. The film does not give a definite position nor does it deal with beliefs or solutions, but in its fragmentation it suggests starting points for conversations on being together, illness and death, evolution, television, Warhol, sense and nonsense — of all this.
www.barbarawien.de