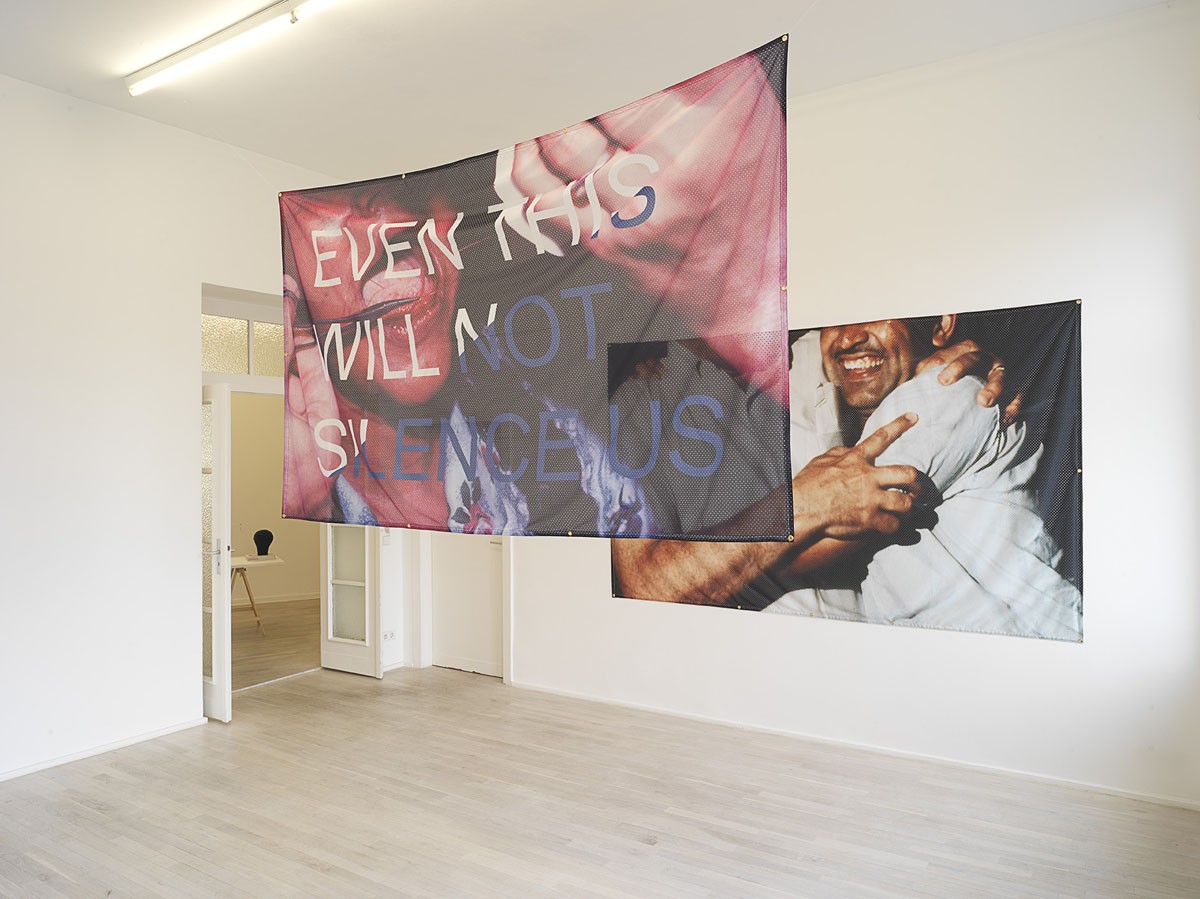 Conversation with Dave McKenzie about the exhibition

For your third exhibition at Barbara Wien you are presenting new works. Some are a continuation of An Intermission, a series of knitted banners printed with various kind of pictures, accompanied or overlaid sometimes with text. For example “We Will Not” is written on a picture of a bottle that contains "natural vitamins" or under a cropped portrait of a businessman is written “Speeches”. The sources, contexts and meanings of the images are often ambiguous; they resist an easy and quick reading from the viewer. Moreover, you frequently heavily edit your images by cropping them. Could you tell us more about their sources, and how do you select them?

The images come from a collection of 35mm slides, containing travel, family portraits and other photos’ genres that I acquired from Ebay some years ago.
It belonged to a private person who traveled a lot.
I have worked with these images at different times and in different contexts but I have so many of them that I have never looked at all them. When I start a new project I will go through some portion of the archive and try to select a few images that suggest something outside of the literalness of the image. Often, this exercise has nothing to do with the intentions of the original photographer or the subjects that were depicted. In altering them I am also trying to refresh them, make them potently ambiguous, and push them towards a potential future use. When I settle on an image, it is usually because I think it speaks to something that feels current and urgent - in this way it is a little like laying out a newspaper or magazine spread.

Banners bear a strong symbolic quality inherited from a long tradition of use (religious, advertisement, protest, politics, etc.). For demonstrations and parades, banners are truly performative objects as they materialize a statement, make it visible and impose its presence in a given space. Could you tell us more about this material choice? Are you somehow quoting a specific realm where banners are usually used such as for advertisements or demonstrations?
Could these banners be used as props for performances?
I often work with forms that are recognizable at first glance and the banners definitely fit into that category, but they aren’t from any particular realm or tradition.
I think they are probably a mash-up of all the traditions that you mentioned. Mostly, I like to think of them as stages for potential actions - real or imagined.

Banners are objects of communication, turning language into something visual. However, in earlier pieces you have been working with the impossibility or difficulty of speaking and not being understood (Babel, 2000), of addressing the other (encounter with Henry Kissinger in Camera, 2012), and you also made several mute replicas of yourself (Self-Portrait Piñata, 2002). How do you see your exhibition Speeches Speeches Speeches in this context?
Recently, Oprah Winfrey gave a really powerful speech at the Golden Globes, and the reaction to the speech largely dealt with whether or not she would run for President. The actual substance of her speech was placed in the background of what was imagined to be her ambition. I think about that and the difficulty of being heard, understood, and felt. The banners try to make something out of this difficult space; I care less whether I am understood and more about what you think you heard. To me that is a nice place to begin.

The texts printed on your banners show an interesting format, I have the impression you mimic or even pastiche the writing style one can witness on generic banners. Either used to display advertising or political slogan, these are often rather brief, catchy sentences with an almost invariable use of these subject pronouns: you, us and they.
Whom are you addressing? Who is “us” as opposed to “them”?
Address is often a really important part of my work, which is why so much of the work takes the form of a letter. With a letter you generally know who it is from and who the intended recipient is. The banners do this a little differently but I hope that around them temporary communities can occasionally form. So, in the end you feel as if you are the speaker or addressee.

In the exhibition, you also show sculpture-tables with doll heads and other objects. These doll heads are faceless or speechless, so to speak. Could you tell us more about it?
The heads are more abstract than the banners in general. They are a surrogate for all sorts of associations and actions. In many ways I think they feel like characters in a play without a script. In fact when I work on the heads I feel like I am writing a text that I can’t always read and in this way I am depending on a deeper richer language of associations and even misunderstandings.

McKenzie is currently taking part in “Stories of Almost Everyone”, Hammer Museum, Los Angeles, USA until May 6, 2018.
www.barbarawien.de