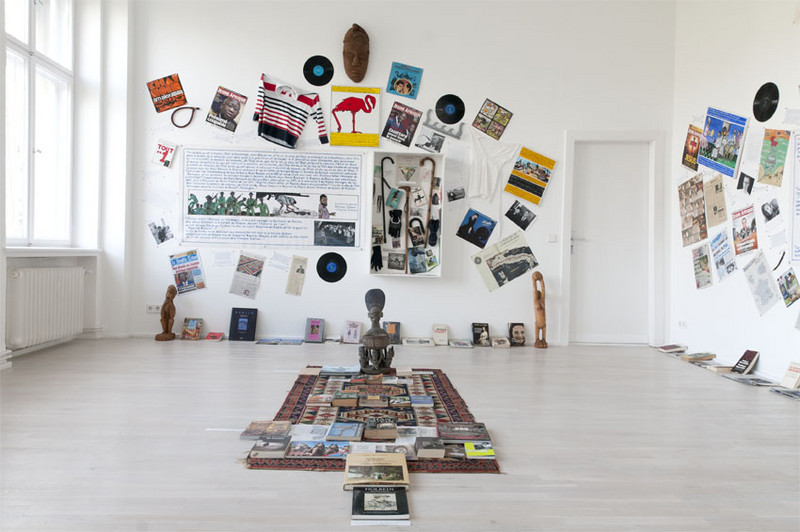 The theme of the exhibition by Georges Adéagbo (* 1942 Cotonou, Benin) is: "Les artistes et l‘écriture"..! – Artists and Writing.

As always, Adéagbo refers directly to the place in which he works and exhibits – and the time period in which the installation comes into being. First it is his life and his daily routine in Cotonou, Benin, where he lives. There he begins to develop a chosen theme – he writes texts, he commissions paintings, he collects African wooden figures, newspaper clippings and found objects he has picked up from the beach and the city. In his yard he begins to line up the objects into a chain of associations. His own texts and selected images from books are painted by the sign painter “Esprit petit frère” on canvases or plastic tarps – and through that, Adéagbo develops a completely unique African form of conceptual art. He then sends all of the collected materials to the gallery or museum in which he has been invited.
At the same time, he examines the place where he will be exhibited – in this case, Berlin. Like an ethnologist, he considers the living conditions and habits of the place where the Other has been established. He collects records, books, clothes, shoes, curiosities from the Berlin flea markets – or, in other words, the trash and the remains of Berliners. Relics from the GDR, another vanished culture, which are found at the flea markets, are woven through the entire ensemble – i.e. records from Therese Giehse or Bertolt Brecht. Alongside are the remnants of Western culture – records from Mireille Mathieu, or German pop heroes like Roland Kaiser – next to the so-called high culture.
All the materials are arranged in room-filling installations and cover the walls and floors. The formal and intellectual chains create a non-hierarchical arrangement of objects: high and low / African and Western culture / kitsch and philosophy – everything exists simultaneously.
Other themes in this chain of associations include the political indoctrination and the latent and open racism in the media, the politics of apartheid, the history of the independence of African countries, the systematization of the writing of history and the world of philosophy, as well as being an artist, writing and learning, the connection between education and power. Adéagbo intensively explores his identity as an African artist and writer in the form of political questions regarding Africa’s postcolonial development and the history of religiously-motivated wars.

Adeagbo’s writing is characterized by a literary-essay form. It is aphoristic, sometimes erratic and always repetitive. Ideas are carried out through variations and repetitions, reminding one of Gertrude Stein’s method. The texts have no didactic function, they pose questions, discuss problems through parables and provide, if at all, riddled answers.

For the exhibition we have translated Adéagbo’s written texts from French into German and English. And, like everything that comes into being during the development of the exhibition, these translations have also become a part of the wall installations. Furthermore, the daily routine and the history of the gallery and bookshop appear in the work “Les artistes et l’ecriture”..!

Georges Adéagbo was born in 1942 in Cotonou (Benin). He lives and works in Cotonou and Hamburg.
After studying law in Abidjan (Ivory Coast) and Rouen (France), Adéagbo returned to Benin at the end of the 60s. Before he was accidentally discovered by the curator Jean-Michel Rousset in 1993, he made daily complex installations in his yard without calling himself an artist. In 1994 he was invited to his first exhibition "La Route de l‘art sur la Route des esclaves" in Besançon. From then on he has created his site-specific installations with a team of craftsmen in Benin. In 1999 he participated in the Venice Biennale and was the first artist from Africa to be given the prize of the jury for his installation at the Campo Arsenale. Since at least 2002, when he presented an In-Situ-Installation as part of the documenta 11 curated by Okwui Enwezor in Kassel, Adéagbo has become one of the most renowned artists of Africa. Later on the work from Kassel (in modified form) became part of the collection of the Museum Ludwig in Cologne. His works can be found in major collections, i.e. Philadelphia Museum of Art; Toyota City Museum; Museum Ludwig, Cologne; MUSAC, León; KIASMA, Helsinki, etc.