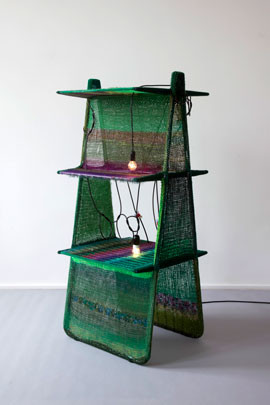 A wallpaper pattern with red flowers on green and pink surface – the atmosphere of a living room ensemble was part of the exhibition Late Last Night... by Jimmie Durham, which ended recently. Haegue Yang (* 1971) takes over this ensemble by Durham in her current show Closures, since she is concerned with the notion of private space. For Haegue Yang private space (home, household, family) equals political space. There we incubate the ideas of community: not only we practice conventional rules at home, but there we also can resist against them. What Haegue Yang interests is the shared space between the private and the public: ... the private space should be considered a place of complexity, where the self is cared for and contemplated and can be shared in a different way.

How people live together, what human beings are able to think, what we consider as possible or impossible – all this functions according to arrangements, also describable as closures, as costumes of contents, sometimes also imagined contents, even valid for nothingness. The complexity of those is described by the exhibition title Closures. Haegue Yang presents herefore three new groups of works, sculptures, photographs and paper works: Non-Indépliables, Imperfections and Trustworthies.

Non-Indépliables (2006-2009/10) are drying racks, some are covered with fabric, some are knitted in yarn. The french title means Non-Unfoldables. The title alludes to the fact that the unfolded but wrapped drying racks embrace innumerable imagined foldings. Furthermore, the Non-Indépliables appear like human forms. Those closures resemble skin over a body. For a short moment the abstract form of the sculpture reminds of a human figure but then disbands again. The reading of them as something familiar or something unknown changes permanently.

Playfullness of the anthropomorphic imagery, a methodology which allows narratives in abstract form vocabulary, is one of the fundaments of the second work group titled Imperfections (2010). In a series of color photographs Haegue Yang shows images of geometric Origami objects – all in different state of destruction. Some of them are crushed, others have dents. The expected perfection is not fulfilled. Damaged Origamis lose their geometric neutrality and becomes narrative. Titles like wie Baffled Rolling Head, Vicious Laughter or Laurel and Hardy on Fire suggest a possible reading.

Next to the Non-Indépliables and the Imperfections Haegue Yang shows another work about closures, called Trustworthies, collages made of papers with envelope security patterns. The variety of the camouflage patterns which cover the content of a letter is astonishing. The abundance visualizes the obvious necessity of closures. Trustworthy Waves I and II consists of envelopes, torn in strips. The stripes enable an own narration of the image – the wave.

In the Trustworthies, a recurrent theme in the works of Haegue is brought up – it is the view on industrial products, standards and leftovers like bulb packages. She is contemplating every day objects and unfolds them in all possible forms of appearance. Often, the familiar thing gets so strange that you pose the question: what is it?
Like under a magnifying glass Haegue Yang looks also into the flourishing industry of containers, such as bowls, glasses etc. In her new edition Can Cosies she enwraps cans with peeled tomatoes or other food in knitted yarn.
www.barbarawien.de