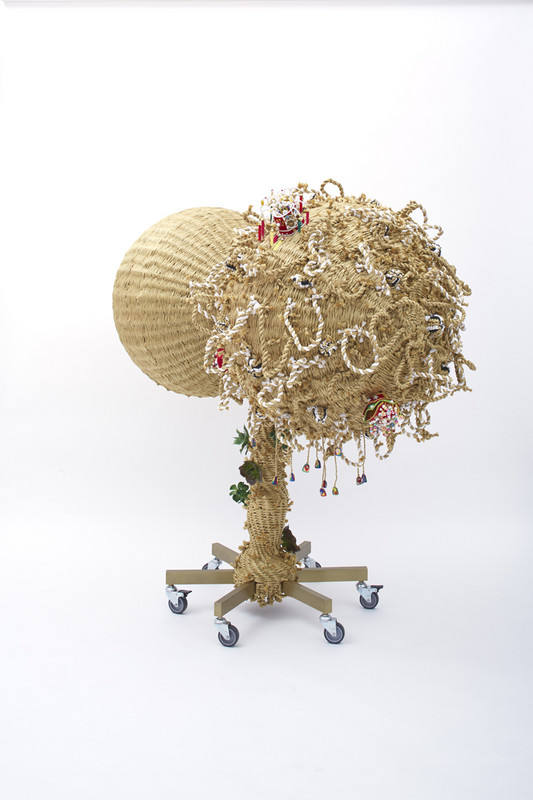 The central motif of the exhibition comes from Victor Hugo’s novel The Man Who Laughs, first published in 1869 and written while the author was voluntarily exiled on the Channel Islands, England, due to his support for republicanism. Displaced from his native France, Hugo criticizes the construction of the class system while depicting vividly the allegorical figures with powerfully charged symbolic characters. For example, Gwynplaine, the protagonist, transgresses class boundaries through his physical deformation in which he is destined to wear a permanent laughter carved on his face. Such a ‘mask’ makes him an extraordinary being, a monster and outsider of society, who is not only disqualified from belonging to the aristocracy, but also to the people. This tragic and condemned figure builds a contrasting as well as compelling relationship with Dea (goddess), a beautiful blind girl, the only one who ‘sees’ the truthful face of Gwynplaine, alongside other fascinating figures such as Ursus (literally bear, in fact a wandering medicine seller) and his companion Homo (literally human, actually a wolf).

Produced during Yang’s residency at Glasgow Sculpture Studios, Glasgow Tales of Laugh (2013) is the central piece in the exhibition, located in the room facing south. The work consists of ten panels of scrap MDF, which brings together a number of complex contents: the quotations from the book, black and white photography, plaster objects and title letters made of 3D printing. It narrates the events of ‘outsiders’ in a society shaped by class distinctions, combined with Yang’s photographs of the Botanic Gardens and the Glasgow Necropolis with plaster objects. Each panel is dedicated either to a figure, a notion or an event from Hugo’s novel, yet our associations are not bound by the narrative of the book as the configuration of locations, histories and materials expand a contemporary contemplation on the original reference, creating further resonances.

During her residency in Glasgow, Yang explored different types of cultivated spaces, namely the Botanic Gardens and the Necropolis. Yang idiosyncratically categorized the photographs of both places as either ‘civilized’ or ‘wild’, juggling the ambivalence towards the definition of these notions, testing a strange balance between the two. The Botanic Gardens were developed as a wild, exotic and extraordinary plantation, making accessible to citizens what used to be enjoyed only by the royalty and aristocracy. Necropolis is a cemetery named after the ancient Greek word meaning the city of death, and is located close to the Cathedral, a religious place as well as a center of human settlement in the past. Tamed places such as the Botanic Gardens are charged with the idea of wildness, while a Necropolis paradoxically incubates the idea of the mortal and secular in a particular and proximate order in a city. These imageries of man-made wild and civil places are married to the quotes from The Man Who Laughs. However, the final panel completely deviates in terms of its material and composition. Here, Yang places handwritten Post-it notes about her humiliating experience of racial harassment by an employee at the Glasgow International Airport, a temporary and transitory site of equality, yet also violent and wild, evoking feelings of complete vulnerability.

Yang’s artistic ambition in Temporary Permanent is to experiment with different methods of sculpture making, drawing from whilst also transcending literary references. Presented in the exhibition room North, Sonic Laugh – Gwynplaine, Sonic Dance – Ursus and Homo and Sonic Blindness – Dea (2015) adopt similar approaches towards the main figures from the novel. Sonic Laugh – Gwynplaine is candidly rendered into a deformed sphere, with the copper and nickel plated bells stitched together and transpierced by metal sticks adorned with glittering bell chains. Sonic Dance – Ursus and Homo alludes to the bear skin-wearing vagabond who travels with his wolf called Homo and saves Gwynplaine and Dea from their childhood agony by adopting them. This figure is presented following the style of the Sonic Dance (2013-) series. Together with Dea, in the form of a hanging concave oval (shaped after Korean traditional spoons) covered with mute bells, their uncanny beauty reflects the tragic destiny of the substitute family that they built upon reciprocal appreciation and love, surpassing the antagonism between notions of the human, monster and nature.

Entering the exhibition, one faces The Intermediate – Pair Incarnate, Gwynplaine and Ursus (2015) in the foyer of the gallery. The Intermediates (2015), a new work cycle introducing straw as material in Yang’s oeuvre, focuses on the universality of the material and its craft. It examines the notion of folk, while opposing the conventional and insular notion of ‘us’ by referring to ethnic art, regional craftsmanship and hybrid strands simultaneously. By using artificial straw, Haegue Yang appropriates the idea of origin and tradition, humorously escaping the framework of nation/state to venture into a realm of hybrid culture that transcends similarity and difference. The artificial representation of nature as focus has been apparent in some earlier works like Warrior Believer Lover (2011), where the artist used plastic plants to represent nature in an industrial light.

Empowered by the anthropologically significant meaning of bells, Sonic Sculptures build another resonance in this show, opening up the world of archaic myths beyond the determinism of modern times. Mounted on the wall of the exhibition room facing North, Sonic Rotating Geometries (since 2013) are sculptures that can be rotated by hand. Once the sculpture is set in motion, the quadrangular, pentagonal and hexagonal shapes begin to appear circular by way of an optical illusion, accompanied by the rattling sound of bells. Through the states of suspension and rotation, a visual effect of color blending occurs as the painted background of red and the color of the bells are amalgamated. The phenomenological interaction generated by the physical movement  of the work, its momentary shape, the sound of the bells tinkling, the optical illusion and the blending of colors lead the viewers to imagine a heightened possibility where ordinary objects tremble and individual entities reverberate.

Through this movement of bells, Yang’s work allusively suggests the work of sound as the beginning force that opens up the world (as is narrated in many ancient myths). Yang’s work seems to tenaciously exhaust the mechanical determinism of modern natural science or desperately cast a spell for the creation of a new order.

In 2015, Yang’s major survey show, Shooting the Elephant 象 Thinking the Elephant (until May 10) opened at Leeum, Samsung Museum of Art, Seoul. She is participating in Sharjah Biennale 12 (until June 5, 2015) with a new commissioned work of an outdoor installation, titled An Opaque Wind. After her residency at Atelier Calder (Saché, France) this summer, another solo show is scheduled in October 2015 at UCCA Beijing as her first major exposure in China.
www.barbarawien.de