how to write II 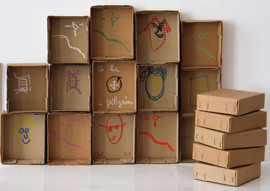 how to write II is the second part of our series of exhibitions about the matter artists who write. With this series we celebrate the 25th anniversary of the gallery and bookshop Wien Lukatsch.

For how to write II we invited four artists, who are dealing in several ways with the perception of perception. Their works are laying the focus on the process.

Robert Filliou (1926 – 1987) developed – he was a trained economist and an artist influenced by Buddhism – the principle of the permanent creativity. His action pieces and objects, which he often realizes in collaborations, f.e. with artists like George Brecht and architects like Joachim Pfeufer, emphasize the activation of the viewer.
Filliou: Work as play, is something I present at times to give an idea of a certain approach to creativity that i would like to make available to everyone. Work as play, art as thought, thought in the sense of a growing and learning process. But even more thought in the sense of entertaining moments, I'm a thought-entertainer.
We show several objects by Filliou from the 70ies, in which he thinks about, uses and changes the chinese sign for Tao, his invented République Geniale and the literate form of haiku.

Nina Canell (* 1979) is interested in physical phenomenons and often visualizes things, which are actually invisible: electricity, heat, cold, air – and she works with elements like water in different aggregate states. In her installtions and sculptures one is confrontated with events and results, which are on the first glance unclear, strange and vexing.
Halfway Between Opposite Ends (studio) is a new installation in which Nina Canell shows all the materials – like in her studio – she needs to burn tracks in small wooden sticks with 4000 volt. She shows those sticks individually since 2010 in here series Halfway Between Opposite Ends. In the studio version she introduces the process and her working method.

Mariana Castillo Deball (* 1975), one of the four nominated artists for the Nationalgaleriepreis für junge Kunst 2013 in Berlin, shows her film Blackboxing (2005). In which she is dealing with scientific theoretical questions on the Black Box. In collage-like sequences and a text Mariana Castillo Deball associates about questions on the openess and closeness of systems. Deball: I am interested in devices, individuals and events, which evade the blackboxing effect: unfinished stories, ambiguous characters, incomplete objects and so on. Usually, they belong to a process from which they were finally excluded, or their interests and links belong to different categories, so it is impossible to fix them in a specific place. These fragmented pieces of imaginary machinery lead to chain reactions, as if the fragments might be trying to find a connection, a tiny place to settle for a while.

Andreas Sell (* 1977), whom we invited for how to write II for the first time, presents his 17-parted installation Guideline to eat a slice of toast within eight bites (2013). Machines, often kitchen equipment, are more or less rebuild in clay and spread on the floor. The objects are partly modified, sometimes until they are inoperable absurd. The text, which belongs to the work is audible and comes from a small mirror house. A Japanese girl explains in almost twenty minutes meticulously how to eat a slice of toast within eight bites. The process of eating is stretched so much that the most daily action, like chewing becomes impossible. Sell uses the effect of slow motion to turn instructions ad absurdum. Another example of his practise of thinking about and playing with instructions is: He stands still for hours and proves via time exposure that standing still is impossible.
www.barbarawien.de