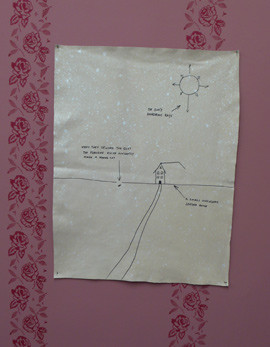 In his book Between the Furniture and the Building Jimmie Durham describes himself as a ’theoretical biologist’, a person who depicts the behaviors and norms of cohabitation in various communities. But as an artist and writer he looks skeptically at the norms of language and so he developes besides his essayistic and literary texts a visual language in sculptures, assemblages and drawings. There he speaks about cultural behaviors as well as his own position towards the rules of society. The result is a reflection, which is aware of the own involvement. In heyoka magazine he gave an interview in which this attitude is wonderfully described: I try to make art that's not connected to metaphor, that hasn't this descriptive, metaphorical, architectural weight to it. But I think my tendency, and most artists' tendency - most artists that I know, especially, in the last 20 years - is to make instructive art, art that instructs us about something, or to make sublime art - art that says, ‚I'm the sensitive person, I'm your guide and you could never have seen this without me, the sensitive artist showing it to you’. I think those are the two sins we now have in art, I feel that for myself.

Deconstruction, self-criticism, humor and wit is significant for the works of Jimmie Durham. In his third solo exhibition in our gallery he shows the installation Late Last Night (Ate Las Nigh) (At La Nit) (A A I!). He changes the gallery space into a living room ensemble, complete with carpet, curtains and wallpaper painting. In this bourgeois home décor, which reminds us of films of Jean Cocteau, he presents drawings and text pictures. The gallery space becomes a kind of a filmic scene were absurde pictures and sentences are crossing each other like in a dream. Durham writes: the over-all look of the show is not especially unusual, i think, except for the gallery itself. the works try to be only a little different from the ordinary. if one attempted to see an over-all theme or narrative it would be dream-like, i think; with melancholy and un-heimlich but humourous jumps from one sentence to another.

Jimmie Durham who currently takes part in the International Festival of Visal Arts in Glasgow produced the works for our exhibition during his residency at Glasgow Sculpture Studios.