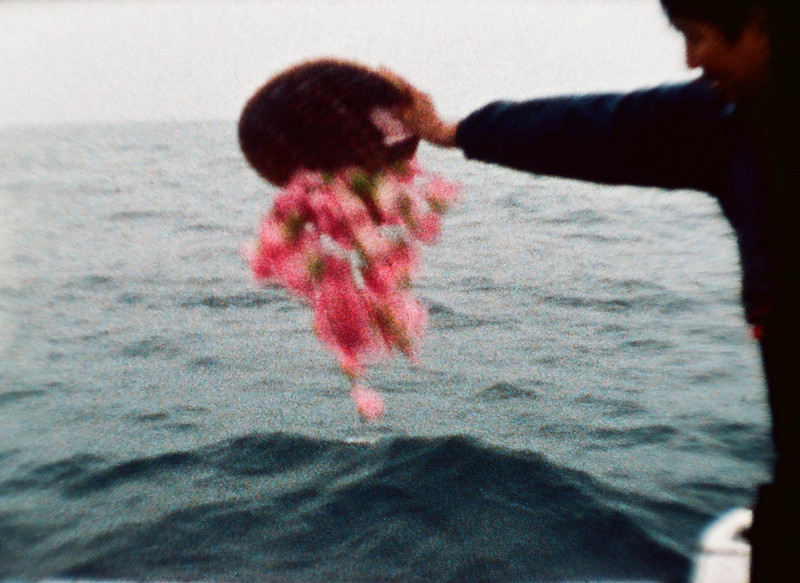 "One day, I saw a red flower floating in the waves at the coast. Will this flower drift away from here to some far place? I wondered. And I thought of the day when these flowers, long ago, drifted here from the continent across the sea. Where will they go, the flowers I cast into the sea? Will they eventually arrive somewhere?"
With these words the Japanese artist Shimabuku commented his film Sea and Flowers (2013) in his new catalogue of works from Noto (Japan). In Sea and Flowers he pours a basket of bright pink petals into the sea. The film, without sound and commentary, only shows the movement of the leaves on the water as they disappear further and further.
Experiences with nature, animals, eating habits, forms of behavior, the details of daily life and the cultural techniques in different areas of life and societies in which Shimabuku lives and travels, are the subject of his art. All works by Shimabuku originate in the exact observing and interacting, they are a mixture of respect and curiosity for the new and strange. So he learned site-specific techniques and crafts and used some results for his exhibition Noto, for example, the production of iron, building of special racks for drying fruits and manufacturing wind catchers of bamboo on the road. The products and manufacturing techniques were part of his exhibition at the prestigious 21st Century Museum of Contemporary Art, Kanazawa in 2013.

In his first solo exhibition in our gallery Shimabuku shows, next to the movie Sea and Flowers, the installation Something that Floats / Something that Sinks (2010), which illustrates that fruits or vegetables of the same kind partly sink, partly float when placed in water.
Photograph wearing rain boots (2013) shows a photograph from the Okinawa sea, the area where his family comes from. It is mounted on a simple wooden plate and stands on rubber boots.
The installation A Great Day (2011), which consists of many different objects and a film, is documenting an experience of Shimabuku in Moscow: "One day on the street of Moscow, I had kept watching a street seller who sold nothing for long time. Many people passed by in front of him, but nobody stopped there. I started to think how much he can sell in one day. I wondered if ever there will come the day when he sells everything. After a while, I decided to buy everything from such seller on the street."
Shimabuku bought the entire offer from the street trader and shows it as a sculpture in the gallery.

Shimabuku (* 1969 in Kobe, Japan) lives and works in Berlin.
His last major solo exhibition in Europe was in 2014 at the Kunsthalle Bern.
In the fall of 2014 Shimabuku will take part in the Taipei Biennale curated by Nicolas Bourriaud, with the title: The Great Acceleration, Art and Its New Ecosystem: A Global Set of Relations.
www.barbarawien.de