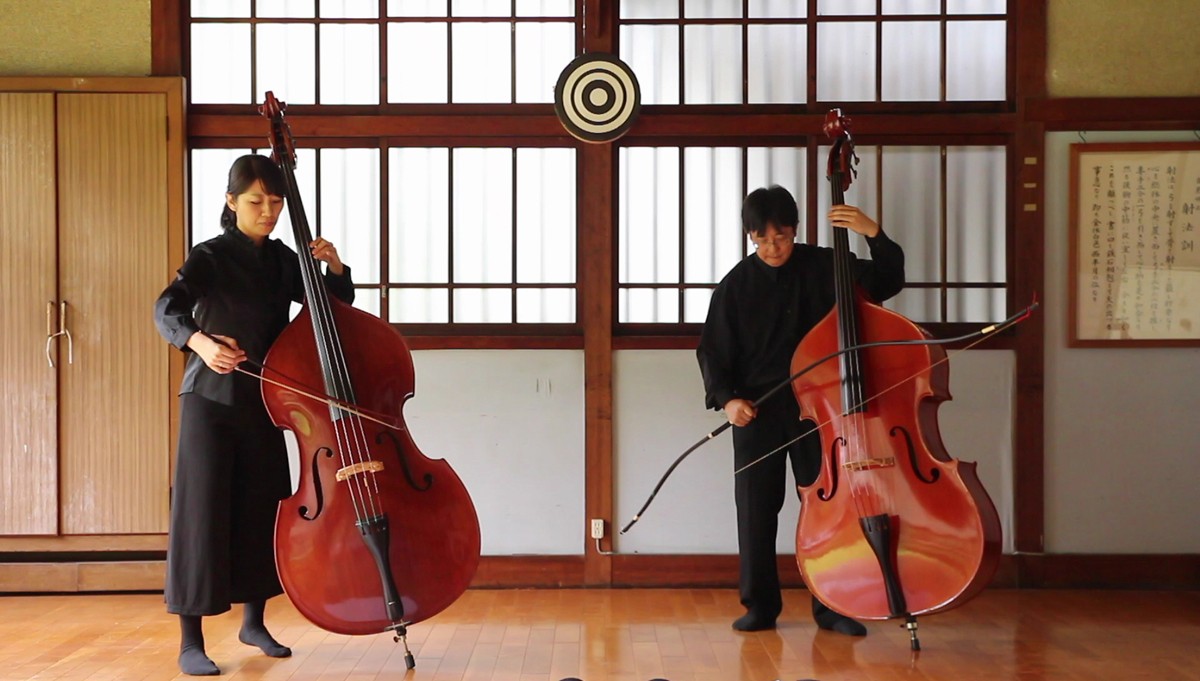 One day, when the wars ended, people began to make music by plucking the strings of the bows they once used as weapons, or by rubbing the bowstrings together.
On this day, weapons became instruments. I wonder, what kind of sounds were made in that moment?
Shimabuku

For his second solo exhibition at Galerie Barbara Wien, Shimabuku presents his last film Bow to Bow, commissioned by Development, Okayama Art Summit in Japan (autumn 2016, curated by Liam Gillick) where it has initially been shown. In this 12-minute long video, Shimabuku muses on the homonymic nature of the word "bow" (also in Japanese: Yumi), which refers at once to the weapon used to propel arrows and a device for playing stringed instruments. A true wordplay-lover, Shimabuku literally stages the speculative passage between the archery equipment and the musical tool. In Bow to Bow‘s symmetrical sceneries, set in the Japanese archery place at Kibitsu Shrine, Okayama, we first watch a young man methodically firing an arrow towards a distance target. Then, two men (one is the artist himself) practice pizzicato on archery-bows. During the next indoor scene, a man holds a contrabass while a woman rubs the strings with a weapon-bow. After that, we listen to a musical duet performing a composition by Nomura Makoto: one rubbing his contrabass with an archery-bow accompanied by a woman playing hers with a regular music-bow.

The bow (the musical one as well as the weapon) is an interesting object when thinking of its origins. It is most probably that the idle hunter turned his useless weapon into an instrument. Here we possibly find one of the first "perversions of use" of a deadly tool. The assailant becomes a composer.

The handling of the contrabass itself is also worth considering. In the oldest manner, the bassist handles the bow like chopsticks, whereas for the other string instruments, such as the violin, the musician holds the bow overhand like a knife. It is relevant for Shimabuku to speculate on the instrument‘s geographical and cultural origins.

However, the work is obviously not an anthropological reconstruction, neither scientific nor didactic. The absurd beauty and elegance of the performance suffices in itself. Bow to Bow is an excellent example of Shimabuku‘s poetic and witty bricolages.

Shimabuku unveils once again the absurd aspect of language. Back in 2006, he expressed his literal understanding of the typical British dish "fish and chips" by filming an aquatic ballet between a potato and a fish (Fish and Chips, 2006–2008).

Shimabuku finds an endless source for his work in language. It portrays him as a perpetually displaced subject, some sort of a permanent tourist. He surveys his surroundings with a perspective which turns daily practices into foreign encounters. Like this, he appropriates existing incongruity in our everyday lives. Thus, no need to look to outer space to spot alien oddities. It is mainly a way of looking at things: for some, a stone might only be a mundane stone; for an octopus it might be a valuable belonging (Octopus Stone, 2013).

The series of photographs City in the Sea, 2013 is once again a matter of perception; a rereading of the daily unremarkable. While looking at salt crystals with a microscope, Shimabuku is struck by an epiphany:

The fantastic regularity of the crystals is indeed a twin of the pyramidal ancient edifices. Again, several perspectives are welcome, one might see a photographic enlargement of a mineral, another might find mythical vestiges of the ancient world.

City in the Sea directly suggests the artist‘s reading and what we can possibly identify in the pictures. On the contrary the photograph of a piece of New York‘s sky, Untitled (New York), 2000, remains silent. Are we looking at an elaborate, abstract pattern drawn by random traces of smoke left by a plane? Or a leftover from Yoko Ono‘s skywriting action she did on the same day, in the same city? Is it a skywritten letter or ideogram in an unknown language? Finding figures or things in the clouds might be a suitable note for reading Shimabuku‘s way of doing art.

Several of his artworks belong to international museums‘ collections such as Centre Georges Pompidou, Paris, France, the Nouveau musée national de Monaco, the Kunsthalle Bern, Switzerland, The Museum of Fine Arts, Houston, USA, the National Museum of Art, Osaka, Japan, and the Museum of Contemporary Art in Tokyo, Japan.

In 2017, Shimabuku will participate in the 57th International Art Exhibition, titled Viva Arte Viva, at the Venice Biennale and in La Biennale de Lyon.
www.barbarawien.de