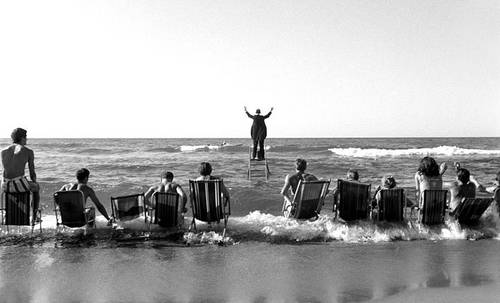 Delve into the realms of the impossible, the fantastic and the unknown where art and life overlap.

This unique exhibition presents the work of ground breaking 20th century Polish theatre director and artist Tadeusz Kantor, alongside that of younger Polish artists Pawel Althamer, Katarzyna Kozyra, Robert Kusmirowski and Artur Zmijewski. While the works in the exhibition include a variety of media - sculpture, performance, installation, photography and video – that all engage with ideas of performance.

The exhibition includes many of Kantor’s early preparatory drawings, props and documentaries of happenings and includes his wonderful Sea Concerto, in which a conductor ‘directs’ the natural sounds of the city and the sea.

The performances by Pawel Althamer and Katarzyna Kozyra have been produced by Barbican Art Gallery in association with the Polish Cultural Institute, London.

The Impossible Theatre has been curated by Sabine Folie and Hanna Wroblewska and organised by Kunsthalle Wien in collaboration with Barbican Art Gallery and Zacheta - National Gallery Of Art, Warsaw.