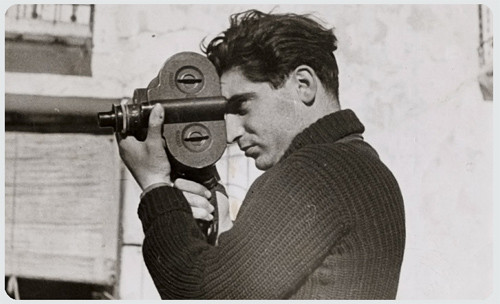 Robert Capa at Work
Gerda Taro
On the Subject of War
Barbican Art Gallery reflects on conflict and its visual representation.

Seven years after the West’s ‘War on Terror’ began in Afghanistan, Barbican Art Gallery reflects on conflict and its visual representation, in a series of interrelated exhibitions.

This Is War!
Robert Capa at work

Robert Capa (1913–1954) is one of the leading photographers of the twentieth century and defined how modern warfare was photographed.

This exhibition, which includes over 150 images, some never-before-seen photographs and newly discovered documents, illuminates Capa’s working process and features many of the photographs that have become iconic images of war.
The exhibition features six of his most important war stories; The Falling Soldier and The Battle of Rio Segre, both capturing the Spanish Civil War; the Sino-Japanese War; American troops landing in Normandy on D-Day; and the liberation of Leipzig, including images of the last man shot in World War II.
In 1936, just a month into the Republican struggle against General Franco’s fascist army, Capa made the most famous image of the Spanish Civil War, Death of a Loyalist Militiaman, now generally known as The Falling Soldier. It was to become the ultimate symbol of the Spanish Loyalist fight and has been dogged by controversy ever since.
For the first time, this exhibition reveals all the known images taken by Capa on that day, including newly discovered negatives which re-surfaced in 2007. These images may shed new light onto the ongoing debate about whether Capa fabricated the most famous war photograph of all time.

The talented and groundbreaking German photographer, Gerda Taro (1910–1937) spent her brief but dramatic career photographing the Spanish Civil War alongside Robert Capa, her lover and collaborator. She was one of the first female photographers to work on the frontline and the first to be killed in action in 1937, aged just 26, whilst covering the battle for the city of Brunete.
Taro’s unflinching images of the casualties of war, distinguished by her experimentation with the dynamic camera angles of New Vision photography, are a remarkable contribution to the tradition of war photography. This is the first exhibition of her work in the UK.

On the Subject of War
artistic responses to Iraq & Afghanistan

Conditions of war have changed since the 1930s and 1940s, but the potential of war photography to shape politics, opinion and lives, remains real.
On the Subject of War presents some of the most significant works of international contemporary art made in the context of current events in Iraq and Afghanistan: Omer Fast’s The Casting, (2007); Geert van Kesteren’s Why Mister, Why?, (2004) and Baghdad Calling, (2008); Paul Chan’s Tin Drum Trilogy, (2002–05) and An-My Lê’s 29 Palms, (2006) and Events Ashore, (2005–08).
Each artist reflects on the subjects of war and their experience of conflict – whether as victims, combatants, perpetrators or observers. At the same time, each considers how visual imagery mediates our experience and understanding of conflict, and questions the capacity of art to effect change in a time of war.
www.barbican.org.uk