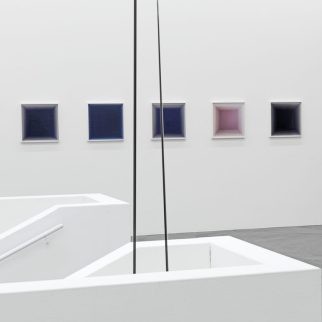 Swedish artist Alexander Gutke’s exhibition begins with a piece that tells us about endings: 9 way to say it’s over is the enigmatic title of the work for which the artist used the well-known endings of selected films from the 1920s to the 1960s. Like a filmstrip, a band of different sequences plays as a vertical column on the wall, greeting the visitor to the exhibition as they arrive and depart.

Many works reflect Gutke’s intense engagement with the medium of film. The motif of the loop, an endless return, is a key element of this, playing an important role for the artist both as a sculptural arrangement as well as within the film, video and 16-mm projections shown. This is underlined by Measure, a copper tape measure presented as a Möbius strip, another concept of an ongoing movement, without beginning or end.

The large film loop made by the work Vertigo is striking, drawing a vertical line through the exhibition space in the foyer, drawing the gaze through the stairwell structure and down into the lower exhibition level below. Using a system of mirrors the projection is focused onto the centre of a vinyl single that gives the impression of a label turning around or a rotating spiral staircase. In this particular location in the Kunsthaus Baselland the installation realises the pull and the sensation of vertigo generated by the famous sequence of the film Vertigo, making a physical experience of it possible.

The idea of the loop recurs in the work Folded into One too. The artist has printed 500 cardboard boxes with an image of a starry sky, inside and out. One could say that a starry sky – emblematic of endlessness – is given folded form by the artist, a tiny universe encapsulated in each individual box. And the work Horizon, too, which Gutke stamped on the adjoining wall, tells of the possibility of making a seemingly endlessly large number of days, (in Swedish ‘dagar’,) a figure we cannot conceive, nonetheless tangible, into something we can physically experience. Gutke himself compares it to viewing the sun set over the horizon, something that appears much more like a two-dimensional image than a consequence of the earth’s curvature.

Gutke also uses sunlight for his five-part work series 9 to 5, Stormgatan. Throughout a quasi-standard nine to five working day the artist recorded the light conditions on his studio wall every hour. He then prints the photograph, which he reduces minimally in size, and hangs it on the very same spot, photographs it again on the next hour, prints it out again, and so on. Ultimately the artist can only control the camera position and the process, but not the result, which turns out more or less colourfully, lighter or darker depending on the overlapping, the time of year and light conditions.

With its minimal, clear arrangement of works the exhibition in the main space promises a gentle, rather light tone, even if the work Loud Loud detracts from this cadence in a humorous manner. In the centre of a gallery wall several metres tall and broad is a replica of a Marshall volume control transforming it, instantly giving the wall the appearance of a sculptural, architectural body. And this with just a Marshall dial, which here, apparently, will only turn to maximum, and which is an in-word for the (generally very loud) rock of the 1960s and ‘70s anyway.

New and older video, monitor and 16-mm projections and works are presented in a more concentrated arrangement in the smaller upper three exhibition spaces. One of these is Auto-scope, a looping 16-mm projection that – as if filming itself – shows a headlong journey through a 16 mm projector, the view trained up on the sky and then down again to the snowy landscape around, all at top speed. The confusing perspective gives the viewer an inkling of what it would be like if they were, themselves, a piece of filmstrip, being drawn through the air in a metre-high loop – akin to Vertigo – only to be catapulted back into the camera. The artist speaks of an ‘out of body experience’ that is possible when observing this scene.

The work Singularity installed in the next room equally considers the possibility of physically experiencing a 16-mm projection which, again a loop, is this time lead and folded around the whole exhibition space covering more than 50 metres and spooling through countless small reels. The space is measured – apparently twice, because the small projection in the corner of the room shows a measuring tape that counts out the 50 metres centimetre by centimetre.

If the gentle sounds of the rattling projectors dominate the exhibition, the visitor is then surprised by the piercing tones of the work Shattered. A projection over a sandy surface shows the instant of a glass shattering. Once again Gutke skilfully transforms a two-dimensional image and a plane of light into three-dimensional, sculptural form, at the very moment when it seems to disintegrate. And the work Draw (a picture says a thousand words) to be found in the same room replays a moment lasting a blink of an eye in which a matchbox burns and its form is completely transformed, though the gently dwindling flame lingers on.

Alexander Gutke was born in 1971 in Kungälv, Sweden and lives and works in Malmö.