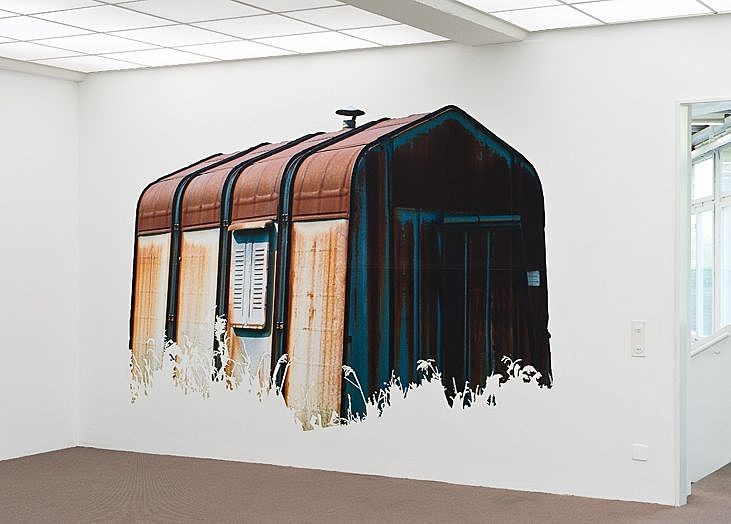 Under the title, “Leaking roof”, Basel-based artist Bettina Grossenbacher (born in Thun in 1960) presents the Swiss premiere of her latest video installation “Mikado” (2010) as well as a number of further photographic works specially created for the exhibition in Kunsthaus Baselland. Grossenbacher worked as a freelance actress before graduating from the School of Art and Design in Basel with the main subject Video. She has displayed her works in numerous international solo exhibitions (among others Kunstraum Düsseldorf, 2004; Galerie im Kunsthaus Erfurt, 2000) and has also participated in group exhibitions (among others Kasseler Kunstverein im Fridericianum, 2010; Kunsthalle Luzern, 2009; Laznia Centre for Contemporary Art Gdansk, 2008; Kunstmuseum Thun, 2008).

For some time now, Bettina Grossenbacher has been engaged with rooms and houses, whereby these can be understood both as places for the familiar and as a refuge, and also as places that are sought out by the uncanny and where imagination can get out of hand. In psychoanalysis and dream interpretation, certain areas are exemplary of mental states and personality traits. “Leaking roof” can paraphrase that red thread running through the exhibition, which describes the spaces as a place of projection for longings, desires, but also anxieties and clandestine things.

In the film, “Mikado” (2010), a young woman, the protagonist in the film, enters an empty house and undertakes a time travel into the past with her foray through the rooms containing old furniture and accumulated objects. Despite her youth, a copious amount of memories seems to rise to the surface. The girl pulls out drawers and explore their contents; she tries out a lipstick, push aside curtains and feels her way through the relics of a distant time. The past enters into a relation with her, but doesn’t uncover the exact connection. This mood is interrupted by the appearance of a grown man who sometimes wanders around the garden and sometimes enters the house. A conversation between the two, however, doesn't help in comprehending their relationship. “Every detail of the film's plot is carefully choreographed, certain motifs recur again and again: mirror effects, reflections, curtains of varying transparency, insights from inside out and vice versa – the house becomes a reflection of inner states. Similar to the plays of Samuel Beckett, the viewer's need to understand is deliberately undermined, even the satisfaction of voyeuristic pleasure by watching a family drama is not fulfilled. The artist entices us to abandon the search for meaning and to let us be carried away by the power of images and language.” (Eva Scharrer)

The video work, “16o12’N/22o51’W” (2011), plays with the mysteriousness of dwellings, and this time, the focus is on a ship. With a fixed camera angle the artist filmed a ship wreck that ran aground on the Cape Verde Islands in 1968 and since then ages away. The slow disintegration of the wreck by the surf is the main motif for a story that develops in the subtitles. The text describes in detail a fight between three men on the bridge of a ship. The image of the surf, which alternates between slow and normal speed, corresponds with the respirations of the recipient, which alternate according to the sound of the waves, if he/she is willing to let in the described story. The motif of the stranded ship becomes a cipher of timelessness, a shell with a secret, known only to a few.

The work, “Haus Nr. 13” (2011), consists of nine light boxes that depict the interior of an empty house. The rooms are characterised by parquet flooring, wooden built-in closets and a heavy wooden railing. The house is unknown to the visitor, and he/she will never know it. The light boxes, themselves wooden objects, show the moment when the rooms are handed over by the old user to the new. The absence of personal traces makes them the perfect projection screen. This perception is supported by texts, which have been inserted into the images like titles of a film, and when read continuously, describe a murder.