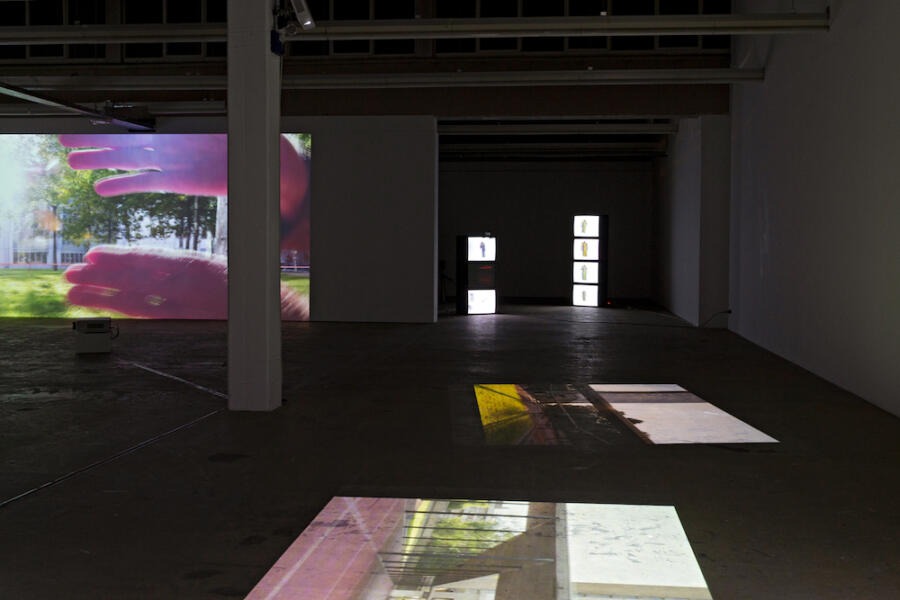 As soon as you step into Christoph Oertli’s exhibition, it becomes clear that this is about more than moving images projected onto various backgrounds, or even media works generally, which can more or less be avoided. Christoph Oertli’s works demand physical presence. Visitors enter rooms with constructed screens via a platform, passing by monitors and through PVC wall partitions to reach sound works. For years, this has been the defining and characteristic feature of the Swiss film and video artist’s work: people in their built environment, more artificial than natural, somewhere between reality and fiction, dreamlike or — unfortunately — sometimes cruelly realistic. Oertli’s video works show people how he lives, loves, behaves, and tries to understand and conceive his identity — globally, spanning genders and generations, close, intimate, inescapable.

In long, sometimes elaborate orchestrations, he builds the filming locations himself, not unlike a stage production, as in The ground is moving from 2010. The individuals featured within are people Oertli has met during his trips and stays abroad, some of which last several months. As perfectly staged and almost photographic as the end result may sometimes seem, the beginning is open and processual. Filming locations, situations, the people in them — they all fall into place for Oertli at the moment he himself is present in these places and countries. Typically, Oertli does not travel to these locations with a finished script, but instead finds people he encounters in Africa (Tension Box, 2014), Asia (Campus, 2013; Sensing Bodies, 2020), or European cities such as Brussels (The ground is moving, 2010; Monsieur René, 2012; Timeline, 2014; Gare du Nord, 2017, etc.), Basel, and Zürich. According to Oertli, the great challenge is the fact that you still don’t understand much about a culture after a certain period of time in a place, though you know infinitely more than you did before the journey. For him, this experience continually separates you from other people. Sensing Bodies is thus not a “film about Japan”; it emerged instead out of an interest in the use of our bodies in highly developed societies. It is the camera itself that enables Oertli to maintain a detached gaze, and also to focus occasionally on the seemingly tiny details that he points out.

In each of these settings, Oertli does not allow any of his actors to report something happening or reenact a situation. Those portrayed narrate — sometimes with fewer words, sometimes with more — their own stories, their own lives, with the utmost directness and candor. It is therefore understandable why in many works — particularly the earlier ones — the artist himself can frequently be seen: how he performs, sings, and acts in front of the camera on its tripod — with the utmost directness and openness here, too, but also vulnerability (cf. Barfuss, 2002/2020; Messages personnels, 2005/2007/2010/2020). And perhaps it is precisely this that makes it clear that his gaze through the camera, to which he also exposes himself, is not a voyeuristic one. Oertli films life — our life! — in the here and now, gently examining it and circling around it in order to get right to the middle of it with a 360-degree view. The artist’s body is just as directly present in his works — whether through the position and height of the camera and the resulting view, or through his walking, standing, breathing, or holding his breath while filming. It’s only during the second stage, when the camera is brought into the studio and the images are edited into a montage, that this direct experience of the artist is taken to an analytical level and the sequences are set in their specific rhythm and order of images.

In his retrospective exhibition at the Kunsthaus Baselland, the filmed, built environment of his works, his cinematic portrayal of interiors and architecture, now seems to have been turned inside out. Instead of voyeuristically gazing at what is projected, Christoph Oertli offers us an opportunity to directly encounter something — an experience in real time. (IG)

Christoph Oertli (born 1962 in Winterthur, lives and works in Basel and Brussels): foundation course and graphic design at the Schule für Gestaltung Zürich (now ZHdK), 1982–1987; stage design at SF DRS, Zürich, 1988–1990; audiovisual design under René Pulfer and Enrique Fontanilles at the Schule für Gestaltung Basel (now FHNW), 1992–1995. His films and videos have been presented at numerous festivals: Sensing Bodies will be shown at the Solothurn Film Festival.

Christoph Oertli and Ines Goldbach would like to sincerely thank the Erna and Curt Burgauer Foundation, the Ernst and Olga Gubler-Hablützel Foundation, doggweiler Möbelkultur, the Art Institute of the College of Art and Design FHNW, Thomas Jeker, Hans Jörg Luchsinger, IEU consulting Liestal, and Bernard Voïta for their support of the exhibition, as well as the Binding Sélection d’Artistes, without whom the monographic catalogue — offering an overview of Oertli’s entire oeuvre for the first time — would not have been possible.

The book launch will take place on March 24.