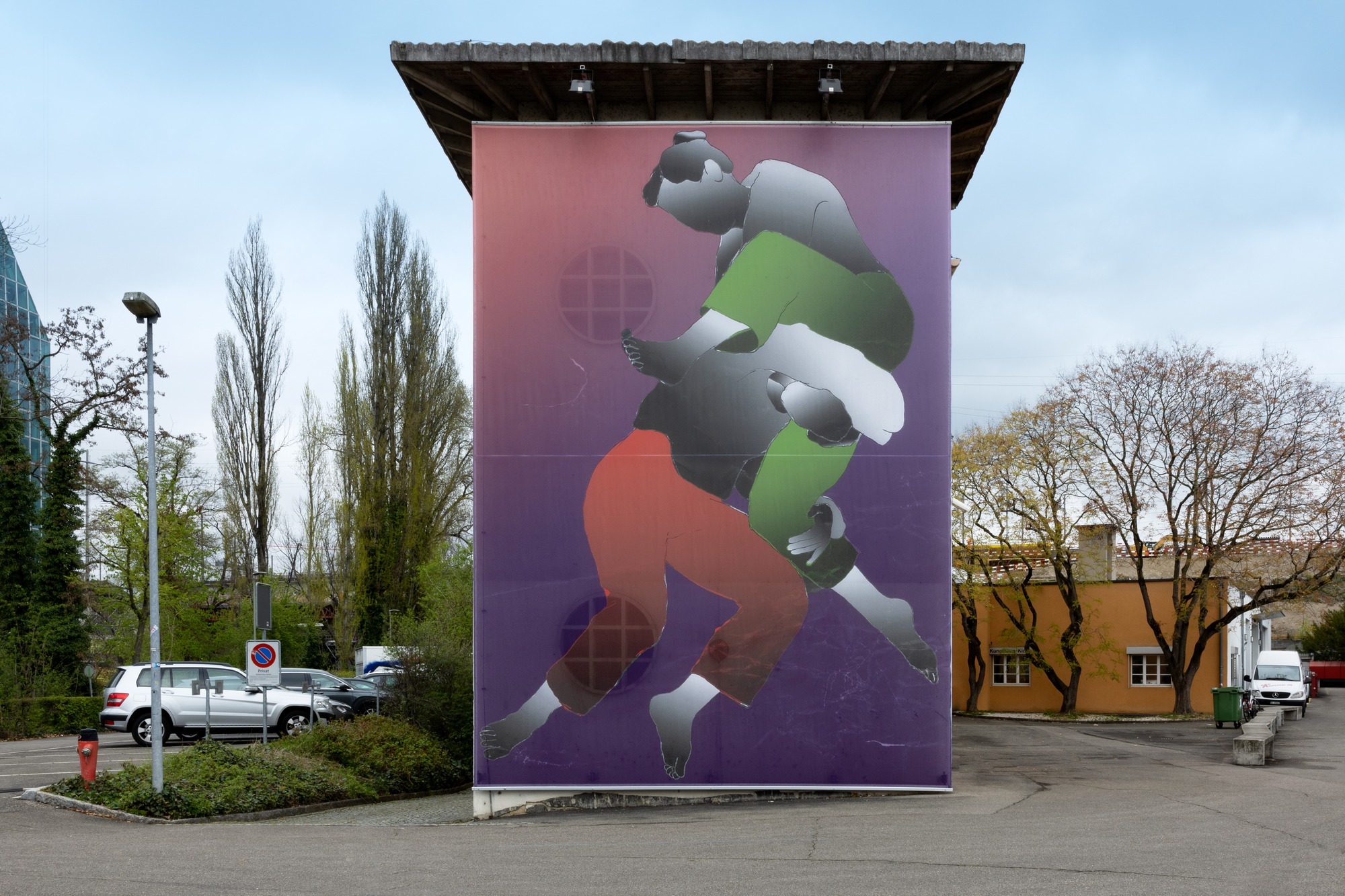 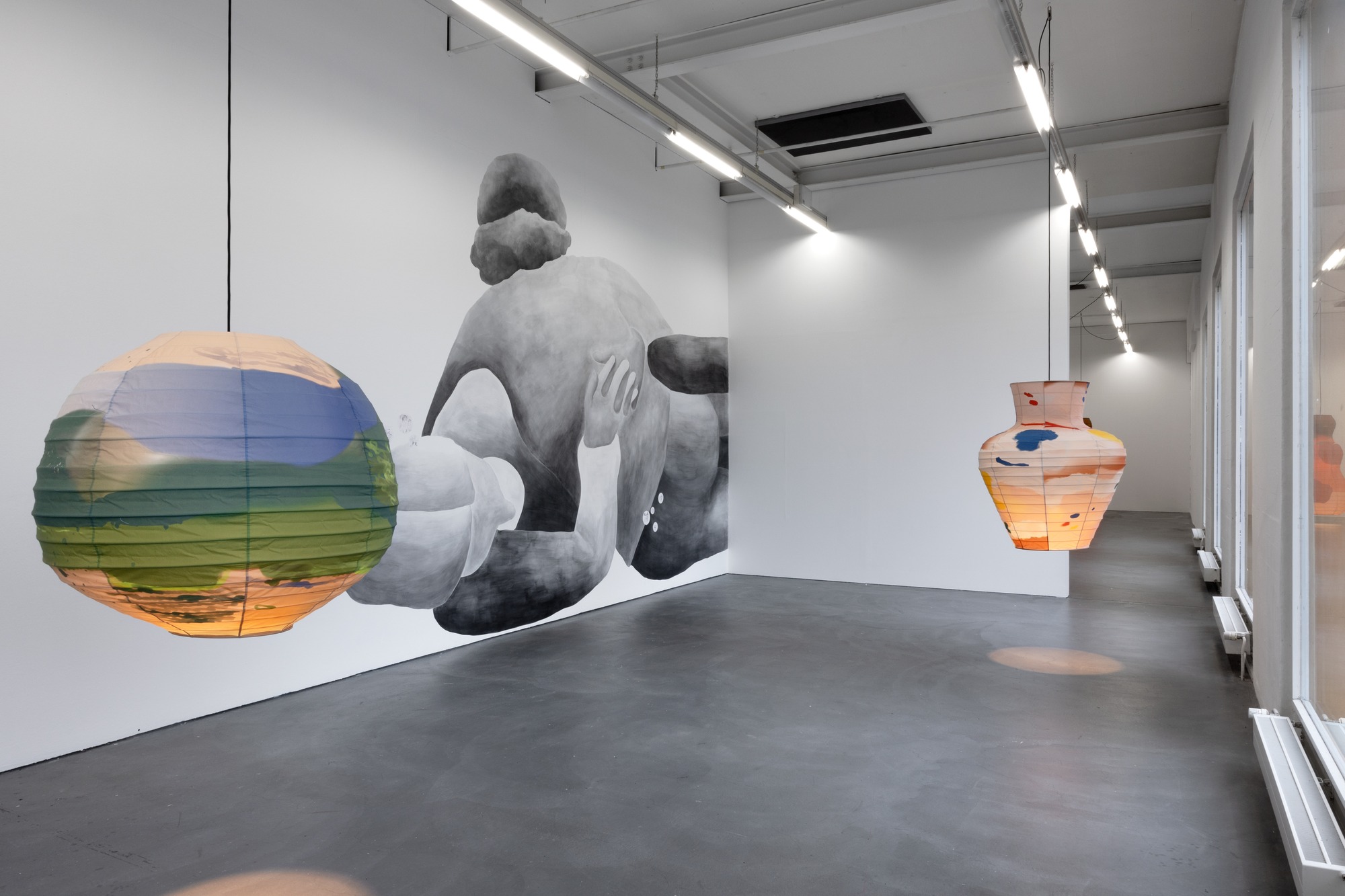 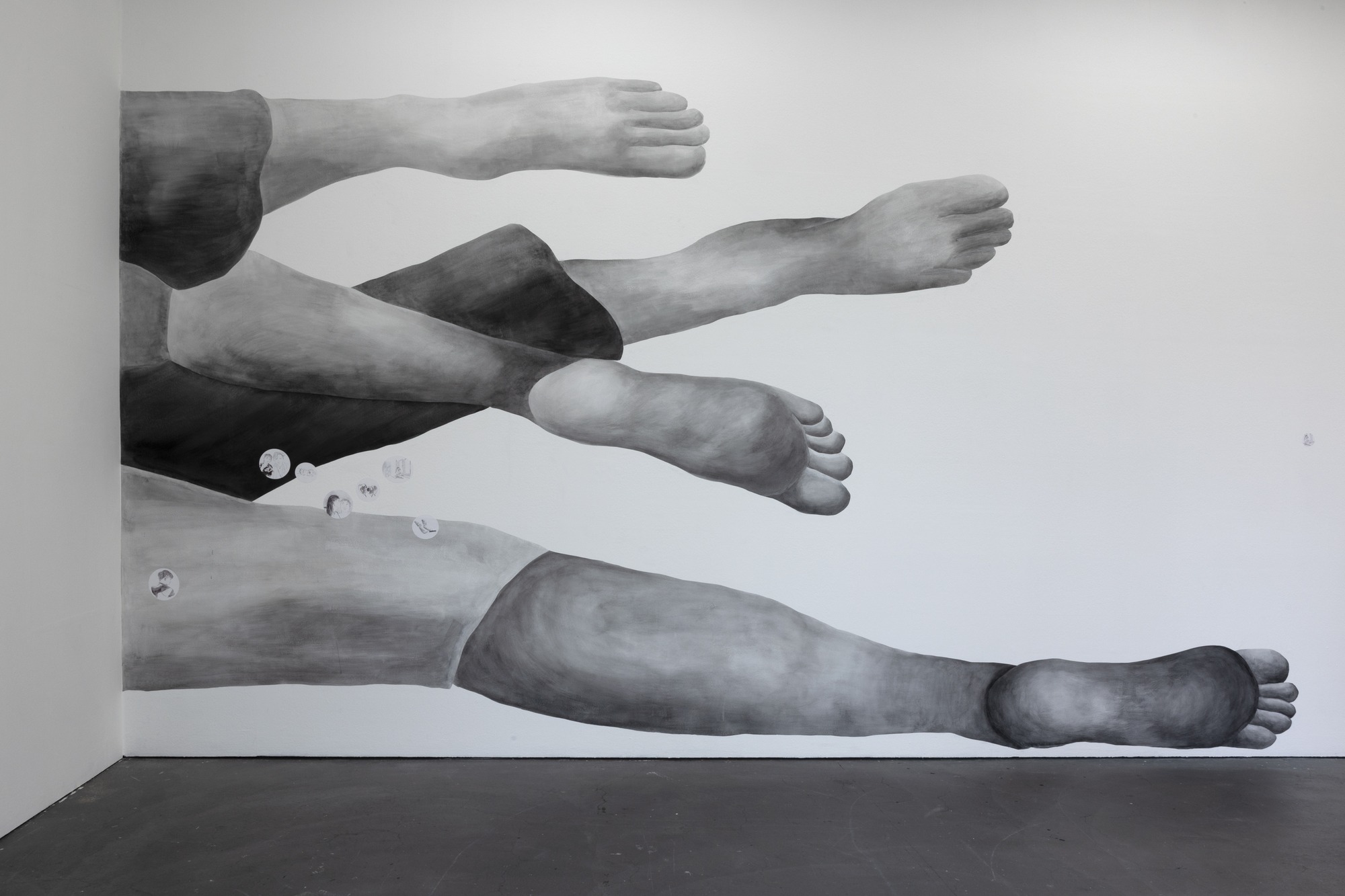 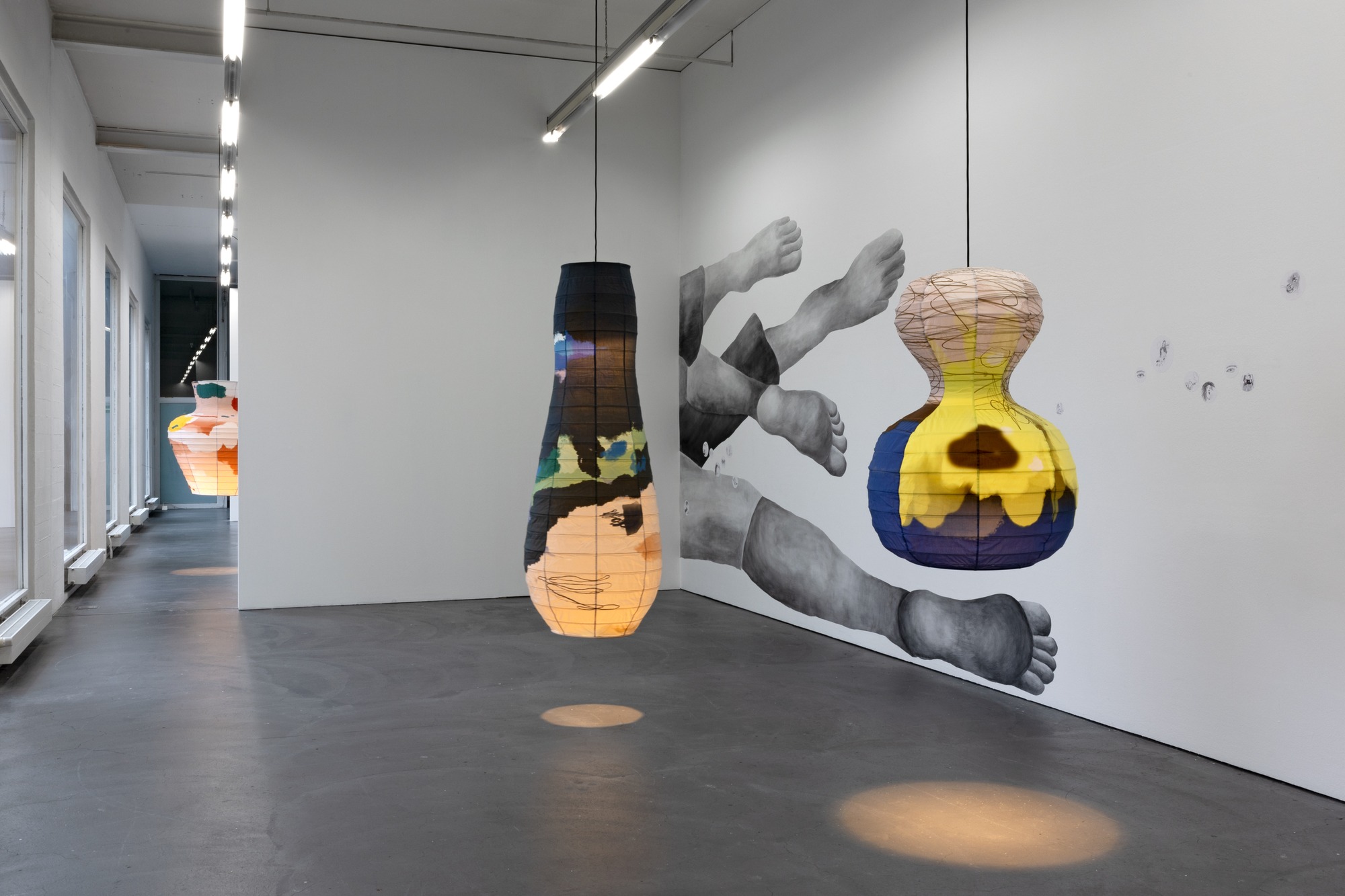 Coming from drawing, or rather starting from it, Claudia & Julia Müller extend the medium within their artistic practice, not only into space, but also onto different levels. As a result, their additional project for the annex focuses on overlapping spatial elements that will consequently occupy both the exterior and the interior of the building for several weeks. In their project, an expansive drawing unfolds in layers – with overlaps and shifts – through objects, collages and other image planes. This also reveals the possibilities of drawing on different mediums and across various genres.

Two bodies—encountering one another, becoming intertwined, interwoven, struggling, loving. Whether both figures come together by turning towards or away from each other remains an open question. The momentum of their movement almost seems to be in a state of rest, which at any time could swing either way like a pendulum—a momentum of restlessness and occasionally uncertainty.

It is precisely this aspect that Claudia and Julia Müller seem to continually strive for in their work. As an artist duo, the two sisters—Claudia (b. 1965) based in Basel, Julia (b. 1964) in Berlin—have been working together in constant dialogue since 1991. For their exhibition projects in Switzerland and abroad, the two artists, who are originally from the Basel area, often meet up for days or even weeks at a time, inviting other painters to help execute their usually large-scale paintings, which extend throughout a given architecture. Their painting practice becomes a sphere of action and experience, incorporating the viewer’s body as well as considering it in an instant of movement, stillness, and restlessness. It is precisely in this regard that the often-cited concept of “expanded painting” becomes tangible, taking us to the heart of the two artists’ work.

Their large-scale figurative paintings and painterly drawings sprawl across walls that are several meters in length, allowing the viewer to step into a pictorial space that regards us as active participants rather than passive observers; their paintings’ formal language extends across walls, corners,

and architectural elements, as well as ceramics and objects. The artists will now be exhibiting for a year on the outdoor banner in front of Kunsthaus Baselland, which is over eight meters high, while simultaneously unfolding the layers of their work on the walls and lamp objects in the Annex’s interior spaces until mid-May—which provides a great opportunity for their work to be experienced in its full extent.

Also in this context, we can see that uncertainty is in the details, arising in the fractures that pervade even what is seemingly unequivocal. This becomes apparent as we follow the itinerary that the two artists have designed for the Kunsthaus Baselland. Upon entering the space, we encounter forms executed in painterly gestures that seem to reach out to the viewer. We cannot instantly recognize them for what they are: the feet and legs of large recumbent figures that seem to be working their way through the dividing wall. It is only in the second part of the room that the complete form becomes distinct and intelligible.

We would not be talking about the painters Claudia and Julia Müller if we could not spot their interest in this tipping point—between the unequivocal and the unsettling, narration and abstraction. It is therefore no coincidence that the artists direct viewers to adopt different standpoints to face the wall painting and the lamp bodies hanging in the room at varying distances. Particularly when looking at the wall drawing up close, what was a familiar form a second ago seems to dissolve into broad expanses of iridescent black that increase in density.

There is something else that stands out when being this close to the painting. In a swift, unpretentious gesture, the artists have applied circular stickers to the recumbent figures that feature modest subjects: fragments, minor scenes, everyday occurrences. It seems as though the previous gesture of homage to painting is being met with certain sovereignty, as well as a feeling of ferocity. Claudia and Julia Müller take painting seriously,
pay tribute to it, but also acknowledge the need for its constant critical questioning. What happens in the room when the pictorial space expands from the walls to the stickers with small drawings and lamps—engulfing their bodily form and dimmed light—to finally penetrate the sphere of action of the person standing opposite? What if the drawings’ dimensions change, their carrier, their carryover? What was familiar a second ago, and perhaps perceived with a slight hint of indulgence, has now become volatile and unsettling.

This is the instant when we might best understand what the two artists have been addressing in their extensive and multifaceted work for many years: How do we encounter each other as human beings? When does human sympathy turn into individual strategies of self-representation and avoidance?

How fragile and vulnerable is the human body? How quickly does this tipping point of dominance arise and becomes itself dominant? How are power structures played out? The times we are living in show just how urgent these questions are. After more than two years of a pandemic, we have now been witnessing a war at the heart of Europe for weeks. This reveals not only the fragility of peaceful social structures, but also our deceptive belief in independence and stable democratic circumstances. It is once again clear that humanistic values are not a given, but have to be negotiated and upheld anew each day. It is vital to remain vigilant. (Text by Ines Goldbach)