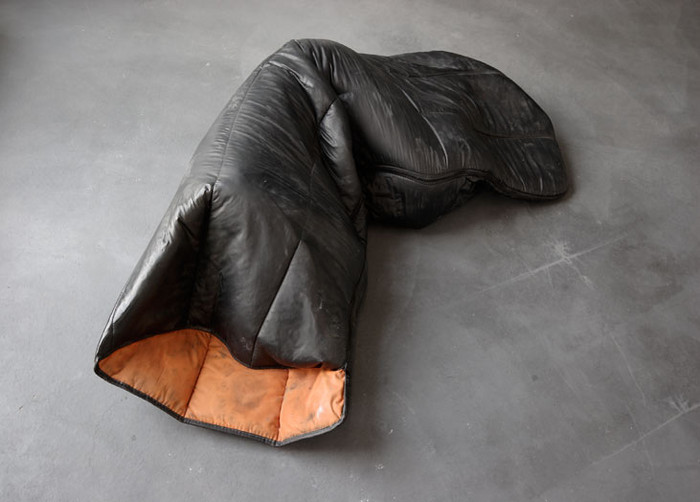 Gavin Turk (born in 1967 in Guildford, lives in London) ranks prominently among the group of Young British Artists, and has already had solo shows in the Museum for Contemporary Art in The Hague (2007)and amongst others at White Cube › › ›

Gallery, London (2004). Additionally, he has taken part in group shows at the Musée d‘Art Moderne, Lyon (2007) and at Schirn Kunsthalle, Frankfurt (2006). He produces sculptures, drawings, prints, and assemblages that explore both the activity of art-making and the role played by the artist, art-historical icons, and their importance in the art scene; he also raises critical questions about current social phenomena. “Burnt Out” is the artist’s first solo show in Switzerland.

Turk’s entry into the art scene was marked by his own declaration of death. “Borough of Kensington, Gavin Turk, Sculptor, worked here, 1989 – 1991” read a blue ceramic plate in his studio at the Royal College of Art. This was an appropriation of plaques commemorating eminent—and dead—personalities that are often placed on walls of houses in which those people lived. Turk used this visual icon and its dates alluding to his stay at the art academy, and presented the wall plaque for his MA show. Since 1991 Gavin Turk has constantly reinvented himself, involving numerous avant-garde artists such as René Margritte, Andy Warhol, Jasper Johns, Piero Manzoni, Marcel Duchamp, Meret Oppenheim, and Constantin Brancusi, music icons such as Elvis Presley, or political activists such as Ché Guevara.

The exhibition highlights the impressive breadth of his artistic oeuvre, ranging from bronze works, ready-mades, wooden sculptures, and silk screens to his most recent wax figure called “Somebody’s Son” (2007). The latter shows a Queen’s Guard bearing the artist’s traits in one of those typical sentry boxes that mark London’s traditional tourist image. In this case, Turk, who rose to fame with works based on his own face or incorporating the original model in question, is both a star artist and simply somebody’s son who guards the world, the Queen, and/or art. The work puts the notions of being a star and of being anonymous into perspective, and reminds us that it is possible to change quickly between the two.

In “Faded Glory” (2007) two faces are blended: Turk’s and Elvis Presley’s. Coated with a yellow layer of paint, the model barely shines through. Details disappear, as do memories—but who is actually remembered? Elvis is still present in people’s minds: even decades after his death, he is selling millions of CDs. Memories of Turk are also quite fresh—after all, despite his declaration of death, he is still very much alive and busy producing works. Possibly, this work is the final installment of a series of appropriations of people that the artist has created for a number of years under the title “Me as Him”. By appropriating the facial features of selected personalities, notions such as stardom, revolutionary acts, and character traits are transposed to a symbolic level, as are old myths shrouding the lives of famous people.

Questions of identity, authority, authenticity, and their associated values are relevant to those of Turk’s pieces that deal with the notion of signing artworks. “Relations” (2005) is a store sign made of wood bearing the two words “Gavin TURK”. “Turkey Foil Box XL”, in contrast, contains the artist’s name in an existing ready-made, a piece of packaging foil that refers to the process of packaging—an act designed to enhance the value of something, or to protect an object whose material and non-material value has already been augmented.

Most of the works on display at the exhibition address the issue of waste. “Waste” (2006) is a garbage bag painted in black and cast in bronze. A garbage bag, a stand-in for the enormous amount of waste discarded by today’s societies, becomes a monument and memorial made of indestructible material. “Painted Bronze III“ (2004/06) features two scrunched beer cans. Modeled on Jasper Johns’ “Painted Bronze” of 1960, Gavin Turk’s work also shows two beer cans, but he doesn’t turn everyday objects into fetishes to focus on their heroicizing in advertising; rather, Turk simply gauges the mood prevailing in contemporary society. The choice of this subject is no longer a taboo, but toys with it as a historical reference, while also raising artistic and social questions of current interest. Beer cans and other forms of waste are a serious problem for many communities. Who is responsible for this waste? Individuals? And what about the intricate links between big companies that market these products, as well as the disposal of the latter? Turk’s scrunched beer cans articulate a number of questions that go beyond the references to Jasper Johns. Turk’s works “Spent Match” (2005) and “Ariadne” (2006) are miniature sculptures that affect viewers’ emotions in more unexpected and direct ways. The spent match and the apple eaten up to the core, both made of painted bronze, radiate a poetic presence, and question our way of dealing with artworks and everyday objects as well as the value and status we ascribe to them.

“Burnt Out Fire” and “Ash Pile” (both 2008) are Gavin Turk’s most recent works. The eponymous fire and ash pile, both made of bronze, may be interpreted as an ephemeral, but physically solidified ready-made of an affluent high-performance society that alternates between unbridled enthusiasm, the constant craving for something new, and the threat of burnout.
www.kunsthausbaselland.ch