A Visual Exercise to the Delight of the Kunsthaus 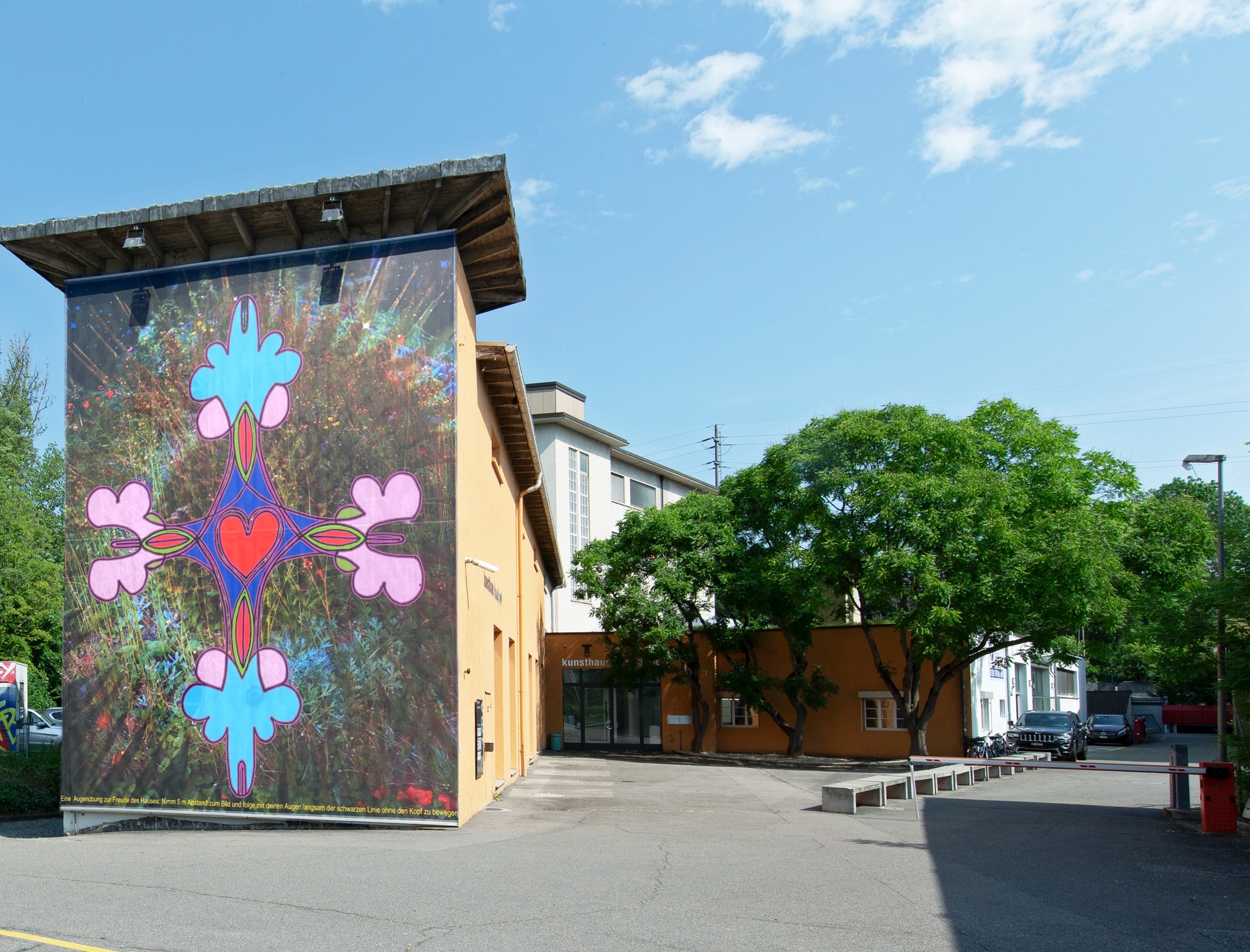 For the eighth year in a row, Kunsthaus Baselland is devoting its large outdoor banner to one work for the entire year. The work for 2021 will be created by the artist couple Gerda Steiner & Jörg Lenzlinger, who live and work in Langenbruck (Basel-Landschaft).

The title of the work alone speaks volumes: Eine Augenübung zur Freude des Hauses (A Visual Exercise to the Delight of the Kunsthaus). Gerda Steiner & Jörg Lenzlinger’s art is frequently enjoyable without the pair ever losing sight of socially relevant issues — or should we say that this is precisely how they approach such important subjects? Our existence in the here and now, our relationship with nature or, more specifically, our respect for nature, which is always able to surprise us with its beauty and uniqueness. But they are also concerned with how disrespectfully and irresponsibly we treat nature at times, instead of seeing ourselves as a part of it. How little we sometimes seem to believe in the power within us as part of a larger whole!

The pair have selected an image of an injured finger for the Kunsthaus Baselland 2021 annual pass. One might focus on the injury, but one could also, like Steiner & Lenzlinger, focus on something completely different: the healing of the injury, and our power of renewal. Gönn dir eine frische Haut (Treat Yourself to Fresh Skin) is the title of the image—it is no coincidence that the artist couple chose this motif in the middle of the pandemic.

Their major solo exhibition Too early to panic at the Museum Tinguely in 2018 invited visitors on a journey through time, and at the Kunstmuseum Chur in 2013 they created a huge, imaginative national park in what was formerly the Bündner Naturhistorisches- und Nationalparkmuseum before it was demolished, allowing the entire building to become wild. At our neighbors FRAC Alsace in Sélestat they are currently creating a large garden that will grow and thrive for the next ten years. Buried in the garden is a treasure chest containing over 250 treasures from the people of Sélestat and invited friends. In ten years’ time it will be dug up again and the aged treasures will be exhibited.

At their home and workplace in Langenbruck, around two dozen chickens of various species hop around the enclosure, happily, one could even say. In the greenhouses, plants big and small, new and familiar are growing and flourishing. “You can‘t approach nature at all, you are it,” emphasized Gerda Steiner and Jörg Lenzlinger in an interview a while ago. “Nature is fully inside you, in every pore, in every cell, in every bacterium, in every virus, there is no escape!”

Now the outdoor banner at Kunsthaus Baselland will be devoted to a work by the artist duo, inviting visitors to perform what they call a visual exercise. On the banner the instructions for this read as follows: A visual exercise for enjoying the building: Stand five meters away from the picture and slowly follow the black line with your eyes without moving your head. Once the viewer’s eyes get going, they move back and forth along the lines of the large banner, allowing numerous thoughts and images, the familiar and unfamiliar, to be lost, to be found again, to appear. It is almost like looking through a kaleidoscope, which — depending on how you turn it — can change again and again in new and fantastic ways. With a little more distance, another image presents itself behind the line drawing, as its soil, so to speak.

A large meadow piece, with the structure of a sunflower seed head becoming apparent at its center — and also the entire universe? Aren’t sunflower seeds aligned in a spiral instead of concentric circles, which could be described as following the Fibonacci sequence? Starting from one point, proliferating further and further, even out into the universe? Don’t thoughts sometimes behave in the same way? A beginning, from which many more thoughts and sometimes even actions may ensue, which in turn set something else in motion?

And as viewers of this large image, which in the coming months will not only be a part of the Kunsthaus but will also represent it, we stand in front of it and right in the middle of it at the same time. An image as instructions for seeing, thinking, acting. There it is again, this joyful invitation from the artist duo to us to widen our view, to move from the individual to the whole, from the egg to the chicken, from us to the universe. It would be best to carry out this visual exercise every time you find yourself in front of the Kunsthaus Baselland — whether it is spring, summer, fall, or winter, day or night, during times of crisis or everyday life. None of this will affect the work. Open 24 hours a day, always. It is crisis-proof, so to speak. And it always holds an invitation and enjoyment: it always goes all out. (Ines Goldbach)

Gerda Steiner (*1967, Ettiswil) and Jörg Lenzlinger (*1964, Uster) have been collaborating as a couple since 1997 and live and work in Langenbruck (BL).
They have participated in numerous international group and solo exhibitions, including the Venice Biennale in 2003. Their works have been shown in various group exhibitions at Kunsthaus Baselland such as Sehnsuchtsorte (Places of Longing) (2018) or Regionale 11, which was curated by Eric Hattan.