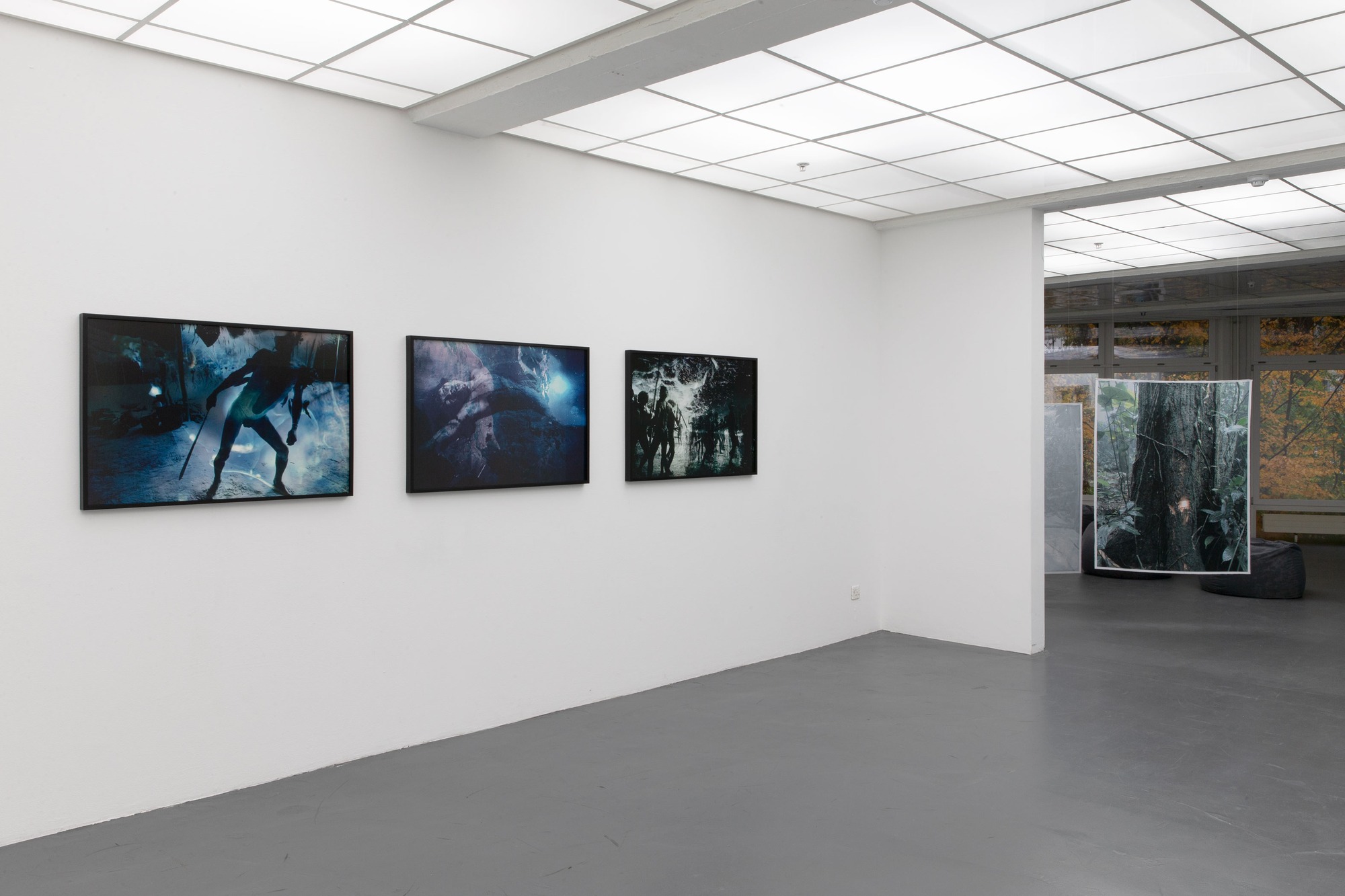 Claudia Andujar, Toototobi warrior - from the Yanomami dreams series, 2015; Ecstasy - from the Yanomami dreams series, 2015; Falling from the sky - from the Yanomami dreams series, 2015. © Musée d’ethnographie de Genève; Felipe Castelblanco, Andaki Territory and the Invisibles. Southern Edge of the Churumbelos National Park, Colombia, 2018. Courtesy of the artist. Installation view Kunsthaus Baselland 2021. Photo: Gina Folly
It is not an easy task to understand an area like the Amazon rainforest in South America from a European perspective. It seems that we are only gradually beginning to realize the considerable impact that this green lung of the Earth — with its forests and rivers, incredible biodiversity, as well
as the enormous threat it faces — has on our world climate. It is therefore extremely urgent to delve more deeply into this biologically diverse and scarcely researched rain forest in the north of Brazil. This is particularly the case with respect to those who have inhabited, understood, and protected this area for centuries, and who are also endangered like no other indigenous group in Brazil: the Yanomami community.

The photographer Claudia Andujar (b. 1931) has dedicated her life and work to this indigenous group native to the Amazon, who have an incredible understanding of the cosmos that surrounds them, its forests and rivers, as well as the spirits, myths, and rituals that emerge from them. Fotomuseum Winterthur is currently holding an extensive solo exhibition of the artist’s work. Conceived alongside Claudia Andujar and first showcased in São Paulo in 2018, its itinerary has included more than six venues around the world. As a way to broaden the audience’s experience of her work, the current exhibition at Kunsthaus Baselland presents a selection of photographic series executed in the 1970s and 1980s. These works, which are held in private and public collections both in Europe and Brazil, will be presented alongside drawings by the Yanomami artist Porako (c. 1905–1990) and the young artist Felipe Castelblanco (b. 1985), who is originally from Bogotá.

Claudia Andujar was born to a Jewish family in Neuchâtel, Switzerland. She and her mother were the only members of their family who were able
to flee Transylvania, her childhood country, via Switzerland to Brazil — escaping deportation just in time. As early as 1971, Andujar came into contact with the Yanomami in the Amazon. Through photography, she followed their life in the semi-darkness of the rain forest, soon becoming an important part of the indigenous community. Since then, she has stood up politically and as an activist for these oppressed people, who are threatened by the government and illegal gold miners in particular.

Andujar’s photographs are never mere documentation. Rather, they speak of tender proximity and a desire to understand what is both unknown and fascinating, of how nature and man encounter and shape each other through a symbiotic relationship of growth and decay. The construction of the Perimetral Norte highway through the formerly untouched Yanomami
territory and ecosystem has notably caused severe disruption to the life of the indigenous community. It has brought not only disease, but also violence and death to the Yanomami, whose lives are fundamentally dependent on a state of equilibrium with nature. Indigenous people have also been particularly impacted by the current COVID-19 crisis. Furthermore, the policies of Jair Bolsonaro’s administration are fueling a brutal, bloody extraction of natural resources, especially gold, and the clearing of large forest areas of vital importance.

While Andujar’s early photographs are mainly black and white — even if already incorporating important elements such as the application of Vaseline on the lens, image superimposition, or even the rhythm of dance and movement — later on the photographer increasingly draws on experimental aspects, like the use of infra-red film, intensifying or modifying existing colors. Through different camera set-ups, series layouts, and image editing, the series featured in this exhibition reveal the juxtaposition of urban life with an existence that is in complete harmony with nature. At the same time, these works provide an account of the photographer’s own journey, as she frequently set off in her black Volkswagen Beetle to bring medicine and materials like drawing paper and pencils to the Yanomami.

From the early 1970s, Claudia Andujar and Carlo Zacquini, a missionary close to the Yanomami community with whom the artist had some of her liveliest exchanges, started to bring paper and felt- tip pens to the Catrimani River area. The drawing material was meant to enable the community to produce an artistic view of their own lives, the nature that surrounded them, and their community. In the following years, a grant permitted this drawing project to be further developed. As a result, Yanomami artists such as Hiko (Porako), Taniki (André), and several others created a body of drawings that can offer a very special insight.

In a recent conversation, Carlo Zacquini described his meeting with the artist Porako in 1968. The artist was living in a Yanomami village on the edge of a small lake (Xaxanapi = the place with many hoatzin birds), a few kilometers from the Catrimani River’s right bank. Zacquini had settled on the left bank of the river, about ten kilometers downstream, in January 1965. From the mid-1970s, Porako lived in his relatives’ village near the mission, called Wakathau. By that point, elderly and suffering from a severe eye condition, he could no longer participate in the hunt. He visited the mission almost every day and tried to make himself useful. He created series of drawings during those years. Some of them became part of Claudia Andujar’s collection, like the one shown at the Kunsthaus, others have been scattered here and there. Porako died in the 1990s at more than 80 years old. Particularly when these drawings are displayed alongside Claudia Andujar’s photographs, we can see the emergence of a sense of proximity that is both intimate and tender.

The Basel-based, Bogotá-born artist Felipe Castelblanco participates in this exhibition with the work Rio Arriba [Upriver], a two-channel video installation. It shows a journey along the Putumayo River in Colombia’s Pan-Amazon region. Through a gentle flow of images, Castelblanco unfolds a landscape of global significance, where indigenous resistance, trees, stretches of land, clouds, light, and shadow collide. From the Siona people’s territory in the lower Amazon at 300 meters above sea level to that of the Quillacinga in the highlands of the Colombian Andes at 3,000 meters above sealevel, the film takes viewers along a meandering river that runs through contested grounds. Here, conflicts arise between overlapping jurisdictions, as well as between extractive industries and human and non-human communities exposed to many forms of violence along a vertical axis of power, spirituality, and occupation.

On the opening day, the Basel artist collective ffff have been showcased a performance with the artists Leah Nehmert (b. 1994, Geneva), Laurie Mlodzik (b. 1988, Heidelberg), and Mariana Murcia (b. 1988, Bogotá, Colombia). This performance has been conceived in response to the exhibition Inside the Amazon and the idea of a life that that is connected to nature. The artists’ collective fffff has focused on fermentation processes in order to explore the connections that make life possible at every scale. (IG)