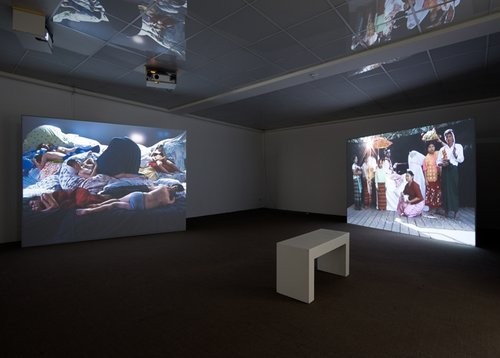 Pascale Grau ( born 1960 in St. Gallen, lives and works in Basel) shows for the first time the four completed Tableaux Vivants, works from the ongoing series that she started in 2005. Grau, who studied film and fine arts at the Hochschule für Bildende Künste in Hamburg with Rüdiger Neumann (experimental film), Wilfried Minks (stage design), Bernhard Johannes Blume and Marina Abramovic (fine arts), and studied MAS Cultural/Gender Studies at the ZHdK, has long been known in Switzerland as a performer and artist. In addition to her artistic activities, she lectures, curates, and is responsible - as part of the board - for the program of Kaskadenkondensator.

The term Tableaux Vivants describes the motionless re-enactment of sculptures and paintings by living persons. This stylistic method of image creation that combines theatrical elements with those of fine arts emerged at the end of the 18th century and is now experiencing a revival.

Pascale Grau has staged Tableaux Vivants in Myanmar (2005), Bolivia (2006), Switzerland (2007) and Karnataka/Southern India (2009). In each case, the aspect of different cultures and their specific traditions of dealing with images were as much of a focus as the individual experiences of the participants. At each location the artist carefully dealt with the process of pictorial composition, with each piece working together with local artists and institutions. Several of these workshops ended with the production of a Tableau Vivant. The artist asked the participants for a motif of „their art history“ or „their cultural life“. The image found in this process was then publicly enacted and filmed as A Tableau Vivant. Out of the footage she created single videos, shown in the exhibition at the Kunsthaus Baselland for the first time.

In Myanmar, an artist of the workshop chose an image of a still-practiced ritual in which little boys were temporarily given to the care of a convent. For the participants, the performing of the ritual was more important than the emotional re-enactment of the motif. In Bolivia, the Tableau Vivant was also developed as part of a workshop and resulted from much discussion, discarding and evaluating. The group chose the painting Ultima Cena by Jacopo Bassano, and paid close attention to the individual design of each figure. The aim was to include Bolivian culture to the template, in which Christianity and shamanism, tradition and globalized modernity, indigenous and the European way of life are facing each other. "The intent to present cultural diversity and artistic approaches in an analog process won unexpectedly clear contours, both in the running of the process and in the visual product" (P. Grau). With fellow artists from Basel, she realized Die Nacht of Ferdinand Hodler. In doing so, the focus was mainly on creating an exact match of the template, exempt from the historical interpretation. In her most recent piece, a workshop with students of the Chitrakala Parishath colleges, in collaboration with Indian artist Vivant Smitha Cariappa, led to a Tableau Vivant of an painting of the Mysore School (18. century) called Girija Kalyana. It describes the wedding of the gods Siva and Parvati who, standing before the divine tree, were anointed with milk by the father of the bride. The Indian Tableau Vivant is characterized by the inartificial, natural attitude of the actors, which is surely to be associated with the familiar everyday use of worship and tradition in Bollywood.

The stylistic device of the Tableau Vivant offers numerous possibilities: On one hand, the reenactment is directly linked to the particular reality of life, on the other hand, it offers the opportunity to pick up traditions in a performative way. Pascale Grau also emphasizes the possibility "to keep aspects of cultural memory in the sense of a contemporary perception of archives alive. The re-use can lead to a new assessment or a reassessment. The suppressed can re-appear in a resistive form. The performance itself functions as a document that can be read in a new way."
www.kunsthausbaselland.ch