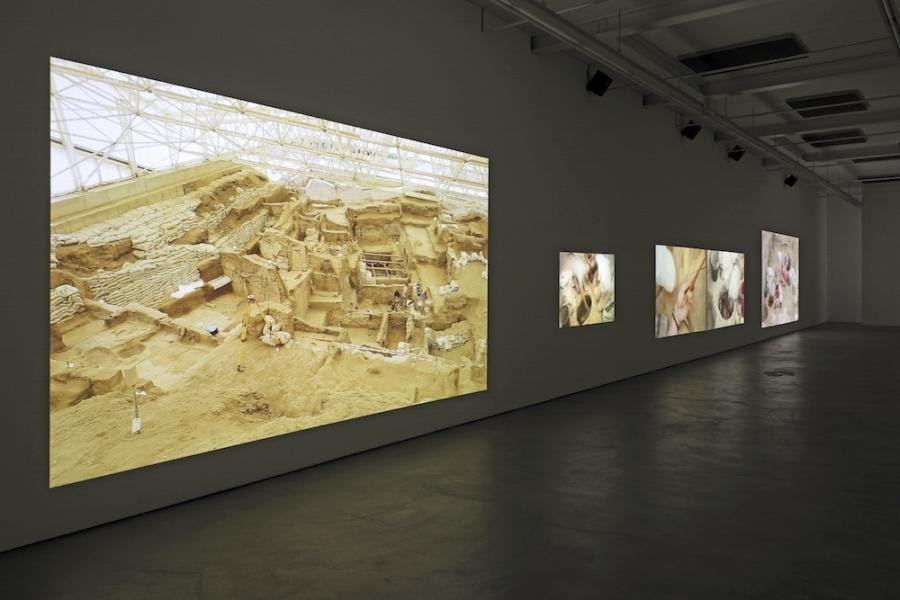 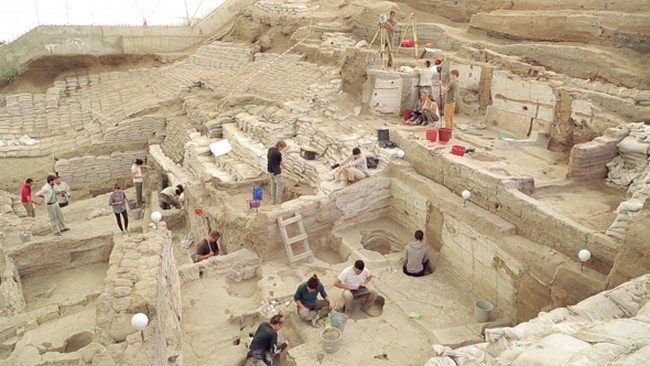 For her solo presentation at the Kunsthaus Baselland — her first institutional solo show in Switzerland —, Rossella Biscotti premiers her five-channel video installation The City, 2018, on her extensive research and filming of the Çatalhöyük archaeological site, Konya, Turkey. Biscotti investigates the relationship between the neolithic community that built the earliest urban centre known to date and the archeological community that has been unearthing it over the past twenty-five years.
Does the study of ancient artefacts and cultures provide a mirror with which we can consider the subjective values held by researchers in their own society? Biscotti worked closely with Ian Hodder, leader of the Çatalhöyük Research Project and Professor of Social Anthropology at Stanford University, and his international team, filming during the 2015 and 2016 excavation seasons. Since 1993, Hodder, one of the key thinkers of the post-processual school, has put his ideas to the test at Çatalhöyük. These include decentralised project management teams, self-reflective and diaristic reporting, co-authorship and data sharing and an understanding of the site as a living community uniting both professional agents and local actors. When on site, Biscotti recorded how these methods were activated in order to study an ancient people whose own community underwent various radical socio-economic changes.

Inhabited for a period of almost 2,000 years (circa 7500 to 5700 BC), Çatalhöyük has eighteen layers of occupation and was once home to a “proto-city” of nearly 10,000 people centred on a honeycomb maze-like complex of shared buildings that grew both out of and on top of each other. The film looks in particular at these urban forms in which distinctions between public and private were rather fluid, while also investigating the site’s complex burial rituals in which the dead were interred amongst the living. Likewise, evidence of the division of labour, between what was produced where and by whom on the site, seems to suggest a society with little to no social or gender stratification. These organisational principles, which show how another, possibly more liberated form of society functioned, are contrasted with the dig’s modern context in order to consider how our own social constructions have also advanced.

The 2016 season stopped abruptly due to the attempted military coup d’état in Turkey. The season would be the last of Ian Hodder’s twenty-five-year project. Rossella Biscotti was then on the first day of her second year’s filming and she adjusted her script to record the bureaucracy of closing the site, the meetings, the departure of the community and the empty landscape that remained.

In her multi-media practice, cutting across filmmaking, performance and sculpture, Biscotti explores and reconstructs obscured moments from recent times, often against a backdrop of state institutions. The site of investigation tends to leave its mark on her sculptures and installations as she composes new stories from personal encounters and oral interrogations. By examining the relevance of the recovered material from a contemporary perspective, Biscotti sensitively weaves a link with the present.

This weaving is what interested me the most and what I found most relevant to narrate today... Rossella Biscotti in conversation with Ines Goldbach (April 2018)

Ines Goldbach (IG): You are showing your multichannel video installation The City for the first time here at the Kunsthaus Baselland: a project you’ve been working on for some years now. The film contains a series of video notes shot at the Çatalhöyük archeological site during 2015 and professional footage shot during the 2016 excavation season. Archeological sites seem to guarantee that we are able to understand our past and maybe also understand why societies collapse. So it could be helpful for us today looking at our future. What interested you the most about this project, filming this society of archaeologists trying to understand a former society?

Rossella Biscotti (RB): When I first visited the site, I was struck by the architecture: a reversed cityscape with connected spaces that had grown both side by side and on top of each other, horizontally and vertically. My view from the top, and the working of the archeologists in plots below, reminded me of a Tati movie. I had read about the Neolithic revolution, how that civilisation underwent various and radical socio-economic changes, and how Ian Hodder, the project director, had been unveiling the site and his narration also by building up a living community of archaeologists, anthropologists, scientists and local actors who experimented with decentralised project management teams, self-reflective and diarist reporting, co-authorship and data sharing. I looked at them and the way they unearthed the stories; they analysed the data, making hypotheses on how that society radically modified the natural environment domesticating plants and animals, constructing for the first time a way of living together in an interdependent structure that also kept a strong connection with history, with ancestors, thus creating a complex ‘web of relationships’ and time-history. This weaving is what interested me the most and what I found most relevant to narrate today.

IG: So the title The City concentrates not only on the historical, past city of a community leaving there in Neolithic times but also on a contemporary community living and working today?

RB: Yes. The City refers to the proto-city or Neolithic mega-settlement but furthermore to the project of building a society, which happens anytime, anywhere.

IG: Which makes the whole project relevant for the viewer today. I think as well the way you’re presenting it, as a five-channel installation, offers us the chance to feel part of the landscape and part of the moment of excavation.

RB: The five-channel video gives the opportunity to experience the work by walking through the room and choosing your viewing position. In this sense it is like a sculpture. The sound is immersive but at the same time you are watching and listening to fragmented views of a bigger narration. The landscape is the last scene of the work, when, after the attempted military coup d’état, the director decided to call off that year’s excavation, which was also the last of a twenty-five-year project, and to close the site. It had to be my first day of filming according to a movie I scripted which of course didn’t happen. The site closed and I recorded the cleaning up and the bureaucracy, the empty site and the empty landscape. It’s the only time that, as a spectator, you are taken away from the site or labs and have an open view, as it could have been before or after any archeological project, or even before any society. I edited with a sound of a walkie talkie in which two people are taking measurements for the construction of a house (experimental house) to further suggest the idea of the starting of an occupation.

IG: We are mostly used to films and videos with a strong dramaturgy within the narration. Your multichannel film works, as you mentioned, are more like a landscape per se, leading viewers into the space, activating them to move within it, as not all the projections are running at the same time. At the same time the narration is very calm; sometimes you only see people working in peace and sometimes not even people but just the landscape of the archeological site. Plus with a duration of fifty minutes, the film leads you quite deeply into the scenery. What led to your decision about this kind of dramaturgy and narration?

RB: The narration is split in two. In the first part you'll have a feeling of the site at its full collective activity within the excavation, in the labs, as well as the discourse and hypothesis over the ancient civilization. Right at the beginning, while seeing people working side by side, you hear a group discussion where Rosemary Joyce, an American anthropologist and social archaeologist, mentions how society is about community sharing an investment and not about biologically related people: ‘if you think about it from the perspective of all the people who have an investment in the continuity and reproduction of the house, for example, that investment is the proof you belong... your identity with that space is dependent on investment, the fundament of labour’. She continues: ‘for me that particular data is entirely predictable if what we talk about is the notion of society in its very essence, which is collaborative work by a group of people intent on creating and reproducing an estate’. For me this sets the basis of the first part of the narration.

At exactly halfway we see a rotating camera over a few empty Neolithic buildings while hearing and seeing emergency meetings and the decision to pull out. From here on there are no words; the last two burial sites are lifted, the site is swept and prepared for its bureaucratic closure. The images are clearly beautiful, but there is no life. We hear numbers being called, which are the composition of the matrix for the dating, and the film shifts from the manuality to the data collection, composition and sharing. The site will be studied only within its digital form.

At this moment I also thought about all the places which have been destroyed or are inaccessible and only exist now through documentation.

IG: In the last projects you were mainly concentrating on different media like sculpture or installation. This is — beside early projects by you — the first time you are working with only a film installation. Why did you decide to concentrate for this project only on the medium of film?

RB: Since I first visited the site I knew I wanted to work with film. It’s the best medium in which to work on the stratification, the complexity of such a space, its communities and stories.

IG: What interested you the most in the archeological site per se? As far as I know it was one of the first urban cities, with about 3000 inhabitants, and all of a sudden the whole community collapsed. Maybe it’s also interesting that the archeological site was also closed suddenly and brought back to a landscape where it appeared as if nothing had happened.

RB: Yes, it’s not clear why but at the certain point the settlement was abandoned as you mentioned; the population spread some theories saying reaching till Europe. I thought about this when I started seeing the archeologists leaving the site and flying to various destinations in the world. It’s an end and a beginning as the collected experience and knowledge will spread to and change other places.

IG: You were just mentioning Ian Hodder's concept of building up a living community of archaeologists, anthropologists, scientists and local actors who experimented with decentralised project management teams, self-reflective and diarist reporting, co-authorship and data sharing. This is also mirrored within the film. Could this idea of working within a community also be true for a vivid and innovative community in general?

RB: Absolutely. My interest was not in the archeology in itself but in this ideological approach, an incredible experiment of a society on a smaller scale. I find it important to say that all Çatalhöyük archeological data are made available for the world online as creative commons. The idea of community, that starts with that Neolithic ‘web of relationships’, is consciously expanded.

The exhibition is kindly supported by the Mondriaan Fund. The City is produced in cooperation with Protocinema, Istanbul.

During Rossella Biscotti's exhibition the two solo exhibitions by Naama Tsabar and Rochelle Feinstein were also on display.