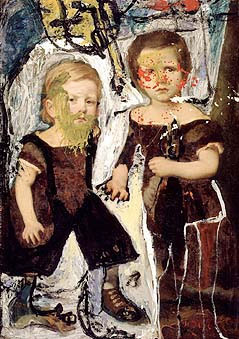 In the beginning, I misunderstood his nature as confused and inconsistent. I was mistaken. He knew how to curb the confusion. The abundance of his projects frightened me: taking pictures of graffiti on the walls of Normandy churches dating from Viking times, studying the Migration Period, establishing a collection for the Silkeborg Museum, producing a film in Munich, carrying out major ceramic works in Albisola, Italy, being involved in the Situationist movement, and dedicating himself to all the publications linked with this and other initiatives. Yet, to my big surprise, he pursued and realized all these things without appearing to be overworked. He was entirely in his element when he had more than one iron in the fire, traveling from one country to another, with intensive periods of painting in between.

There is probably no better description of the Danish artist Asger Jorn (1914–1973) than that by his colleague Jean Dubuffet. Always en route and concerned with the permanent extension of his artistic activities, Jorn led a restless life which was quite consistent in its apparent aimlessness. It is this diversity which may be regarded as a leitmotif of his work. It spans from Jorn’s commitment to the Danish magazine "Helhesten" in the early 1940s to the foundation of the Scandinavian Institute for Comparative Vandalism (dedicated to the study of folk art, especially that of the Vikings).
Asger Jorn had studied painting with Fernand Léger in Paris and succeeded in establishing himself in the international arena in the mid-fifties. He presented his work at the "documenta" in 1959 and 1964. But Jorn was also a writer and initiated various artistic and political movements. He was one of the originators of COBRA, founder of the International Movement for an Imaginist Bauhaus, and the intellectual protagonist of the Situationist International.
Besides outstanding examples of his painting, the exhibition curated by Erik Steffensen for the BAWAG Foundation presents a selection of his works produced between 1939 and 1972: from his early prints to his late bronze sculptures. The survey focuses, among other things, on Jorn’s "Défigurations" from 1962, pictures by anonymous painters Jorn bought at flea markets and painted over. It is not only the experimental approach characterizing these works that makes Asger Jorn’s oeuvre relevant for present-day art.