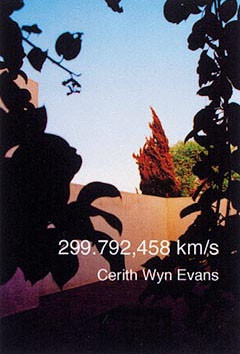 His house in Tacubaya, Mexico City, glows in pink and terracotta: the architect is a synoptist who combines regionalism and modernity with art and philosophy in an incomparable manner. He is a model of distinguished discretion. He has two obsessions: shoes and records.

The Curves of the Needle is the title of an artist book (BAWAG FOUNDATION EDITION, vol. 5) and a slideshow which will be in the center of the exhibition 299.792,458 km/s by Cerith Wyn Evans. Born in 1958, the Welsh artist, who became known as a filmmaker, directed music videos, and worked with Derek Jarman for many years, is primarily interested in emotional processes and reflections on programmatic moments of cultural history. All of Wyn Evans's precisely structured works also pay homage to the guilty chief witnesses of intellectual strictness and relentlessness - to William Blake, Pier Paolo Pasolini, Brian Gysin, Guy Debord, and the likes of them.

The architect Luis Barragán collected hundreds of records. Cerith Wyn Evans played these records on the old gramophones to be found everywhere in the Casa Barragán, the architect's former home, which has been included in the UNESCO World Heritage List. The recordings were Wyn Evans's contribution to the legendary exhibition "The Air is Blue," a made-to-measure project as regards the genius loci for which curator Hans Ulrich Obrist assembled a handpicked group of artists in 2003. Interlocking his materials, Wyn Evans has created an audio-visual meditation for his exhibition in the BAWAG FOUNDATION. A tape with selected tracks, again and again mixed with the ambient sound of the house, is played back to accompany a series of pictures for which Cerith Wyn Evans has photographed motifs in Barragán's residence, studio, and garden - a complex image-sound arrangement and parallel narration about the art of listening. Cerith Wyn Evans carefully unfolds one story on top of another and, with Theodor W. Adorno, who is quoted in the title, relates to the historical level of music during the beginnings of its technical reproducibility.

Equally fascinated by the ephemeral and the paradoxical, the artist will also include one his most famous works in his presentation at the BAWAG FOUNDATION: "Inverse, Reverse, Perverse," a concave mirror, which reflects the viewers upside down, distorts them, relativizes their physical presence; and a neon sculpture which takes the speed of light literally - language is definitely of crucial importance here: a huge, blinking Murano chandelier in the foyer sends texts from John Cage's "M. Writings '67-'72" in Morse. Wyn Evans relies on a redundant communication technology to encode Cage's notes. They are transmitted into urban space day and night. Only a few will decode these messages; for the rest, they will remain hidden in the sea of lights formed by the city. (Brigitte Huck)
www.bawag-foundation.at