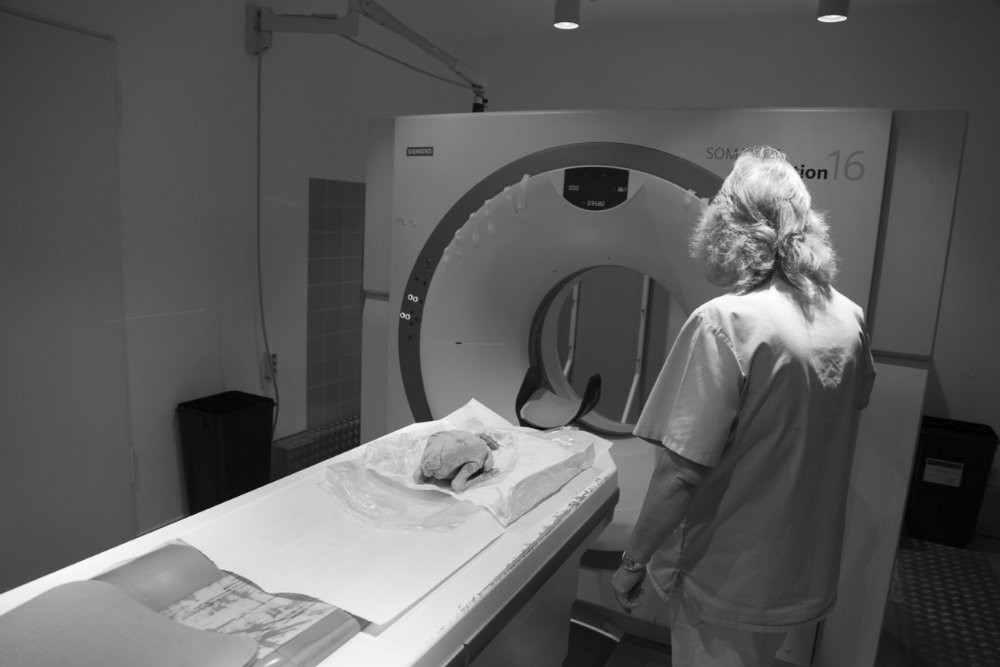 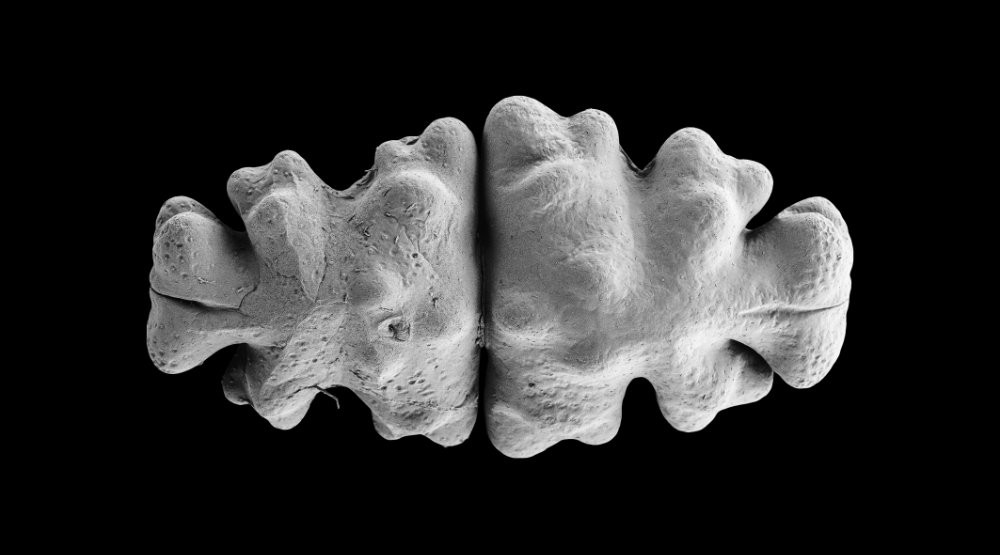 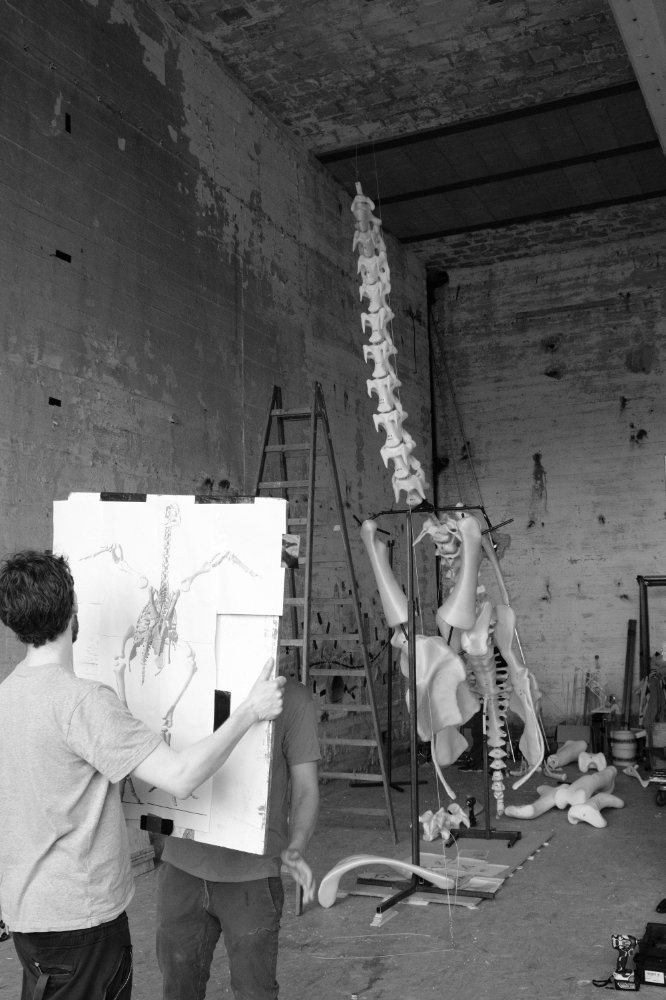 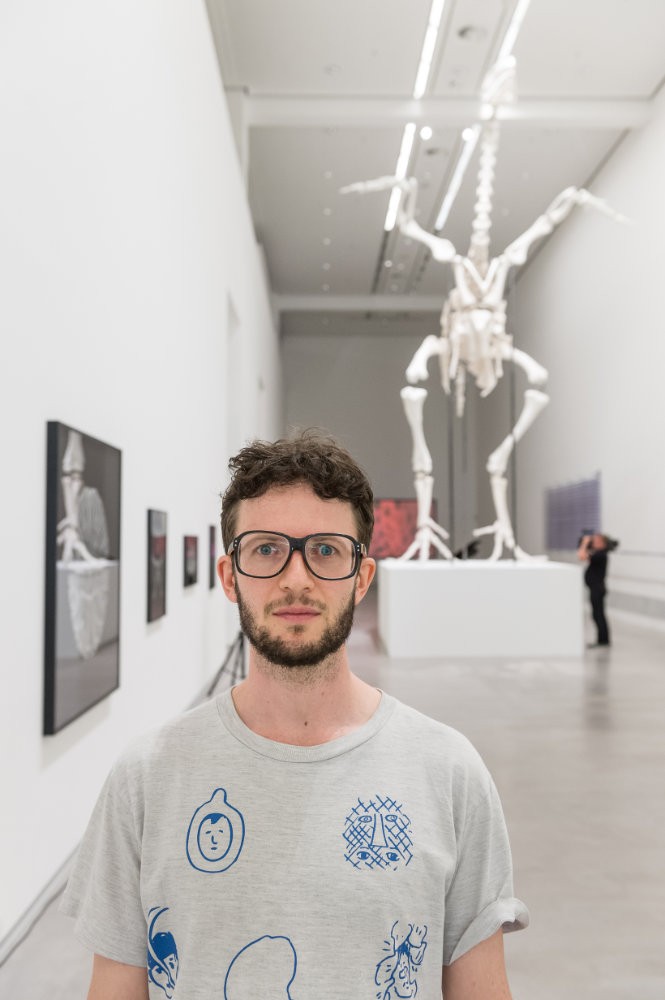 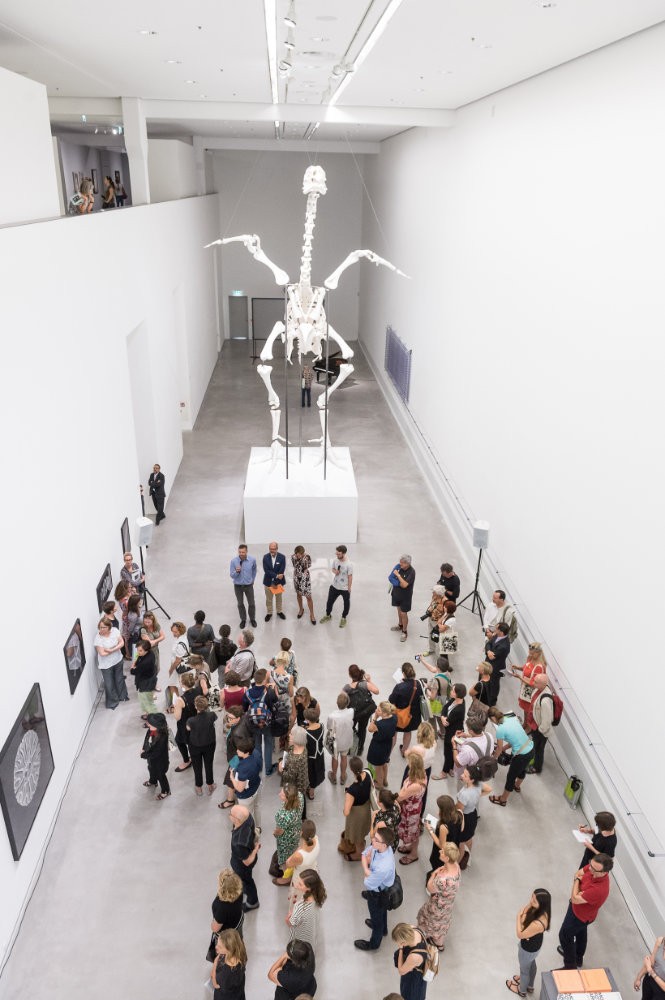 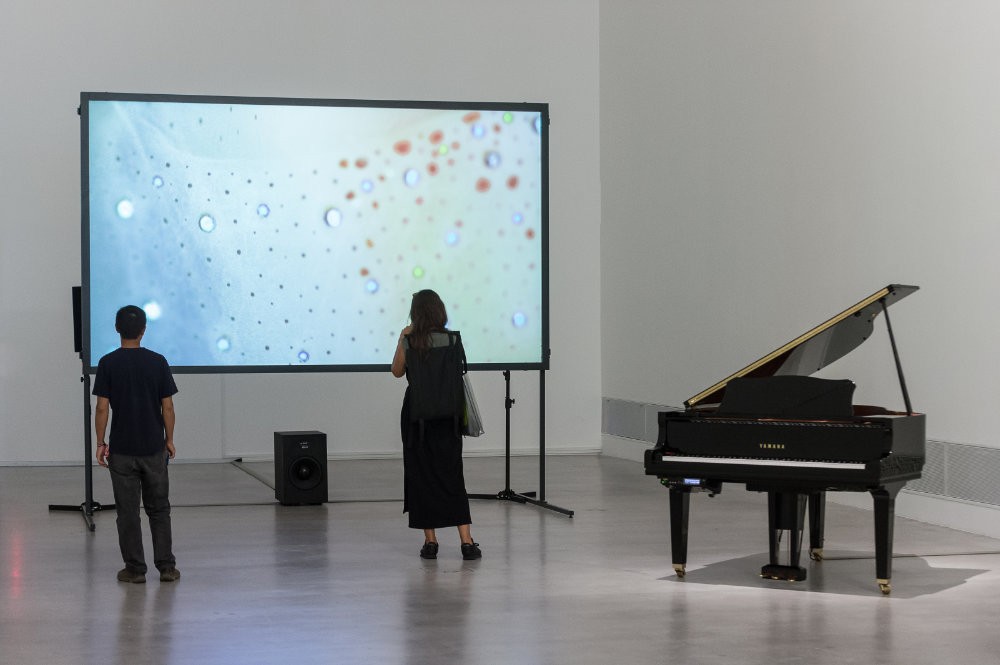 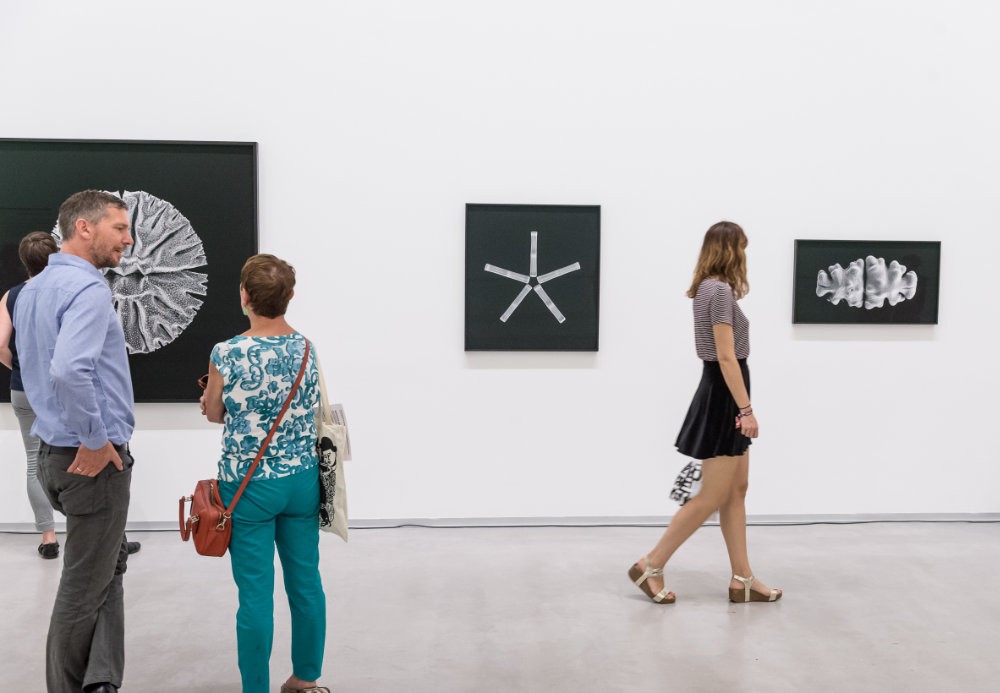 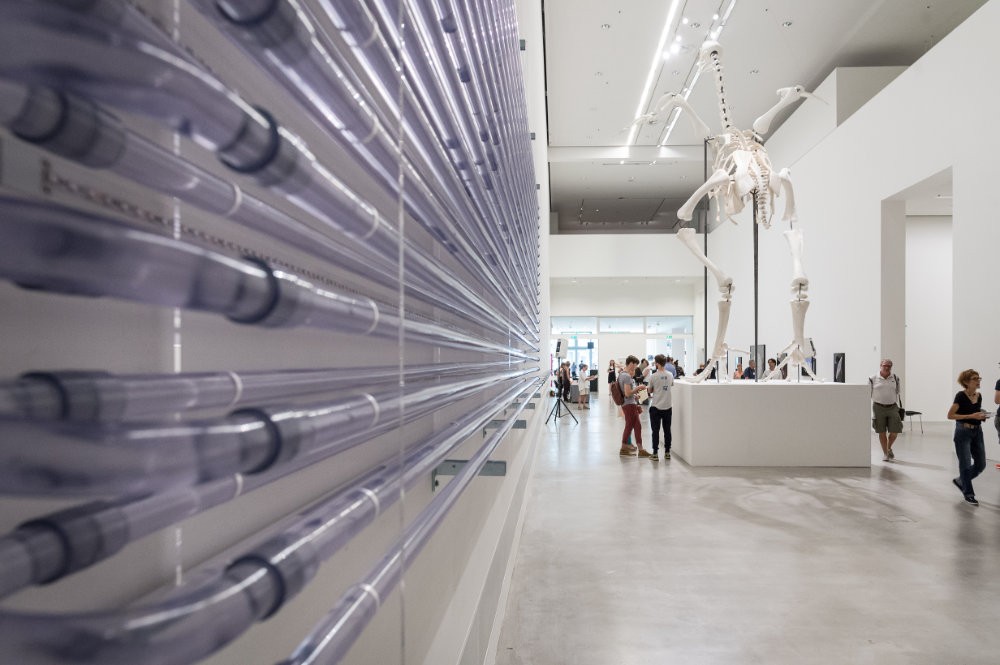 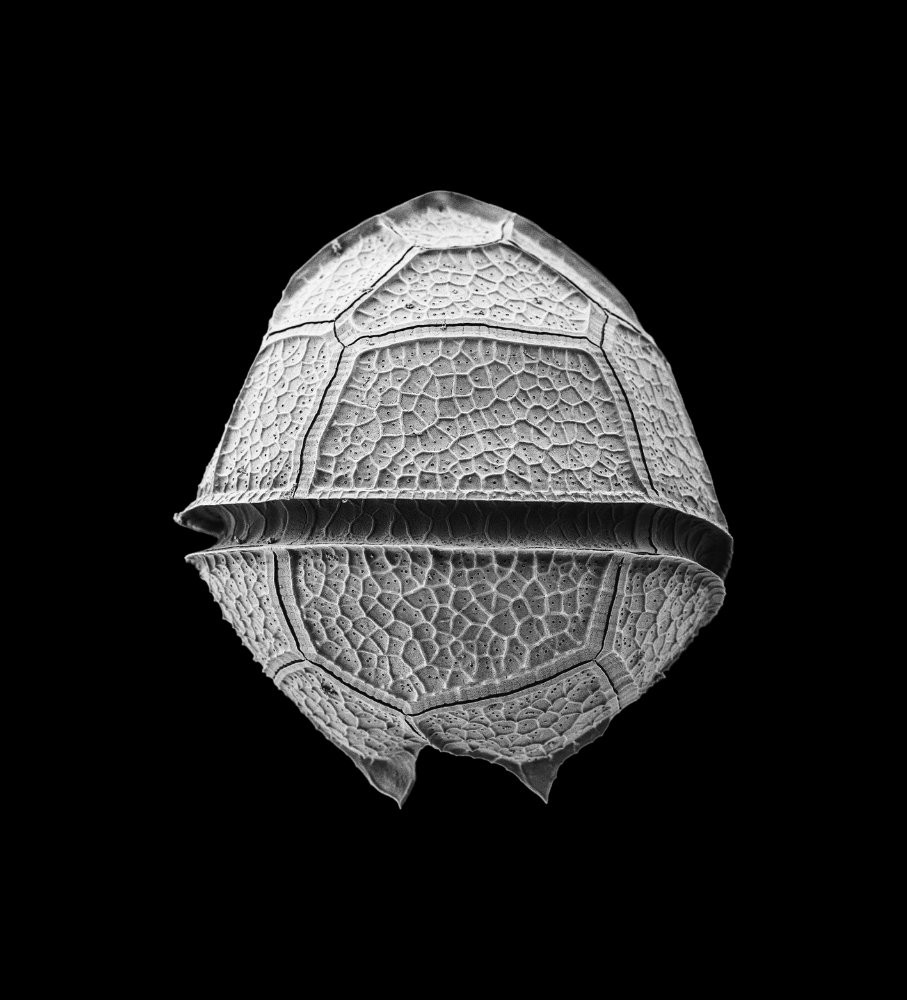 Andreas Greiner’s exhibition "Agency of the Exponent" is about the identity and transformation of living beings. It begins with photographs of organisms not normally perceived as individuals. Apart from a portrait of the broiler Heinrich, there is a series of photographs depicting prepared microalgae. The sculptural object in the middle is the Monument for the 308. It is a monumental skeleton of an animal, produced with a 3D printer, and it reminds us of a dinosaur skeleton in a natural science museum because of its size and the way it has been presented. At the far end of the exhibition, we find video footage of the skin of a squid reflected in sound by a self- playing piano (disklavier).

The concept of agency in the title transposes the exhibition from the sphere of art into a world of service providers and intermediaries. An agency has the task of respresenting its partners’ interests, presenting them in the best light and finding them a role in new settings. Rather than displaying items, the exhibition might be read as a presentation platform for the living beings on show here. Their depiction as individuals singles them out from the anonymous mass and highlights them as autonomous entities of complex beauty.

With this exhibition concept, Andreas Greiner has above all created a new mental space, enabling us to build a new relationship with our environment and its natural inhabitants. This transformation of the way we see what is shown is not a utopian reinterpretation, but primarily a refusal to adopt that anthropocentric vision which attributes value to natural beings entirely on the basis of the benefits they bring for humans. Thus they are not exhibits but exponents, not objects of contemplation but distinctive subjects, with whom the viewer can bond emotionally.

Andreas Greiner (*1979 Aachen) studied in Olafur Eliasson’s master class at Berlin’s University of the Arts, where he also graduated from the Institute for Spatial Experiments. The artist lives and works in Berlin. He has been awarded this year’s GASAG Art Prize. Granted biennially since 2010 in partnership with the Berlinische Galerie, this prize honours an outstanding artist at the interface between art, science and technology.

In 2016 the art prize initiated by GASAG will be awarded for the fourth time in partnership with the Berlinische Galerie. Every two years, the partners take this opportunity to honour outstanding work at the interface between art, science and technology. The previous winners were: Susanne Kriemann (2010), Tue Greenfort (2012) and Nik Nowak (2014). The award includes an exhibition at the Berlinische Galerie and a catalogue (published by Kerber Verlag).

The exhibition is part of Berlin Art Week 2016