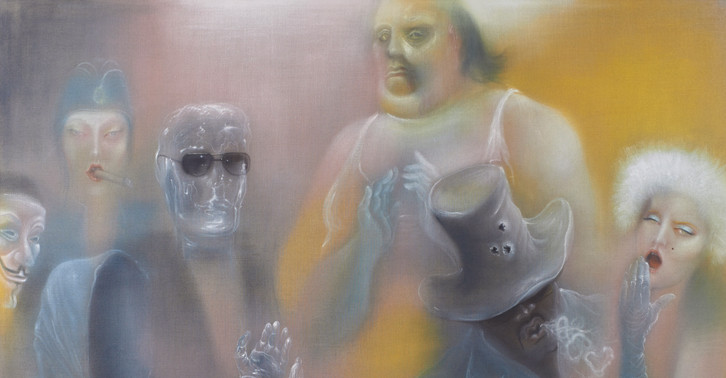 The Fred Thieler Prize for Painting in 2015 has been awarded to Bernhard Martin. The artist, born in Hanover in 1966, has been honoured for an approach to the medium that is both conceptual and narrative.

His extravagant pictorial narratives, often produced as a series, do not uphold a specific personal style, but always seek visual resources appropriate to the theme. His paintings repeatedly allude to artists of the past, whether masters of the Renaissance, Pablo Picasso or Francis Bacon. Enriched by apparent fragments of reality, Bernhard Martin’s works present an unfathomable universe constructed from bizarre content and style. These are self-generated systems where the figures operate and interact in isolation from common values and conventions.

Since 1992 the prize worth € 10,000 has been awarded every year (since 2007 every two years) on 17 March, Fred Thieler’s birthday. The old master of informality (1916–1999) dedicated the award to “outstanding painters whose artistic development is not yet complete and who have earned public recognition”. In this spirit, the jury distinguishes artists whose life and work are centred in Germany but whose work enjoys an international reputation independently of the current market for contemporary art. The prize is combined with an exhibition at the Berlinische Galerie and publication of the laudation in a commemorative volume. The exhibition and the award ceremony will be held in 2015 after the Berlinische Galerie re-opens in spring.