From the Collection: KP Brehmer Diagrammatic and cartographic works 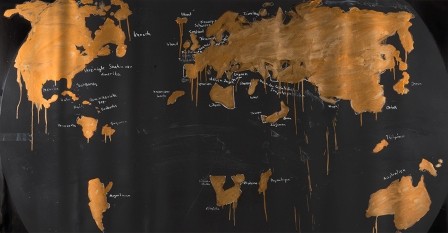 The Berlin painter, graphic artist and filmmaker KP Brehmer (1938–1997) soon made visualising socio-political processes a focal concern of his work. In the 1960s, under the influence of Fluxus and Pop Art, he turned his attention to daily life and the growing presence of the media in Western consumerist society. His early works qualify as examples of the so called “capitalist realism”.


In subsequent years Brehmer cultivated his diagrammatic and cartographic work. He would take data and maps found in books or magazines and transform them – sometimes subtly, sometimes severely – into paintings or prints. With carefully chosen touches, Brehmer thwarts the flow of information from illustrations and maps designed to convey their message directly. In “Die ausreichend versorgten Gebiete der Welt” [“Regions of the world with adequate provisions”], for example, he erases an entire continent. He highlights the potential power of scientific visualisations by applying similar selection and generalisation techniques to data and thereby subverting it. In his infographics, maps and statistics, Brehmer exposes the ways in which scientific illustrations, commonly seen as “objective evidence”, can manipulate data.


This KP Brehmer presentation drawn from our collection has been put together by the Berlinische Galerie’s trainee curators Anne Bitterwolf, Clemens Klöckner, Christina Korzen and Isabelle Lindermann.
www.berlinischegalerie.de