Henning Bohl. Works from the Collection of Berlinische Galerie 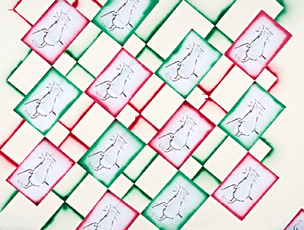 Henning Bohl, Doppelte Katzen, 2003, (c) Henning Bohl, Foto: Kai-Annett Becker
Works by Henning Bohl rarely stand alone. They are usually clustered around a common theme to create arrangements. Literary snippets and extracts from artistic biographies are so inextricably combined with stylistic quotes and cited motifs that they are hard to disentangle. To this inexhaustible reservoir of existing forms Henning Bohl adds that minimal touch of his own, generating new, surprising elements and consciously defying any overhasty decoding or clear-cut attributions.

The paintings, collages and staged objects in this exhibition were made between 2003 and 2006. They constitute a body of work that has been held in the Berlinische Galerie collection since 2011 and is now being shown for the first time in this form, conceived together with the artist.


Henning Bohl was born in Oldenburg in 1975. From 1997 to 2000 he studied at the Kunsthochschule in Kassel and from 2000 to 2004 under Thomas Bayrle at the Städelschule in Frankfurt am Main.
www.berlinischegalerie.de