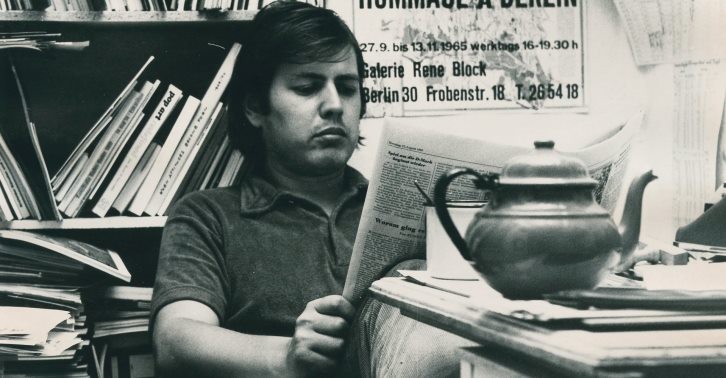 Neuer Berliner Kunstverein, in partnership with Berlinische Galerie and Lentos Kunstmuseum in Linz, has been dedicating a show to the manifold and interdisciplinary work of gallery owner, publisher and exhibition organizer René Block (b. 1942).

Block’s career began in 1964 in West Berlin, where he opened his gallery with the legendary show “Neodada, Pop, Décollage, Kapitalistischer Realismus”, presenting at the time unknown artists such as Gerhard Richter, Sigmar Polke, Joseph Beuys, Nam June Paik or Wolf Vostell. Being one of the pioneers to promote intermedia art, Fluxus and happenings, René Block played a decisive role in Berlin’s awakening to the contemporary, which in the isolated and divided city could only evolve with delay. Block’s continuous work with his artists comprised the publication of portfolios with prints and multiples, the organization of concerts and performances right up to the opening of a branch in New York in 1974 with the spectacular action “I like America and America likes me” by Joseph Beuys.

At the center of the show at Berlinische Galerie has been Block’s archive, 1964 –
2014, with material, documents and photographs of selected exhibitions, combined with selected works from the René Block Collection.

At the same time, Neuer Berliner Kunstverein has been presented favorite pieces and works from René Block’s curatorship since 1964. As head of the DAAD, the ifa Institute, the Fridericianum museum, the Kunstraum tanas and also as the initiator and head of many biennials around the world, Block has written a unique story of discovering, showing, collecting and exhibiting modern art.

The exhibition has been accompanied by an extensive publication with the collected texts by René Block and a detailed chronology. It was edited by Marius Babias, Birgit Eusterschulte and Stella Rollig, published by Verlag der Buchhandlung Walther König, Cologne (540 pages with numerous illustrations, 39,80 Euro).
www.berlinischegalerie.de