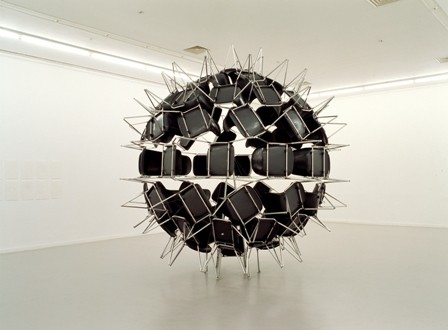 The Berlinische Galerie is showing a comprehensive thematic exhibition on Berlin’s contemporary international art scene, entitled NEW HOME - BERLIN CONTEMPORARY. Locating the individual in a world shaped by mobility and migration is a present-day challenge. In an age of cultural displacement and global homelessness, the search for transnational and historically-oriented intellectual identities is more paramount than ever. Since the second half of the 20th century - especially in art - a growing debate has emerged on issues such as home country, exile, living as a stranger, and globalisation; a discussion that rejects folklorist clichés and traditional native stereotypes.
The 29 artists of diverse nationalities represented in this exhibition have developed works especially on the theme; other works were produced in recent years, or they are being shown for the first time here in Berlin.
"Home" is not tied to a specific territory. As one of the most important locations of contemporary art production world-wide and a creative melting-pot of international artists, functions in an exemplary way within the exhibition context, as a prominent platform for the determining of artistic and cultural identity.
The artistic positions presented in the exhibition are not concerned with a visual representation of their NEW HOME, but – above all on the basis of the four emphases Architecture, Nature, Things and Mobility – they aim to bring across an intellectual and sensual-metaphorical relation to their own individual concepts of “home”, using every conceivable medium.

Architecture
The wealth of installations in the exhibition makes clear how much the understanding of home is bound up with a dwelling place in the broadest possible sense. As something constructed and inhabited, the home is a place of refuge and a mediator between the internal and external worlds. Here, the search for new forms of provisional occupancy and territoralisation, as well as an artistic definition of living space, can be found to the same extent as a deep-seated discomfort in the face of contemporary architecture.

Nature
Home is often directly associated with a specific landscape, as a longed-for place of harmony. This idyll – i.e. the emotionalising of “beautiful nature” - implies a transfigured notion of the unspoiled and a lost paradise. An increasing sense of threat and fundamental homelessness arises from the loss of nature and man’s alienation from it, brought about by civilisation.

Things
Home also emerges in our interaction with the everyday things that we make our own, which then become symbols of our individual lives. In their familiarity, these things become a cipher of our existence as we live it and enable self-reference on the basis of the concrete object.

Mobility
In an age of economic and cultural globalisation and its imperative to flexibility, the question of individual identity is raised all the more. The nomadic existence is experienced in a state of motion, and one’s own finiteness and lack of domicile is reflected in the motif of migration. Home is now beginning to appear more of a utopia.

The exhibition integrates also three artists from this year’s GASAG Art Award, which will be given by the GASAG in cooperation with the Kunstfabrik am Flutgraben e.V.