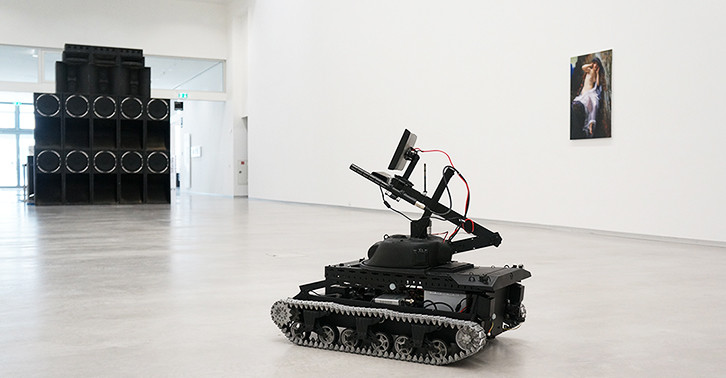 Nik Nowak, Installation Shot, Echo, GASAG Kunstpreis 2014, © Nik Nowak
Nik Nowak (*1981 Mainz) has been awarded the GASAG Kunstpreis 2014. The sound installation "Echo", which he has developed for the Berlinische Galerie, actively involves visitors to the museum. It explores shifts in the meaning of private and public in an age when digital networking is all around us. An artistic deployment of autonomous robot drones raises questions about the implications of new technologies and the cross-overs between day-to-day and military applications.

Nik Nowak's projects investigate strategies for filling space acoustically. At Berlinische Galerie he has continued his work with sound objects and experimental compositions. The exhibition "Echo" shows drones, sound systems, and a space in which there is simply no longer any echo. The concept reflects his enduring interest in technology, but also in performance, music, and the subversive connotations of sounds. Autonomous mobile sound objects – so-called "Echo-Drones" – interact with the exhibition visitors, recording their speech and playing it back in different ways.

The GASAG-Kunstpreis is being awarded in cooperation with Berlinische Galerie for the third time. Every two years, the partners use this prize to honour an artistic position at the interface between art, science and technology. Previous winners were: Susanne Kriemann (2010) and Tue Greenfort (2012).
www.berlinischegalerie.de