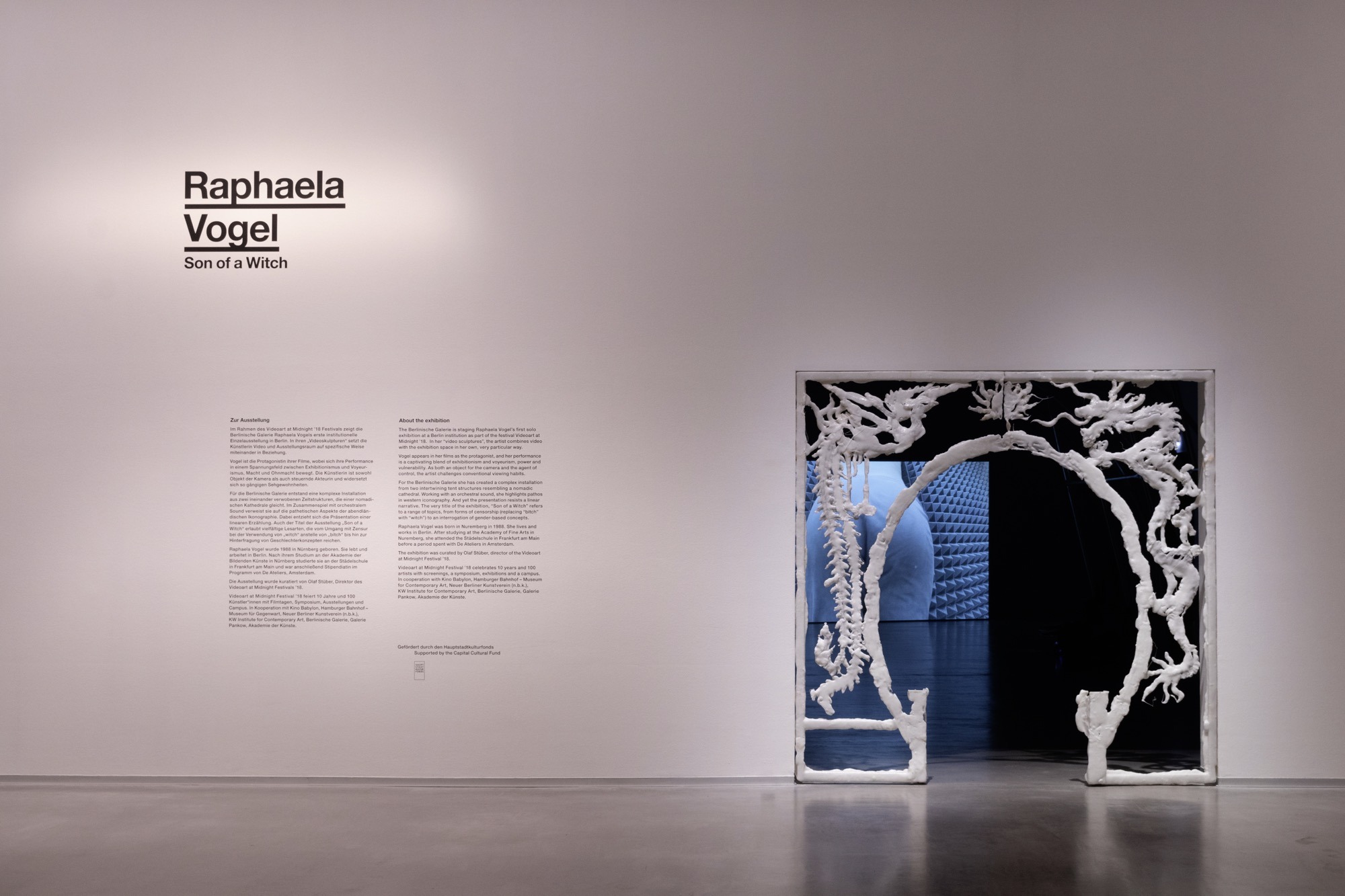 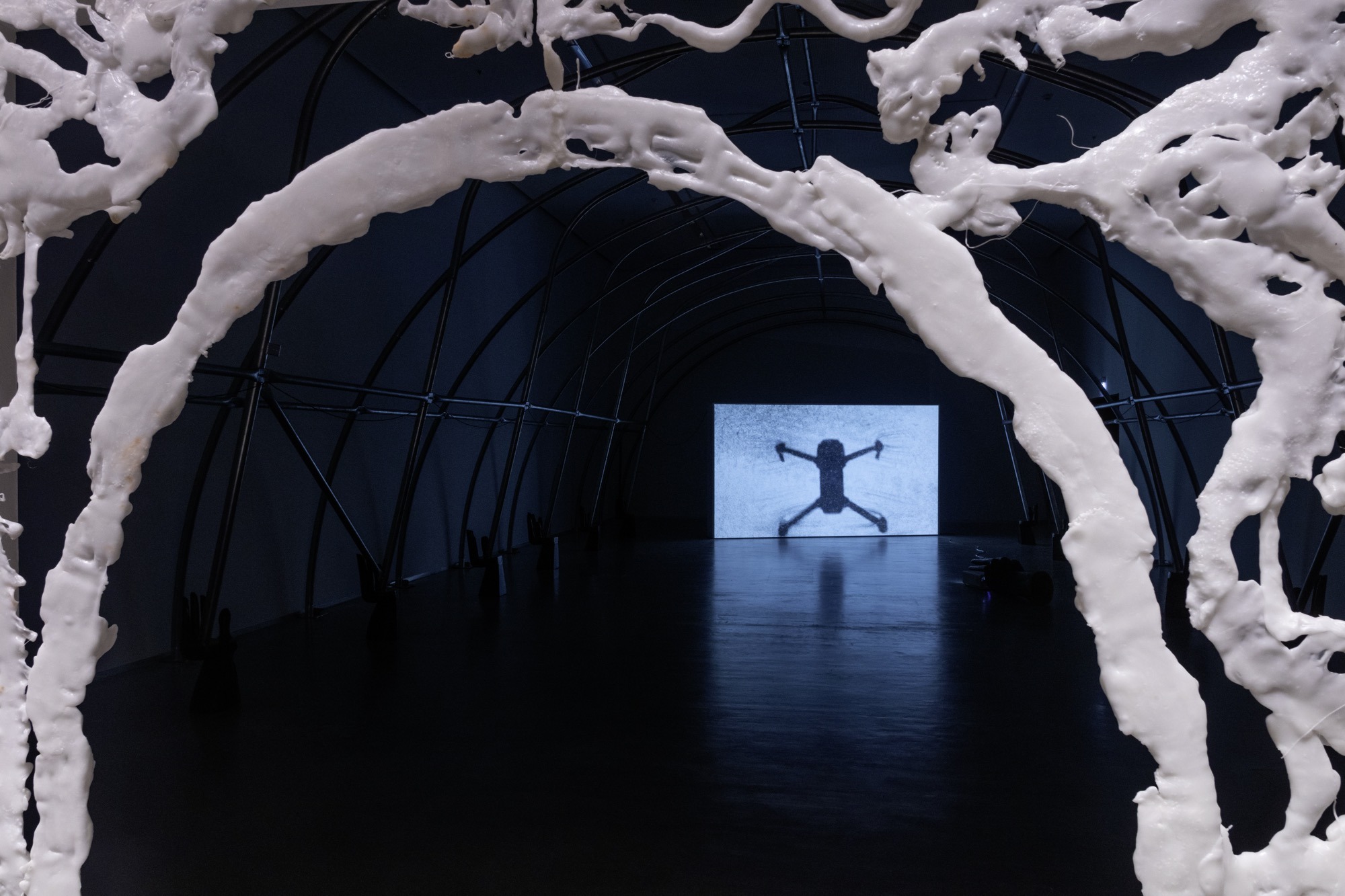 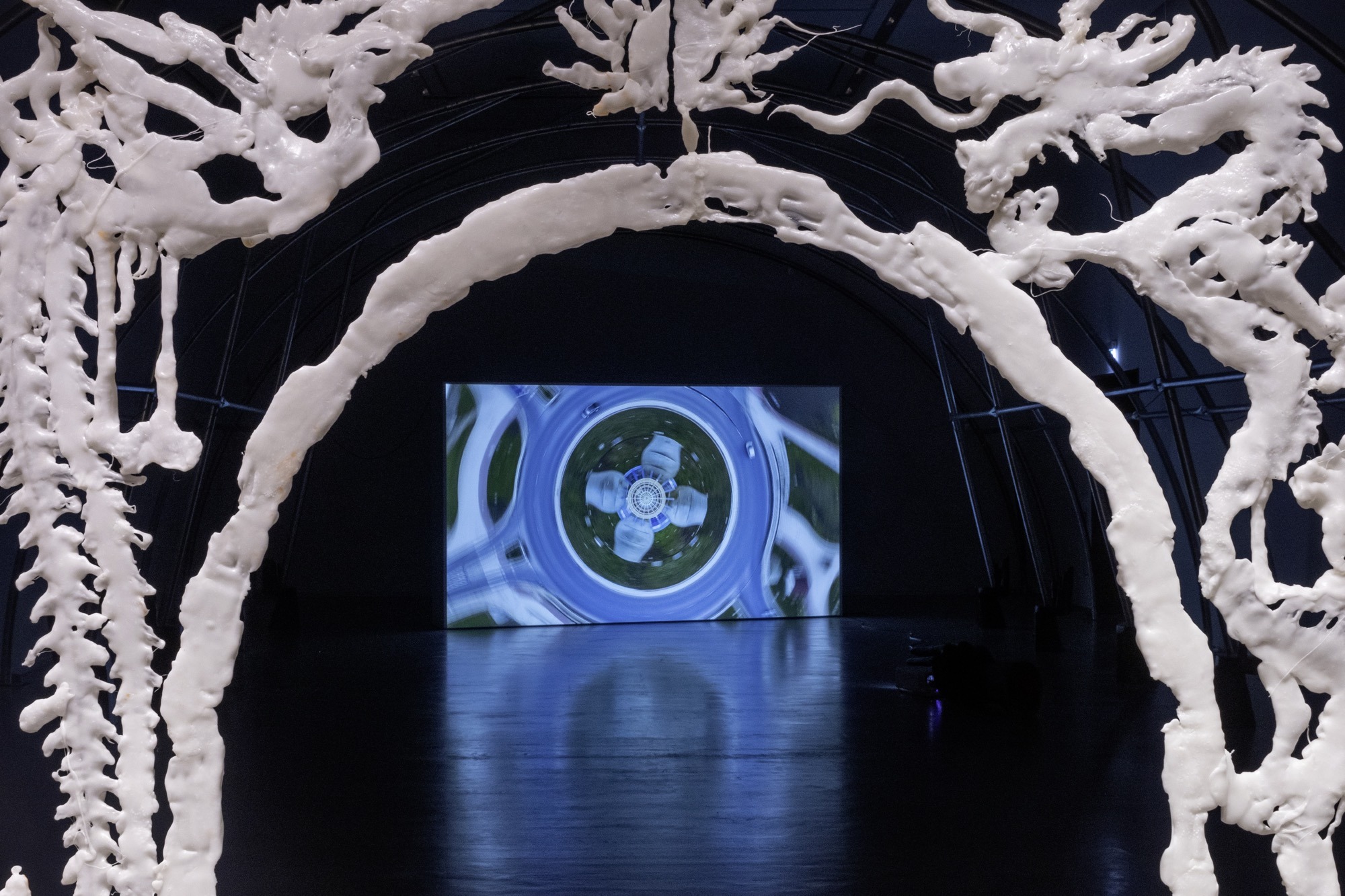 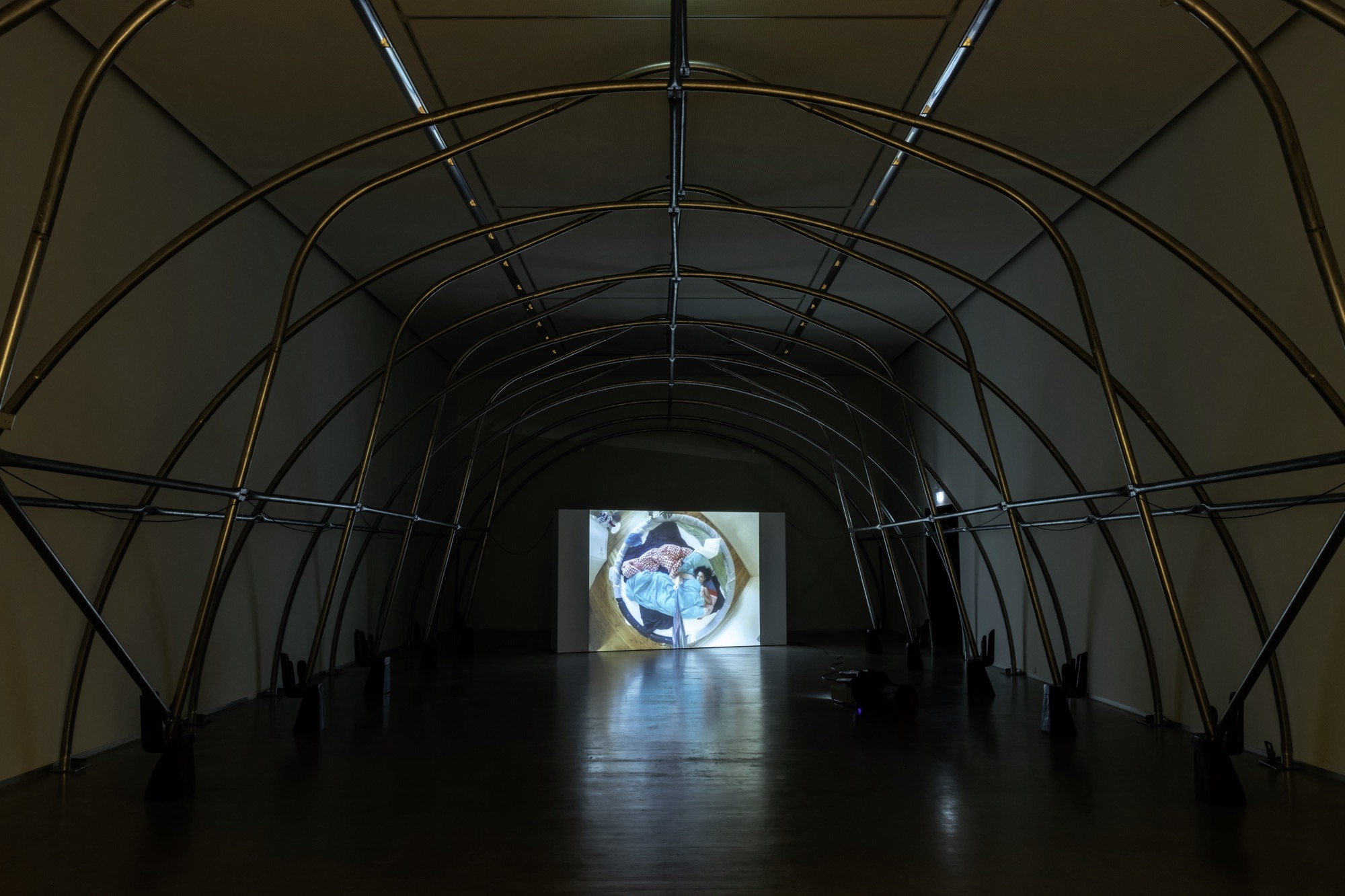 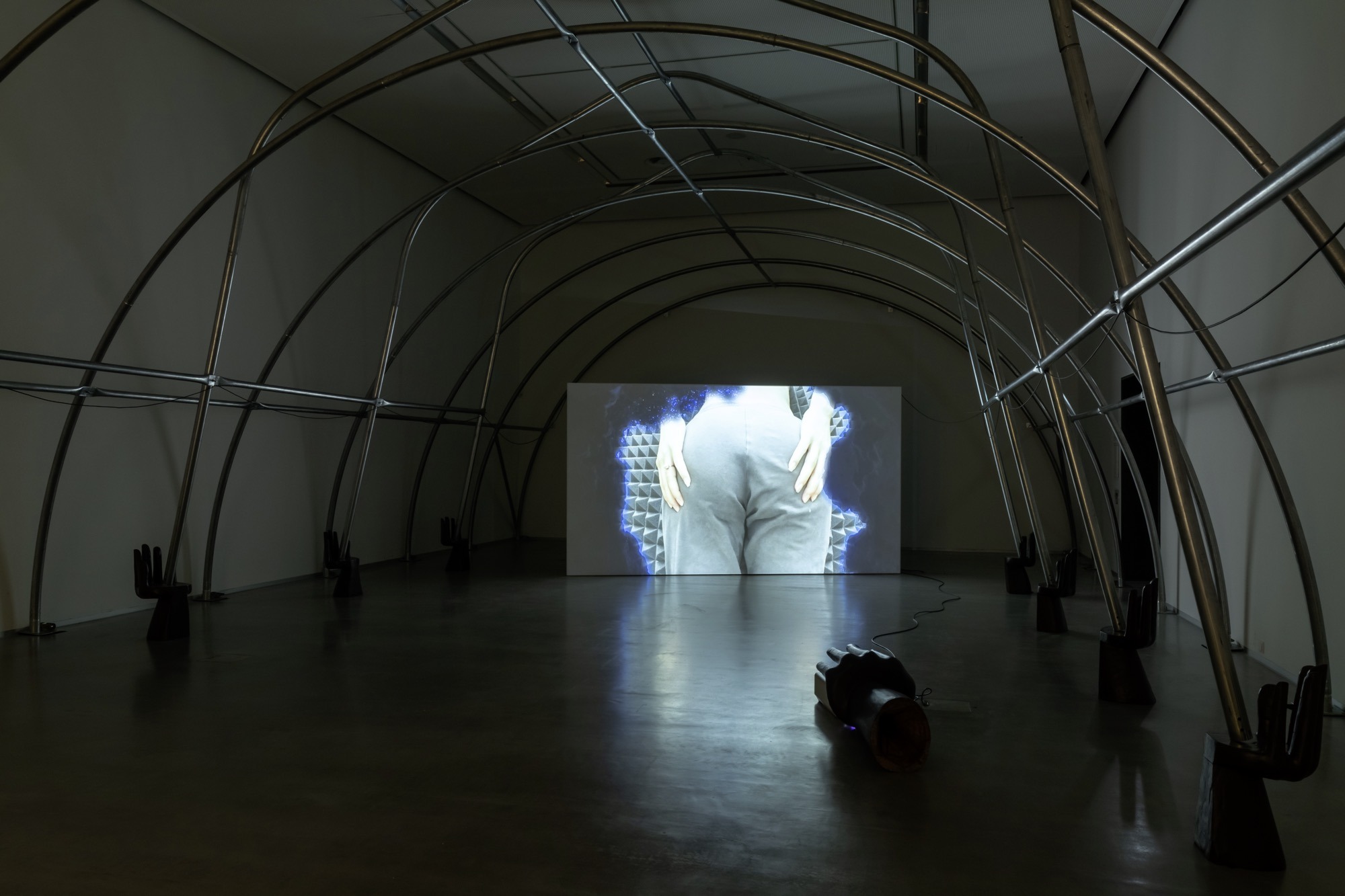 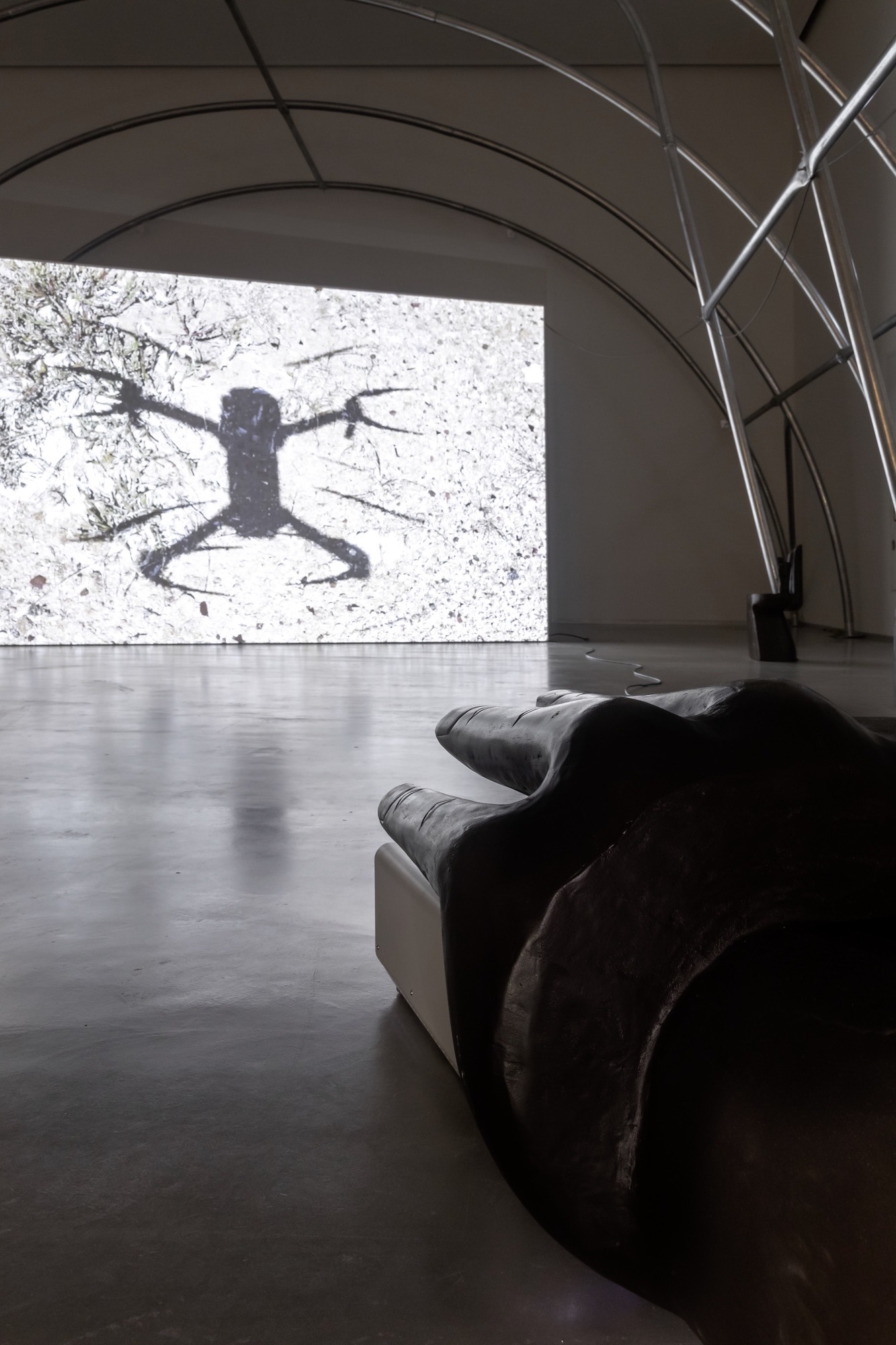 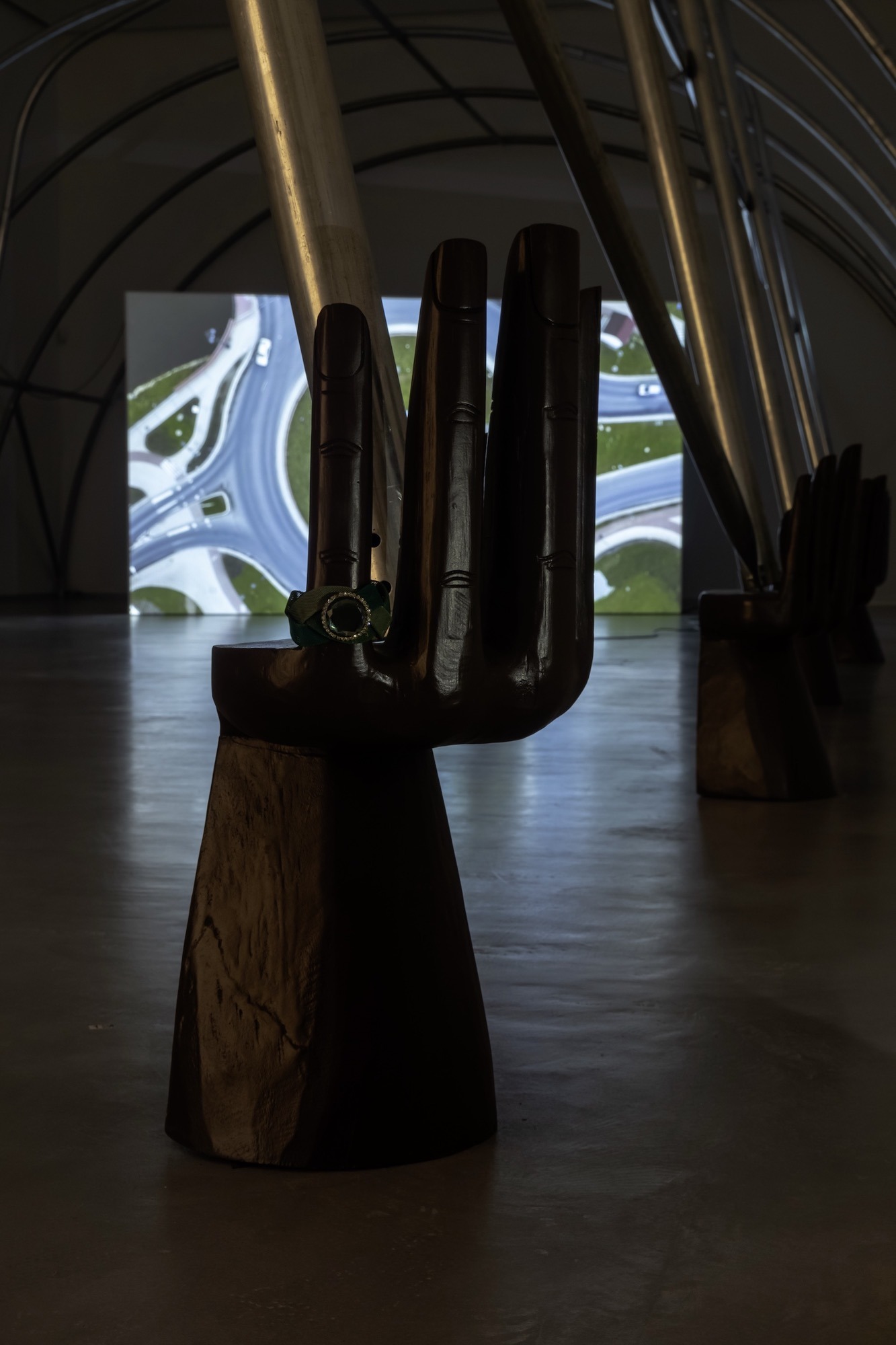 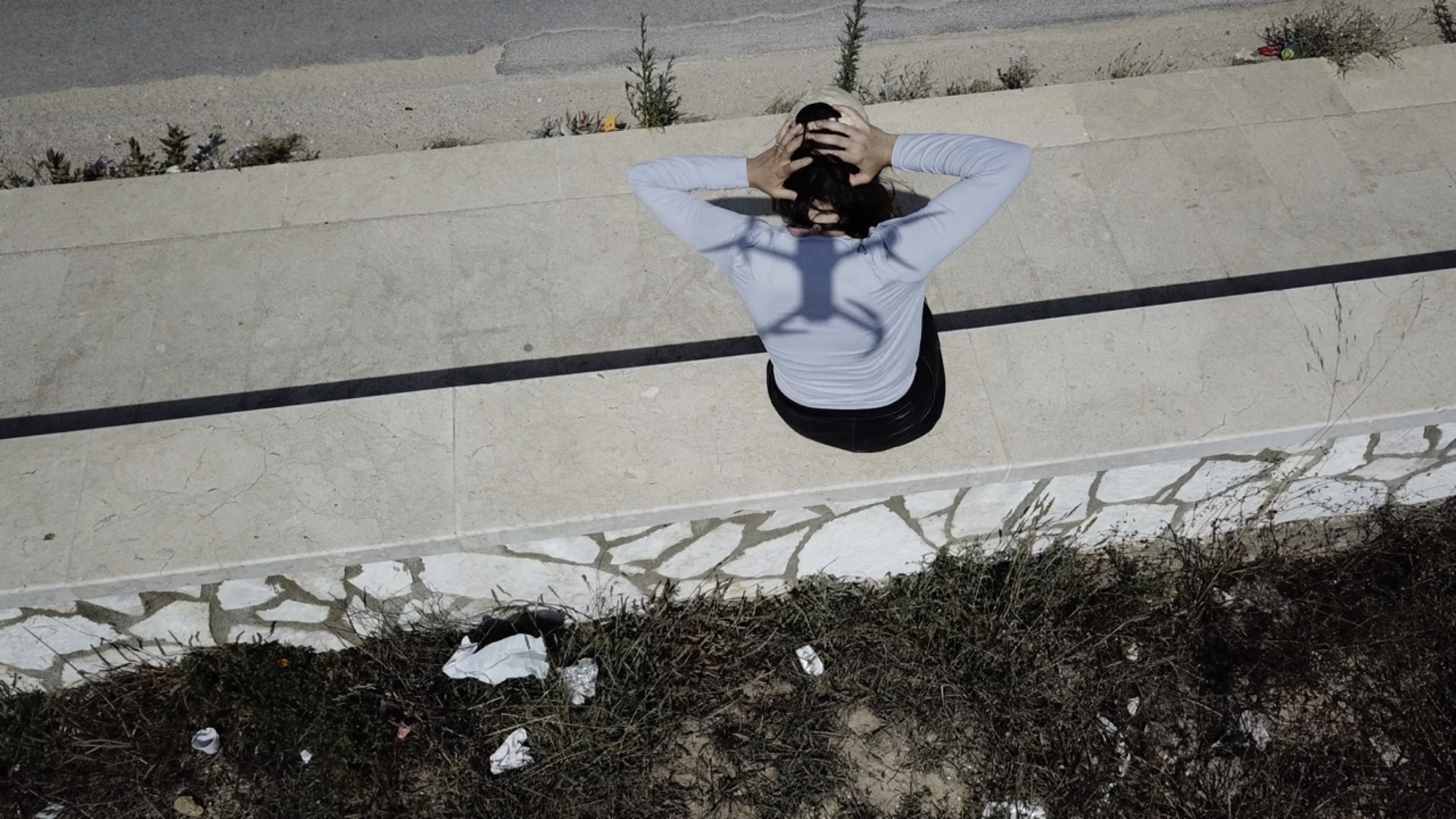 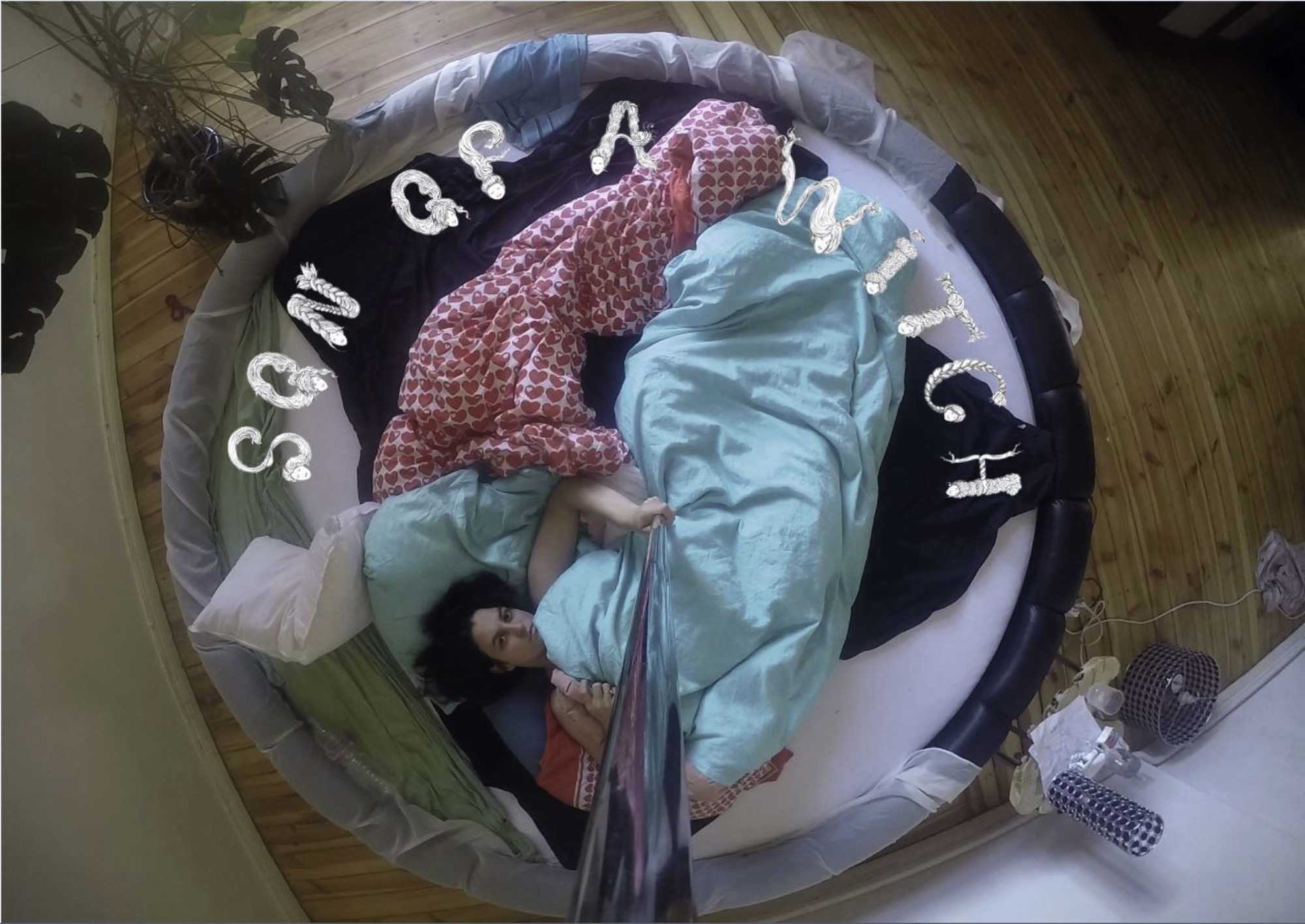 As part of the Videoart at Midnight Festival ’18, the Berlinische Galerie is showing the first institutional exhibition in Berlin by Raphaela Vogel. The artist frequently works with “video sculptures”, setting up a relationship between video and exhibition space in her own special way. For the Berlinische Galerie, Vogel has created a complex installation made of two intertwining tent structures resembling a nomadic cathedral: the temporary architecture is born by Buddhist wooden hands, which at the same time appear to be stigmata. In conjunction with the intoxifyingly orchestral sound of an adapted nocturne by Frédéric Chopin, the presentation references elements of pathos in Western iconography.

The video projected at the centre can be read metaphorically as a church clock and explores the intrinsically temporal nature of film as a medium. The clock as a motif in film history is another reference point. At the same time, by incorporating the artist and her female physicality, the work enquires from a feminist perspective who is really making the world turn as it does. Vogel is both an object for the camera and the controlling agent, resisting conventional habits of
seeing.

Vogel tackles the relationship between body, space and technology from ever new angles and not without humour in her post-apocalyptic worlds reminiscent of Frankenstein. The artist is a constant protagonist in her films, with a performance often caught up in tensions between exhibitionism and voyeurism, power and helplessness. Everything is turned on its head, reversed, transformed, deconstructed and disrespectfully reinterpreted: the Dixi pissoir, the revolving crane, high-voltage insulators, projection equipment and camera drones become weird monsters populating both the films and the exhibition space. The artist, fragile and vulnerable, takes on these uncanny beings in an apparently hopeless battle.

Raphaela Vogel was born in Nuremberg in 1988. She lives and works in Berlin. After studying at the Academy of Fine Arts in Nuremberg, she attended the Städelschule in Frankfurt am Main before a period spent with De Ateliers in Amsterdam. Her first one-woman show was in spring 2015 at the Kunstverein in Bonn, and this year she staged her first international solo presentation at the Kunsthalle in Basel.

The exhibition at the Berlinische Galerie is part of an exploration of diverse techniques, videos and artists’ films within a spatial context, alongside concurrent presentations at KW Institute for Contemporary Art and Galerie Pankow. Together with the symposium at Hamburger Bahnhof – Museum für Gegenwart, Neuer Berliner Kunstverein (n.b.k.) and the Akademie der Künste, these create the discursive framework for the Videoart at Midnight Festival ’18.

The exhibition Son of a Witch is curated by Olaf Stüber of Videoart at Midnight. It has been supported by the Capital Cultural Fund. Videoart at Midnight Festival ’18 is celebrating a 10-year history featuring 100 artists with a programme that includes films, a symposium, exhibitions and a campus. In partnership with Kino Babylon, Hamburger Bahnhof – Museum für Gegenwart, Neuer Berliner Kunstverein (n.b.k.), KW Institute for Contemporary Art, Berlinische Galerie, Galerie Pankow, Akademie der Künste.