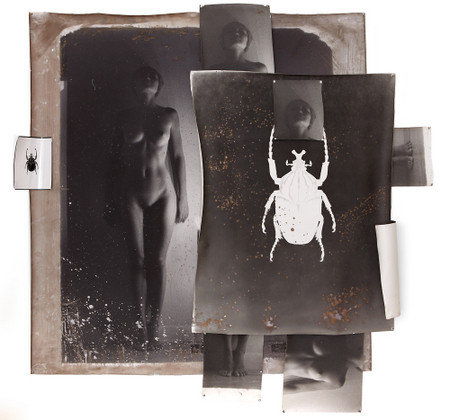 In this project Cowen uniquely collaborated for 6 months with his model Alexandra Ni, a former ballet and modern dancer of Korean and Russian descent, born in Kazakhstan in 1984. They worked in locations around Europe and the Western (Libyan) Desert in Egypt.

Cowen ́s photographic process is atypical in conventional photography. One, senses a strong influence of his early years in academic drawing and painting in his images. The artist ́s approach is not only photographic but painterly, cinematic and sculptural. Cowen uses a lengthy, complex and highly detailed production process to create his photo murals that he has developed and revised for a quarter of a century. His method and physical intervention with chemical attacks, tearing, taping, painterly traces and mark making on a thick wavy paper challenge the tradition of photography generating unique, enduring, and powerfully emotive images.

The starting point is an intensive collaboration with the model, who is actively involved in the photographic session. The final motif is purposely not overly predetermined or directed. It is his interest that the photograph subconsciously develops out of the interaction between the artist, the model, and the environment, allowing for the accidents that non-digital photography generously produce. Thus creating an organic, transcendental and lasting moment, Cowen’s main focus lies in what he calls paradoxically "the non-moment". The instant just before or just after an event. He finds that in the "non-moment" the subject of the image is no longer just the physicality of the figure but that the spirit, soul and emotional world of the model competes and often overpowers or becomes one with the physical domain. After the shooting the artist often spends several months analyzing and studying the work prints before going into the final print.

The second, crucial step takes place in the darkroom where Cowen adds the painterly and collage-like aspects by treating the paper with various chemicals and techniques during the printing process. Cowen says, “The darkroom is a place where I paint and collage, where I can bring out the interior world of the image; my nature and its relation to the image.

There is something special to me about a traditional silver print. It is hand made, not from a computer, not ones and zeros; it has a vitality and humanity of its own. I can feel the hand of the photographer in it. No print can ever be the same, not like a computer.“ This is what brings out the unique character of his works, that create their own world full of emotion and intensive expression. Sometimes, Cowen will work on one print over the course of one or two years by going back to it and reworking it until he feels the image is breathing its truth.

Jeff Cowen was born in New York in 1966. He studied Oriental Studies at the Waseda University in Tokyo and New York University as well as Anatomy and Academic drawing at the Art Students League of New York and the New York Studio School. From 1988 to 1992 he worked as an assistant to Larry Clark and Ralph Gibson, a time period that was of significant influence to him. After a longer stay in Paris, the artist moved to Berlin three years ago, where he lives and works.


Blind in one eye, forever I traveled through the desert night...

When arrived, in the darkness, an enormous Scarab*...

At the vision, of this goliath, I passed out cold.


Dawn's light. I awoke to a nymph, and her sunflower.

A mirage? A woman? A Goddess?


She pointed toward the desert's horizon, the sun and its illuminating light.

Alexandra walked, and I, no longer blind, followed her to Ra**.

*The Scarab, or the God Khepera, in Egyptian mythology, was believed to have moved the sun.

The artist will be present during the opening. Please contact the gallery for press material and further information.
www.galerieklueser.com