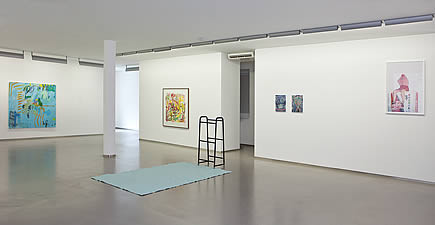 works by Ulrich Wulff, André Butzer, Gabriel Kondratiuk, Anna Kolodziejska, Patrycja German
Beginning with André Butzer’s first solo exhibition in the Tyrol in 2004, the Galerie Bernd Kugler has concentrated on internationally relevant aspects of contemporary art. The group exhibition “5 years for friends” is a display of works by those artists who have supported and played an integral part in the gallery’s programme over the past five years.

Previous exhibitions in our gallery have already seen Bara transferring sculptural installations into paintings in a similar way to the two new works on display. They tie in, on the one hand, with a sculpture which was shown in 2006 with spherical concrete heads ascending into abstraction. At the same time they represent a new set of works, with simple, monochromatic circles reminiscent of the Sephiroth of the Kabbalistic Tree of Life.

Since the end of the 1990s, André Butzer has been presenting his own mass culture so to speak, in which he has turns a set of self-created figures and characters into the protagonists of his series of paintings. In the current exhibition he displays a new, large-scale watercolour composition using vigorous red, green and yellow brushstrokes and black lines reminiscent of the abstract canvas series.

Patrycja German’s performance art consists in creating concrete situations in which the audience is invited to participate. The thrill of her art lies in the unpredictability, the range of possibilities which the interaction generates. A photo documentary of her performance shows the artist sitting motionless as a “living sculpture” for two hours, during which viewers could take drinks out of the coke machine between her legs.

Showing no particular preferences, Andreas Hofer mixes figures from Hollywood, from the world of pop music and from comics with contemporary icons or with science fiction. He confronts elements of horror from western mass media with the despised or forbidden stylistic features associated with the art of the Third Reich. The artist invents characters that not only exist amidst the strangeness of a familiar world but who, at the same time, live in an undeterminable world with no guarantee of rules, limits or security.

Thio Heinzmann’s works consist of succinct and incisive paintings. The carefully chosen and consciously positioned materials conceal an inner tension in that they appear cursory and effortlessly placed. His new work, for example, shows black pigment exploding on the otherwise quiet background of the white canvas.
Anna Kolodziejska’s more recent works, in contrast to her first solo exhibition in the gallery, are not only characterised by alienation, defunctionalisation and transformation of random everyday objects; now a narrative aspect has entered into the artist’s oeuvre. A simple flick of the wrist transforms a rack and a bedsheet painted turquoise into a swimming pool filled with clear water which surges its way across the surface of the floor.

Gabriel Kondratiuk’s brushstrokes, like the graphic layouts of the lines, emphasise the contours and details of the figures, thus creating a gentle dialogue between forms and textures, between rhythms and depths, between chromatic quality and accomplished musicality, liberating the landscape into a dimension which goes beyond the mere depiction of nature, creating an impression of slumbering apparitional faces. Their portrayal is both sensitive and nuanced, created by a gradual abstraction of paradigms of nature.

The earthy concreteness of René Luckhardt’s paintings goes hand in hand with the fantastic nature of the figures which unites them with their environment. The figures are emphasised by bold colours, and the absence of spatio-temporal coordinates leads them into absurdity. The mystical fountain of youth becomes a provocation in the face of the perception of time; there is no rational order whatsoever and, instead of in physical space, the figures appear in their own spiritual world.

In his colourful paintings (striking is the light blue, brown and green in his picture in the current exhibition), Ulrich Wulff is searching after not only existing, but also future possibilities of painting as a condition for human life and togetherness. Since his second solo exhibition in 2008, through his picture compositions and colour design, Wulff has been focussing, almost radically so, on the problems faced by abstract painting when the central figure is omitted.
www.galerie-kugler.at