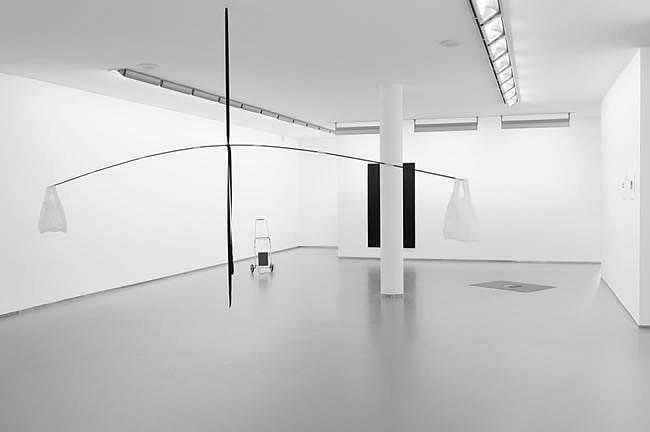 A whisper in the twilight

In a brightly lit city there are hardly any places that allow for the night to be felt.
But anyone who has once rambled through a dark forest or wandered around in an unfamiliar, badly lit area has come to know the romantic, yet also fearsome side of the dark. When all colors fade, all that remains of the world are silhouettes, and the shadows become alive.
It is this field of allusions, of shadowy figures reduced to the essential that Anna Kolodziejska’s works in her exhibition “Nocturnes” center around.
Their shapes revoked, their colors reduced to black and shades of grey, the objects and paper works merely require minor changes and shifts to unfold in a calm, poetic mood.
The light goes out and a mystical whisper in the twilight begins.

Anna Kolodziejska (born in 1976 in Zywiec/Poland, lives and works in Karlsruhe) studied at the Academy of Fine Arts in Karlsruhe, where she was a master student of Prof. Ernst Caramelle. Works by Anna Kolodziejska are included in public collections such as the Municipal Gallery of Karlsruhe, Goetz Collection/Munich, and the Collection of the Federal State of Tyrol, as well as in numerous private collections in Belgium, Germany, Austria and the USA. Solo exhibitions of Anna Kolodziejska’s works were last held at Villa Merkel/Esslingen, OT Raum für aktuelle Kunst/Lucerne, and the Municipal Gallery of Karlsruhe; shared exhibitions were held, among others, at Kunstmuseum Liechtenstein (Don’t smile), The Power Plant/Toronto (Rearview Mirror), and Kunsthalle/Wien (Parallelwelt Zirkus). Anna Kolodziejska was awarded the Enovos Prize for Young Art in 2010, as well as the 2012 Art Award by the Werner Stober Foundation.
www.galerie-kugler.at