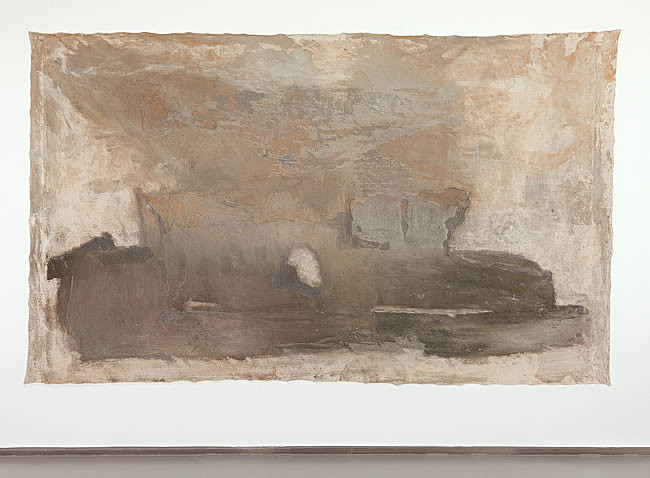 For 30 years, the art of Erwin Gross has been concerned with an analysis of the principles of landscape painting. He reviews approaches to Classicism, such as that of Joseph Anton Koch, the Romanticism of Carl Blechen or Carl Rottmann, and the High Modernism of Ernst Ludwig Kirchner, for instance, in his searching for a contemporary means of addressing Nature. Very early on, at the time of his participation in documenta 7 in 1982, Gross formulated his original approach.
Erwin Gross has further condensed his vocabulary for his second solo exhibition at the Galerie Bernd Kugler. His painting is built up of layers. A composite is created which relies rather more on reduction than it does on addition. In a multiplicity of processes, traces of colour, barely visible in their fluid aggregate or glaze form, are applied to the canvas. A taut surface is produced by stripping and wiping away, by means of dispersal, shifting between a focus now on the material, now on the subject matter to create something of a topographical nature. The floating forms which take shape, so to speak, have an elemental quality in that they are pure matter. Dampness has been so clearly captured in them, that they also give the impression of having been poured, as if there were a kind of natural compactness that could hold them in this form.
Erwin Gross realises the significance of his painting for current concerns about the ecological issues facing humanity. His images are monolithic, as if they have appeared out of nowhere in their raw state. They are the result of much deliberation, many processes and working methods. Gross’s oeuvre relies increasingly on simplicity, on a simplicity informed by the progress of civilisation and which is the product of simplification.