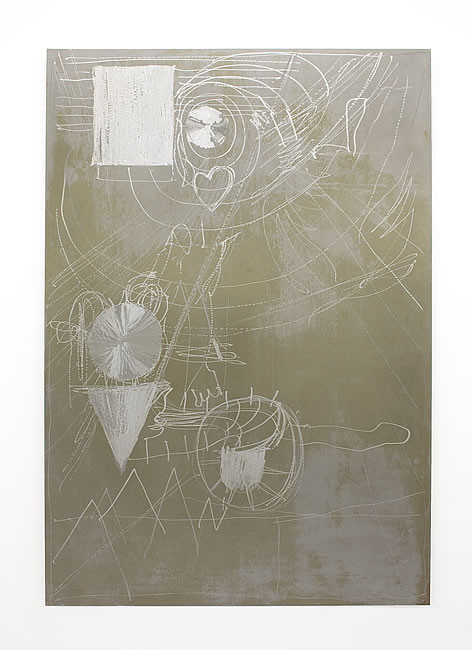 The gallery is pleased to open the fall season with a solo-exhibition of wall sculptures by the Los Angeles-based artist Hans-Peter Thomas aka Bara. The exhibition will commence on Thursday, September 13 at 6 pm with an informal listening party of “golden records” that will play in the gallery as an accompaniment to the works on view.

Thomas’s career has spanned a decade, during which he has consistently explored the possibilities for signature in the field of painting. In 2003, for his first solo exhibition in Berlin, the artist made an initial painting series which consisted of the letters of the alphabet applied to 26 canvases. Large in scale these paintings challenged the idea of “writing,” each letter painted in a manner that attempted to be free of popular style references associated with fonts and font usage.

From 2004-2011 Thomas primarily produced monochrome paintings which coupled broad stroke brushwork with scratches—paint was physically removed revealing the canvas below. The scratches or lines in these works resembled primitive mark making signs of life literally inscribed onto the painting’s surface. If in American Abstract-Expressionistic painting, areas of the canvas were left untouched or unmarked (Stella, Frankenthaler), here Thomas posited painting as a sort-of trap to break through, his gestures suggesting a desperate attempt to move through an impenetrable surface, perhaps into another field.

In 2005, Thomas did this literally, putting aside painting to produce a pop-record, Indigo (Akasha Records). Made under the pseudonym Bara, the artist treaded between two worlds of expression and multiple identities. More recent works from 2009-present have involved collaborations with musicians and actors in Hollywood, where Bara invited his collaborators to join him in the act of painting itself, each applying their signature to the painting ground.

Here for the first time Thomas exhibits his metal wall works which expand upon his interests in line, specifically its ability to be pictorial and/or indicative of the artist’s physical relationship to the object. Eight flat sheets of blue-gray steel are hung in the gallery. Each suggests the form of painting, yet here the surface is less yielding. Thomas, using brutal grinding and carving techniques has etched on each what appears to be the symbols of an ancient culture. “We are called humans. Is there anybody out there?”

Relating to the 1977 Voyager spacecraft Golden Records, phonographic records containing music and diagrammatic drawings of “proofs” of human life, Thomas’s works bear imagery which could be messages to extra terrestrials or to advanced humans. Inspired by early Renaissance diagrams of central perspective, Kabalistic drawings of the Tree of Life, Rudolph Steiner’s models of spiritual energy flows and other sources, Thomas creates his own visual language that is both familiar and abstract. His steel plates invite contemplation. Is the artist’s gesture part of the language of mystic truths? Or is it just a record of a random physical act, something private, unto itself, not meant for deciphering?
www.galerie-kugler.at