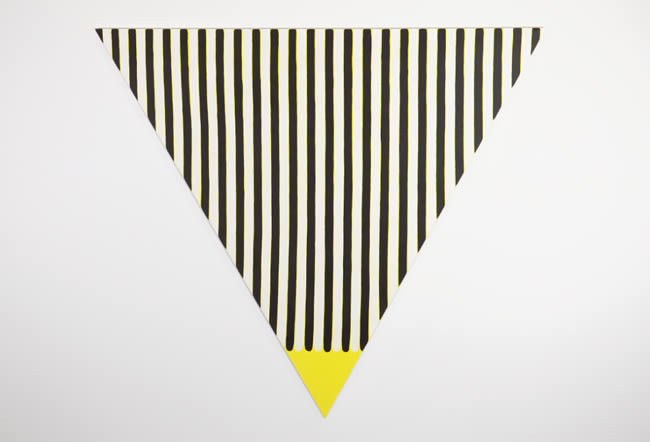 Galerie Bernd Kugler is delighted to host its fifth solo exhibition of works by Holger Endres.
GELB (yellow) - this is the title of the exhibition of new works by the artist and it represents the continuation of a series of shows, which has included Magenta Schwarz Weiß (Magenta Black White) and Coelinblau (Cerulean Blue).
Holger Endres has chosen isosceles triangles, each 205 cm wide, as supports for his new pieces. Five in all, with the apex angle pointing downwards, they appear to float against the wall. Endres has painted his black and white lines onto glowing yellow canvas. They are arrayed parallel to one another, liberating the yellow apex to such a degree that the eye perceives the yellow to be a plane. The viewer’s gaze is arrested by the structure of lines, and fails to penetrate beyond them, his/her focus alternating between both picture planes. A dance commences.
In his use of triangles, Endres takes up the idea of the Shaped Canvas, according to which form and motif mutually inform one another, something that accords entirely with his endeavour: the artist does not approach painting merely in terms of form and colouration. The carrier of the image, in this case canvas is the challenge, as the setter of the task. The triangles have concrete dimensions, calculated in response to the space in which they are exhibited.
Endres approaches the canvas as his physical counterpart. The execution of his work demands intense concentration on the here and now. This is how fleeting moments are captured so that they consolidate to form objects with an intensely powerful presence and a three-dimensional impact, which is experienced by viewers as almost physically tangible. They have been brought together for the first time in the gallery space. The way in which they are arranged produces a rhythm, which is echoed again in the juxtaposing of their titles. They represent excerpts from the artist’s process and may be read like a poem.
www.galerie-kugler.at