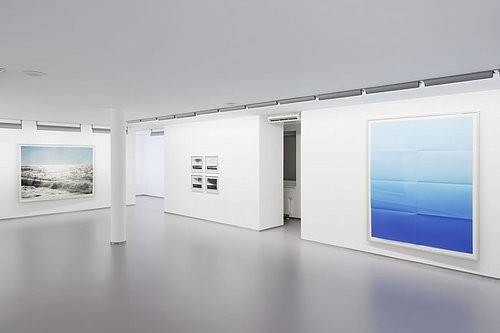 No wind plays with the swelling waves, no boat cuts through them. Nor is one obliged to believe that the Earth cannot be inhabited on its base and on its sides. Sometimes, when clouds are in the sky, the sun or the moon is reflected in the vapours, and it appears as though there are several suns or moons in the sky.
(from “The Head of Vitus Bering” by Konrad Bayer, orig. in German)

From 5 November until 10 December 2010, Galerie Bernd Kugler is presenting five perspectives on the theme Ocean in its exhibition entitled “parapluie”. On display are photographic works by the artists Dan Asher, Martin Dammann, Erwin Kneihsl and Jack Pierson, as well as a video by Christoph Brech. The piece of work bearing the closest relationship to the conventional “seascape” is that which, as far as the medium is concerned, is furthest away from it, namely the video Break by Christoph Brech: an icebreaker is seen moving across the screen — following in its expansive wake a container ship — the contours of waves, ice floes and swathes of mist blend and fuse amidst the horizontal movement. The horizontal is accentuated in a different way in the analogue photographs by Erwin Kneihsl. The quality of his photographic prints generates an unreal clarity: an amorphous line of pure white spindrift vibrates on a completely calm, black sea. In the photographic works by Dan Asher and Jack Pierson, the focus is on the blue of the sea: emphatically acute confrontations with specific elements relating to the maritime motif. A piece of work from the series of reproductions entitled Überdeutschland by Martin Dammann reflects on the medium of photography itself. The greatly enlarged historical print of an aerial photograph from the Second World War does not focus so much on depicting a naval battle. Rather, symptoms of the photographic genre are brought to the forefront: the materiality of the photographic paper, the folds, creased edges and blank spaces of which criss-cross the actual image itself. Martin Dammann’s reproduction presents an “accidental picture”. It documents traces of destruction, which Jack Pierson already hints at with the folding of his large-format pigment prints: the aging of and changes in the prints are intentionally pre-determined. Photographs are light, they can be folded up, carried about and unfolded again anytime – like a parapluie. These came into use as portable forms of rain protection at the end of the 17th century, i.e. on the eve of the European maritime powers’ great voyages of discovery. Just a morsel of information for what it’s worth!