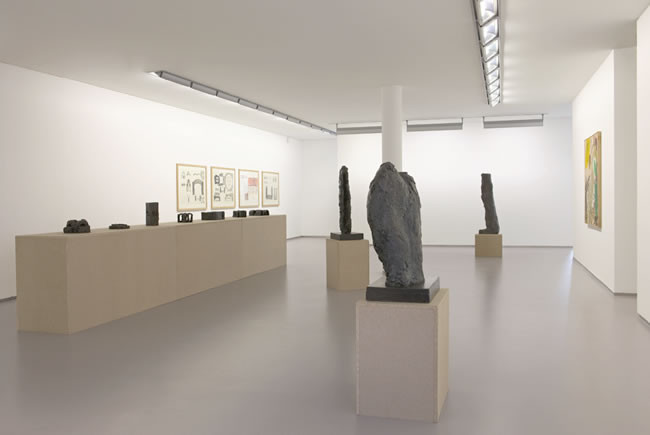 Galerie Bernd Kugler is delighted to present its third exhibition of works by Per Kirkeby in its rooms in Innsbruck. Among the exhibits are models for brick sculptures, architecture/project drawings, and bronze sculptures.

After having completed various expeditions to Greenland in the years between 1958 and 1962, Per Kirkeby joined the Experimental Art School in Copenhagen during his studies of Geology in 1962; an alternative to the Academy of Arts, considered a source of inspiration for young artists who explored pop art, happenings, minimalism and experimental film. At the same time, Per Kirkeby was also a member of the Fluxus movement (initiated by Tomas Schmit), a loosely organized international group of avant-garde artists working in a wide range of media in the 1960s and 70s and captivating the public with their artistic directness. The movement’s founder Tomas Schmit described it as “an encounter between American lack of style and European fatigue with style” or, as stated in a catalogue of the Stuttgart State Gallery, “an encounter between the American condition of having too little style and the European condition of having too much of it”. It was during that period that Per Kirkeby first met Joseph Beuys and Nam June Paik.

The year 1965 saw the creation of Kirkeby’s first brick sculptures and paintings with architectural elements on square masonite panels. It may well be that the Grundtvig's Church in Copenhagen (a monumental brick building, designed by Peder Klint and built from 1921 to 1940), in the “shadow” (vicinity) of which Kirkeby spent his childhood, was a great source of inspiration, just as it may have been the simple fascination of stringing together the 25 x 12 x 6 cm brick elements that result in a variety of shapes and rhythms as well as ornamental sequences, or become ornaments themselves through the cycle of repetition, as Ane Hejlskov Larsen puts it. Until the end of the 1970s, various brick elements were created in the context of exhibitions, only to be dismantled again, so that their only documentation is in photographs. In these presentations, similar to Carl André, it was the search for more horizontality (cf. Carl André, “Equivalent” VIII, 1966, and Per Kirkeby “Kopenhagen II”, 1965) and the artistic confrontation with spatial sectioning, with spatial orchestration. In spite of the “simple” and direct shapes of the brick sculptures of that period Per Kirkeby never allowed for his art to be limited to the term of pure minimal art. To him, his elementary shapes orchestrated in space were also imprinted with the historical, a fact that is also related to his intensive dedication to the architecture of the Maya and the Maya ornaments that can increasingly be made out in his sketchbooks (cf. “Occurrences on the Journey“, 1971). Consequently, his first outdoor brick sculpture was created in 1973 (Huset/The House, Ikast, Denmark), probably being the one most reminiscent of the ornamentation of Maya architecture. Over time, and using project drawings, some of which will be shown in the exhibition, Per Kirkeby developed different variations of shapes that often originate in the square and, in an aesthetic simplification, result in modules, sequences and systems rich in associations and closely related to architecture. In other words, Per Kirkeby progressively reduces the ornamentation of his earlier works to simple geometric basic structures that, in their “serial ornamentation” (repetitive structure), are often reminiscent of the minimalism of American sculptors at the beginning of the 1960s. These project drawings or studies of form on paper are then translated into small-scale sculptures in an expressive immediacy, effectively defining the shape of the brick sculptures as so called Bozzettis (cf. Ulrich Wilmes). Per Kirkeby’s outstanding brick sculptures include, among others: the German Library in Frankfurt am Main (1996), the Antwerp sculpture park (1993), the Goteborg harbor entrance (1992), Vevey/Lake Geneva Nestlé Group (1991), the Stuttgart state parliament (1987), the Rotterdam museum park (1987), the Munster sculpture projects (1986), and the Documenta in Kassel (1982).

Formally separated from the brick sculptures and their models, a series of bronze sculptures were created primarily in the 1980s, centering on the artistic confrontation with physical figuration. The exhibition will include three examples of sculptures from this series: Arm, 1983; Arm and Head V, 1983; and Arm and Head X, 1983. In these sculptures, Kirkeby concentrates on fragmentation as a “metaphorical materialization of entireness” (Ulrich Wilmes), and on the “exaggeration of form” in part also represented in sculptures by Auguste Rodin. While in Rodin’s works the torso itself has become a crucial sculptural mode of expression and the parts of the bodies remain a realistic representation in individual sculptures (cf. “Right Hand” (Museum of Fine Arts San Francisco, and “The Inner Voice”/Musée Rodin Paris), Per Kirkeby models or transforms individual limbs to nearly abstracted plastic shapes that again, as autonomous torsos, either “express” a certain part of the body or, as in the Arm/Head sculptures, merge in unconventional new forms (fragmentary figurations). For example, Ulrich Wilmes describes the sculpture Arm/Head No. 10, presented in the exhibition, as an organically shapeless creation that dissolves the narrative figure of the limb in a less amorphous structure. In his bronze sculptures, Kirkeby is not just concerned with proper form-finding, but also attempts to address the meticulous composition of the surfaces that show erosions and replenishments and unveil the fingerprints of the artist. Thus, relief-like abstract contours emerge on the surface, forming – in interplay with the shape itself – sculptures that, floating between concreteness and abstraction, originate from Per Kirkeby’s deep understanding of the forces of nature. “I often try to apply the opposite of the tactics I use for paintings: namely, approaching the sculpture through trivialities, such as the supporting tree trunk, the lump of rock at the foot.”

Per Kirkeby (born on 1st September, 1938 in Copenhagen, living and working in Copenhagen, Læsø and Arnasco) counts among the most versatile and most prominent representatives of contemporary art in Europe. He was featured in the Documenta in Kassel at several occasions and took part in various Biennales in Venice and Sao Paulo. His works are included, among others, in the collections of the Tate Gallery/London, the Museum of Modern Art/New York, the Metropolitan Museum/New York and the Centre Pompidou/Paris. Solo exhibitions of Per Kirkeby’s works were last shown at Palais des Beaux-Art/Brussels (2012), in The Phillips Collection/Washington (2012), in the Tate Modern/London (2009) and in the Louisiana Museum of Modern Art/Humlebaek (2008).
www.galerie-kugler.at