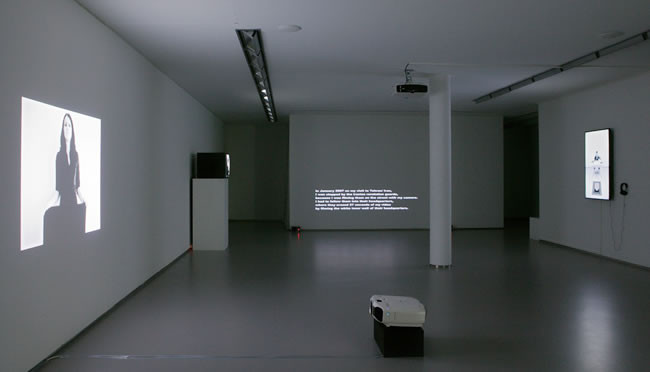 Selma Alaçam was born to a Turkish father and a German mother. Anahita Razmi has a German mother and an Iranian father. Both artists were born and raised in Germany – in a foreign yet familiar relationship to their fathers’ ancestry. On the basis of this biographical background, both artists have developed a subtle and subversive look at the cultural, social and religious particularities of the Islamic world. The images shown in the media foster a stereotypical view of anything foreign and different, a view not corresponding to the emotional and rational reality of the Islamic culture. In their works, Selma Alaçam and Anahita Razmi manifest that the apparently »obvious« socio-cultural phenomenon is in no way obvious. The focus of their interest is the clash of the Islamic and the Western worlds in the present. Their artistic strategies, particularly in the fields of performance, video and photography, aim at raising the questions that remain ignored in European discourse. Their chosen artistic medium is contrast – employed in manifold ways. The following are two examples of the artists’ works shown at the exhibition.

In Selma Alaçam’s heartstrings two different kinds of surface structures meet, but ultimately refuse to become one in spite of their textile interweaving. The carpet (kelim) used for the artwork derives from a Pre-Islamic tradition. Here, the weaver had the rare opportunity to express her own feelings in the carpet’s specific pattern. These carpets were used as decorative ornaments in tents or as blankets and were also regarded as tokens of good luck. Selma Alaçam now embroiders various quotes from pop culture on square fragments of these carpets – such as »HELP ME OUT OF THIS MESS I AM A STRANGER TO MYSELF«. Such lyrical statements reflect the self-reference of the Western individual that juxtaposes the cautious emotional expression of the weaver in the particular pattern of the carpet. The typeface itself – orthogonally arranged sans-serif capital letters – also contrasts with the diagonal jagged layout of the background. Consequently, the viewers gaze sways between a reading aimed at understanding the text, and an undirected look that is lost in the regular movement of the pattern. Only once the words begin to unfold their metaphorical effect, the actual relationship between the text and the pattern in the »picture« becomes apparent: a relationship of mutual estrangement and exasperation.

In her video work How your veil can help you in the case of an earthquake Anahita Razmi sets out to trace a particular »object« – the chador. Usually worn by conservative Muslim women, this dark veil covers the head and body, revealing only a small part of the face. As such, nearly all feminine charms are concealed from public view. Anahita Razmi removes the cloth from the religious context and puts it into a new, purely functional dimension. The starting point for this work was the severe earthquake in the Iranian region of Bam in December 2003, where thousands of people lost their lives. In the black and white video, an attractive young woman of Oriental appearance – portrayed by Anahita Razmi herself – gives eight pantomime-like lectures on how the chador can be used in the case of an earthquake. In her gestures, the artist resembles a flight attendant reacting to the strangely slow recording of a (male?) voice. In view of the real natural disaster, some of the instructions seem grotesque. The veil shall be used as a protective helmet, a flag, or even a handkerchief – in case the mucous membranes are irritated by the dust. Using the veil as a rope, a wound bandage or a blanket may seem to make more sense, but again the instructions are reduced to absurdity due to the strange presentation. Reducing objects mainly to their usefulness is typical of the Western philosophy of enlightening. In this work, Anahita Razmi all at once shows how strange our European way of thinking can suddenly appear.