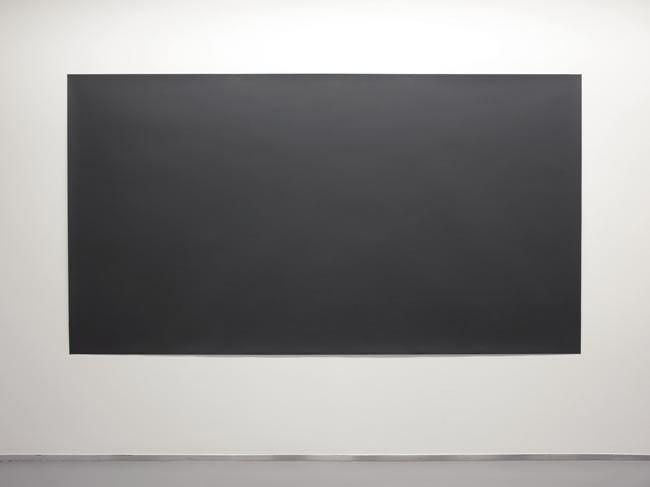 “... And if only I could leave it at that, we wouldn’t have to talk about the ‘pupils' punch holes’ now. It would never have come to a ‘pestle of the iris’.
But come to that, the letter must change its direction here...” (Alexander Konrad)

In his second exhibition in the Galerie Bernd Kugler, Tobias Hantmann displays a row of large-format, single-colour sheets of sandpaper, cut from the roll, which hang unframed on the walls of the gallery. They are monochrome reliefs of differing grain and colour. The impression made by these surfaces, together with their texture and their conceptual connotations, appears at first to be laconic and confusing.
That which previously served as a tool now moves to the centre of this exhibition. As in earlier works, Tobias Hantmann tailors image formats from piece goods. The conditions for the “scene of the picture” here already are pre-determined by the choice of materiality, the colour and the size. However, in contrast to the artist’s previous methods, these sheets have not been processed further; the surface has not been further manipulated.
It is the title of the exhibition, or rather of the pictures, which create the transformation in this case. The three words are taken from an early text by the author Alexander Konrad. “Pistill der Iris” (pestle of the iris) – the eye that literally encounters the surface here, the eye that is thus changed into a tactile organ, indeed almost abused. It is here that a title, a text and a materiality meet. In doing so, linguistic and visual pictures flow into each other and, precisely by these means, each reveal even more clearly their very own characteristics.
The publication “Pistill der Iris” with a text by Alexander Konrad accompanies the exhibition.
Tobias Hantmann studied at the Kunstakademie (Art Academy), Düsseldorf and at the Hochschule der Künste (University of the Fine Arts), Berlin. He lives and works in Düsseldorf and Cologne.
www.galerie-kugler.at