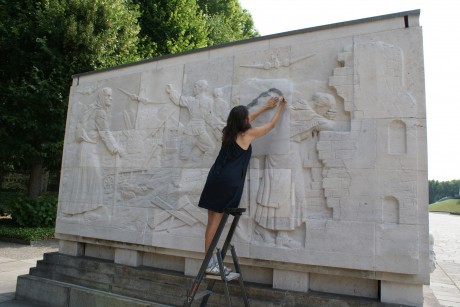 The series Impossible but Necessary comprises a range of works produced between 2010 and 2013 which investigate the unstable balance between desire and frustration inherent in any attempt to communicate an experience verbally or visually. Zaccagnini realised her project at the monumental site of the Soviet cenotaph in Berlin-Treptow, which was built in 1949. The site includes huge concrete blocks reminiscent of sarcophagi, which bear reliefs illustrating the events of war in idealising-allegorical scenes. Zaccagnini’s interest was focused on the numerous images of explosions – moments when material loses its form, which the artist understands as points of abstraction in the narrative pattern. One section of her series, Impossible but Necessary: Petrification, comprises twelve lithographic works that reproduce the explosions depicted on the basis of documentary photographs. At Künstlerhaus Bethanien, she is showing the second part of the series, Impossible but Necessary: après-coup, which consists of twelve frottage drawings. They were produced on paper by rubbing drawing charcoal over the contours on the original site. Completely separated from their original context in this way, the motifs appear to the viewer as abstract and almost decorative, forming spreading constellations like rays or stars, whereas the lithographic process in the complementary Petrification series takes them back closer to their actual context.
A catalogue will be appearing for the exhibition (eds.: Nicola Müllerschön, Christoph Tannert).
www.bethanien.de