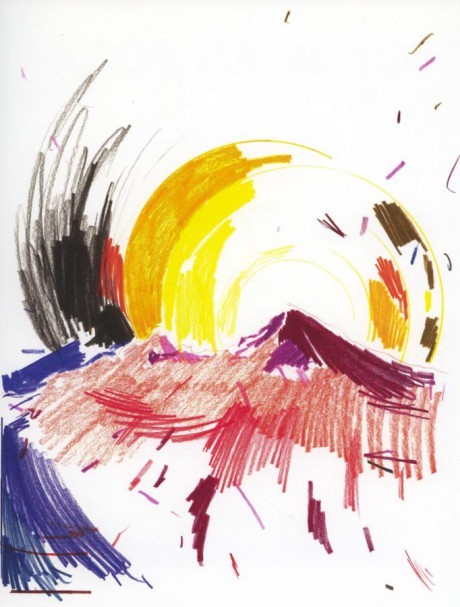 Whether Caspar David Friedrich, Heinrich Reinhold or Ludwig Richter – they all portrayed the Watzmann mountain, which may be regarded as a scene of longing for German Romanticism. Situated only a short distance as the crow flies from Obersalzberg, Adolf Hitler’s later holiday retreat, the area in the foothills of the German Alps has remained a historically significant, charged setting to the present day.
In his artistic work Carsten Fock makes an intense study of this theme – before the background of his own German-German history as well: “He permits a clash of iconography and examines the accident scenes of ideologies: the authentic despair in popular culture interests him as much as the false promises of politics. He is already sceptical because of his own biography – growing up in the GDR, a distorted state, fleeing and never arriving since in his mind he actually wished to go much further than this new Germany, which felt new for while and is now showing more and more just how restrictive it is, how bigotted, how self-satisfied and oblivious to all else.” (Georg Diez on Carsten Fock, 2013)In his exhibition Landschaft und Vergessen (Landscape and Forgetting) Carsten Fock is showing a selection of romantic landscape drawings, portrait drawings of Martin Heidegger, the Berghof, and some abstract paintings that owe a lot to the processual. Here, Fock’s starting point will be a work by Danish painter Per Kirkeby and the latter’s concept of painting and landscape.
www.bethanien.de