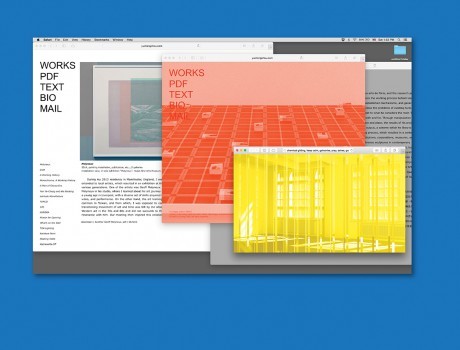 Chou specializes in the interplay between aesthetics and society. His works emphasize the working process behind visual aesthetics, with a focus on producing alternative modes of operation and thought within established mechanisms, and generating alternative, corresponding benefits through “atypical collaborations” which simultaneously disclose the problems of existing conditions. His artworks take various forms, wherein he often plays the role of the “intermediary”, in contrast to what he considers the main “body” of his works—the individuals, enterprises, institutions and organizations that he negotiates with and for.

The exhibition on view showcases two important projects by the artist from recent years and another new endeavour. The longer than usual exhibition title connects with both tangible and intangible elements presented in the exhibition. Molyneux is a project by Chou derived from his studies and interpretations of artworks by Geoff Molyneux, the outcome of which was first presented in the East. Utilizing newspaper classified ads and through collaboration with a writer, the other project, A Working History, presents a realistic labour history based on the experiences of a labourer working in an environment imposed upon him by society. Both projects have evolved from other people’s journeys in life, which are converted by the artist to present the social and institutional realities faced by these individuals.

Chou’s new project shares the same title as the exhibition, and is based on the following three continuous cycles of psychological conditions faced by individuals in social settings: agitation, pray, and keep calm. With some of the tangible elements in the title selectively presented, associations are also extended for the other words in the title that are not shown on site.

Chou Yu-Cheng is a grantee of the Ministry of Culture, R.O.C. (Taiwan). His residence in Berlin is also being kindly supported by the Taipei Representation Office in the Federal Republic of Germany.
www.bethanien.de